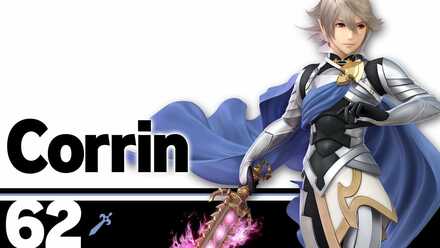 This is a guide to using Corrin in Super Smash Bros. Ultimate. Corrin's bread and butter combos, how to unlock, frame data, alt costumes and skins, as well as Corrin's matchups, counters, and tier list placement can all be found here.

A swordie with great range

Corrin's attacks primarily use their sword, giving them great range on almost every move. Fmash also uses a lance which has even more range on it than regular sword attacks, and hitting the tipper will allow for early KOs.

Corrin's weaknesses are in their below average mobility, and poor disadvantage state. While their recovery grants them invulnerability, it also has rather short range, so they are still susceptible to edgeguarding. Their grab game is also rather mediocre, with low combo ability and only up smash KOing at high percents.

1. -2 = Disadvantage. -1 = Slight Disadvantage or Even. 0 = Even. +1 = Slight Advantage or Even. +2 = Advantage.
2. The matchup chart was based around both the opinions of professional players of each character, as well as our own experience through playing Corrin.
3. Characters within each tier are unordered
4. Pokemon Trainer's individual Pokemon (Squirtle, Ivysaur, and Charizard) as well as Echo fighters with no significant difference than their regular counterpart are not shown.
5. For other characters who are not shown here, we are still investigating the matchup.

Down Tilt into Up Tilt is a great combo to use against low percentage enemies and it launches them into the air as well for more follow ups.

NAir is a great combo starter for Corrin. It doesn't launch enemies too far which makes it easy to chain more moves. Use FSmash if you want to deal more damage immediately or Up Tilt / FAir to chain it into more combos / follow ups.

This combo can quickly rack up damage against low percentage enemies. After the first FAir, wait a little bit before using another jump into FAir and Up Air or the combo will fail.

Hitting the enemy with NAir on their backside will launch them to the opposite side, this can easily be followed up with Corrin's BAir.

After NAir, you can also use Side Special to deal damage and reposition yourself at the same time using Corrin's second side special move.

Similar to NAir, falling FAir can also be used as a great combo starter. Follow up FAir with Up Tilt or FAir for more combo follow ups or FSmash for more damage.

Falling FAir into short hop FAir them jump into another FAir and Up Air to execute the combo. This combo won't work on high percentage enemies.

Corrin has decent out of shield game, mostly relying on neutral air out of shield, since it is their quickest option, has great range, and a long lasting hitbox, which can lead into combos. Their shield grab is not particularly fast, and will not lead to many follow-ups, so it is usually better to stick with neutral air, or not punish out of shield at all.

Corrin's Jab has somewhat quick startup, and decent range, making it useful as a quick get-off-me tool. By mashing the jab button repeatedly, you can unleash a rapid jab to rack up damage. The third hit of the non-rapid jab can KO opponents at high percentages.

Corrin's dash attack has a pretty slow startup, but wonderful range and a long active hitbox, and it can even cross up sheilds, making it a very useful approach tool.

Corrin's forward tilt has good range and quick startup. You can use it to quickly attack backward after dashing away, making it a useful poking tool.

Corrin's up tilt has a fast startup. Since it hits enemies above Corrin, its good both as an anti-aerial and also as a combo starter.

Corrin's down tilt comes out very quickly. While it's not the safest move on shield, its range makes it hard to shield grab, and the angle it sends opponents in is great for combos into aerials.

Corrin's forward smash is a powerful move with a decent ragne and knockback. Enemies hit by the tip also take more damage and more knockback, so spacing the move to aim with the end of the weapon is important.

Additionally, Corrin's FSmash can deal damage while charging. This can be held at the ledge to try and punish a getup option, or even used to break shields by charging right up on a shield and then using the smash attack to finish it off.

The attack's angle can also be changed so aim it accordingly (angle it up against enemies approaching from the air and angle it downwards against short enemies, or ones on the ledge).

Corrin's up smash is a move with decent knockback. Similar to Corrin's FSmash, their Up Smash also has a sweet spot on the attack's tip. However, the base attack's damage still deals decent damage.

Corrin's down smash has a strong knockback. Since Corrin also uses a spear on the attack's backside, it also gains bonus damage from the tip and less damage on the base. Whichever part of the attack hits, the attack is fairly weak, so be ready to follow the opponent offstage for an edgeguard.

Corrin's neutral air has a decent range and hits at a 360 ° angle around Corrin. It's a great spacing tool, and can be used to snuff out an opponent's approach. It can lead into several combos, and can be used reliably out of shield, making it one of Corrin's main neutral tools.

Corrin's forward air is another quick aerial. Since it hits a wide area in front of Corrin, and it doesn't have a lot of end lag, and is -4 on shield, it is a great poking tool.

Corrin's back air is a move with a strong knockback that uses Corrin's dragon wings rather than sword. Corrin's smash attacks can be hard to rely on for KOs at times, and in those instances, back air is a valuable tool for KOing an opponent at high percents, and it doesn't even need to land a sweet spot to do so.

Corrin's up air is a fast move that hits in a wide area above Corrin. It has great knockback, and is used as both a combo finisher and juggling tool, and can KO opponents at decent percents.

Corrin's down air is a plunging attack. Since the landing can deal damage, it can be hard to punish the attack, but since it has a huge endlag, using it repetitively will usually lead to an opponent punishing you for it.

If you use the move high enough in the air, the move will auto-cancel, and you will be able to land on the stage normally.

Corrin's Neutral Special is a 2 hit move that first shoots a water bullet, which is followed up by a bite attack. The bullet can be charged before being fired, while the bite attack can be charged before or after firing the bullet. The bullet's stun effect is short so use it without charging as a long ranged poking tool for the most part. It can also be fired offstage to hit opponents trying to recover.

Corrin's Side Special allows Corrin to fire a spear diagonally at the chosen direction. If it hits the ground, you can move sidewards to kick in that direction. When you hit tan opponent, as well as a wall or the ground, Corrin pauses in the air, and pressing left or right will initiate a kick, while up makes you jump, and down will cancel the move.

The spear hit also has a sweet spot so it can be used to poke enemies while in the air. Hitting an enemy briefly stuns them, allowing you to connect the kick afterward.

Corrin transforms into a dragon to fly a short distance. The flight can be slightly adjusted by moving left or right. The move also has intangibility from frame 7, so it can be used as an out of shield option (though the attack comes out quite late), as well as a recovery tool.

Corrin's counter move. If the counter triggers, the enemy will be launched vertically, so if you can bait the enemy into attacking you up in the air, and then using it as a mixup to get a surprise KO.

Corrin's forward throw knocks opponents forward. It can't be used for combos so use it to throw enemies offstage. Also, the grab's spear hit has a sweet spot at the tip, so hitting enemies with it can knock them back further.

Corrin's back throw knocks enemies backwards. Use it to throw enemies offstage. Similar to Corrin's Fthrow, their backthrow's spear hit also has a sweet spot so enemies hit with it will get knocked back further.

Corrin's upthrow launches enemies vertically. It can' be used for combos but it is very powerful, and can reliably kill opponents around 160%. Use it to put an opponent with bad disadvantage into the air.

Corrin's down throw launches enemies diagonally upwards. It can't be used for combos but the grab's attack has a large hitbox and it can hit other opponents near you if playing outside of a 1v1.

How to Unlock Corrin

There are three ways to unlock Corrin. Completing any of these, then defeating Corrin when they appear in the “a New Challenger Appears” screen will allow you to use them afterward. 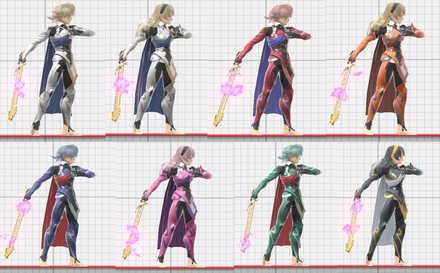 In order for us to make the best articles possible, share your corrections, opinions, and thoughts about 「Corrin Guide: Matchup Chart and Combos | Super Smash Bros Ultimate」 with us!