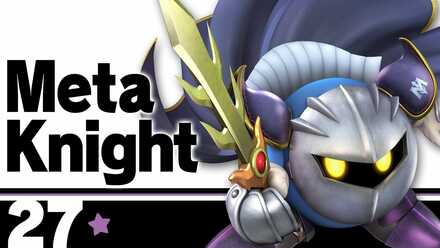 This is a guide to using Meta Knight in Super Smash Bros. Ultimate. Meta Knight's bread and butter combos, how to unlock, frame data, alt costumes and skins, as well as Meta Knight's matchups, counters, and tier list placement can all be found here.

A combo heavy character who excels in the air

Smash Ultimate Meta Knight is a character with access to several combos for damaging opponents and taking stocks. In order to make the most of this character, Meta Knight players will need to factor in their opponents' weight and percents in selecting the best combo for a situation. He is a somewhat difficult character to master, so those who want to main Meta Knight will need to put significant time into locking down his combos.

1. -2 = Disadvantage. -1 = Slight Disadvantage or Even. 0 = Even. +1 = Slight Advantage or Even. +2 = Advantage.
2. The matchup chart was based around both the opinions of professional players of each character, as well as our own experience through playing Meta Knight.
3. Characters within each tier are unordered
4. Pokemon Trainer's individual Pokemon (Squirtle, Ivysaur, and Charizard) as well as Echo fighters with no significant difference than their regular counterpart are not shown.
5. For other characters who are not shown here, we are still investigating the matchup.

An easy Metaknight combo. Depending on the opponent's position after down throw, dash to move forward some and then throw out an up special. Up special has ending lag, so when an opponent is at a low percentage, use up tilt instead of up special.

Down Throw→Fair or Reverse Bair

This will send the opponent flying to the side, so depending on the starting position you may send them over the edge.

This combo can be used on opponents with lower percents.

Dash Attack→Up Tilt or Up Special or Up Air

A combo that starts with dash attack.

When an opponent is down, this combo is effective (does not work if oppoenent techs). Use this combo to kill opponents with high percents.

An effective Metaknight combo to rack up high damage. Practice using it in Training Mode to perfect it.

A killing combo. This combo can be used even if the first hit is back air.

This combo only works against large opponents, but landing the reverse hit of up air will allow you to kill opponents.

Meta Knight's quick frame data gives him decent out of shield options, although his small hitboxes can make them hard to effectively land on an opponent, especially aganst well spaced attacks. While down air is his fastest option, generally up special, up smash, or neutral air will his go-to out of shield moves. Up special is very quick, and powerful if landed, but whiffing it will leave Meta Knight quite vulnerable, so it should be used with caution (after considering risk/reward). Up Smash has a decent hitbox above Meta Knight, so it can be used for opponents above him. Neutral air, while a bit slower than the other options, is a great option out of shield, thanks to its long lasting hitbox and high knockback.

Meta Knight's Jab starts with a hit and then a flurry that deals a blow that knocks your opponent back horizontally. The rapid jab begins immediately after starting the move, so beware of endlag.

Meta Knight's Dash Attack has him kicking forward as he flies towards his opponent. It is one of his combo starters, so mix up dashing at an opponent with either dash attack or grab→down throw.

Meta Knight's Forward Tilt is a a three-hit combo that launches your opponent at the end. You can use it to poke at opponents since the first hit has little end lag, and it functions similarly to a jab.

Meta Knight's Up Tilt has him thrusting his sword into the air. It is good for starting air combos, but it has a narrow hitbox, so it it hard to hit opponents on the side of Meta Knight. It makes for a great combo starter if your opponent is directly above you.

Meta Knight low to the ground with his sword. Its quick startup and decent range make it good as a poking tool for pressuring shields. It is also useful as a combo starter.

Meta Knight's Forward Smash is great for knocking opponents away horizontally, and since it has very little endlag, it can be used to pressure opponents as well.

Since Meta Knight's Up Smash starts up quickly, it can be used out of a dash or as an out of shield punish.

Meta Knight's down smash attacks on both sides of him. Note that his back hit is stronger than his front hit, so if you want KO an opponent, be sure to hit your opponents with the back hit. It has very quick startup, and is useful for catching rolls, or as a quick whiff punish.

Meta Knight's Neutral Air has quick start up, and a hitbox surrounding Meta Knight, so it can be used to edgeguard, or ledgetrap opponents, thanks to its powerful knockback.

Meta Knight swings his sword three times forward in the air. Meta Knight's forward air has excellent range and knockback, and will swipe three times. It is mostly used as a tool for pressuring opponents, or as a combo finisher offstage.

Meta Knight swings his sword repeatedly behind him. Meta Knight's back air has excellent range and knockback, and can be used to KO opponents in a combo, and it is also great for edgeguarding opponents offstage.

Meta Knight swipes his sword above him, and when used with his multiple jumps, can be used to rack up damage and juggle opponents. Especially if platforms are present, Meta Knight is capable of using ladder combos to lift the opponent high up and finish them off with an up special.

Meta Knight's down air is extremely quick. Meta Knight swipes his sword below him, and the move is mostly used to carry opponents upwards and continue comboing them.

All of Meta Knight's specials render him unable to jump afterwards.

Mach Tornado makes Meta Knight spin around in a tornado, where he can either remain in place or move around quickly. It can be used to KO due to its high knockback, as well as edge uard if you tap B constantly midair, as it lifts you up if you do so. If you hit the wall while performing the edge guard, you are more than likely going to bounce off and fall to your death, so be mindful of your own position.

Drill Rush has Meta Knight charge forward with his sword in a drilling motion, able to go diagonally up or down. It deals strong damage and knockback, but has a lot of startup and ending lag, so be careful not to use the move recklessly.

Shuttle Loop comes out quick and carries Meta Knight high, and is a decent recovery. It can be used out of shield to KO opponents at higher percents, though it is easily punish if whiffed. For the most part, it is used as a combo finisher after lifting opponents high into the air via up airs and Meta Knights multi-jumps . For recovery, use this only after you've exhausted all your jumps, as you cannot jump after performing this.

This technique allows you to warp in the direction you like, making it good for closing or making distance, and if the button is held, Meta Knight will teleport back with an attack, though the warp distance will be somewhat shorter. It can be used to KO opponents, or to mix up your landing.

Meta Knight's Forward Throw slightly launches your opponent forward, allowing you to follow up into with a dash attack

Meta Knight's Back Throw deals more damage than forward throw, but is similar in terms of knockback. It is mostly only used for gaining stage control or puttng an opponent offstage.

Meta Knight's up throw will put an opponent above him, but it does not combo into anything, so it is usually a throw that is best not to use.

Meta Knight's down throw is a multihit combo has Meta Knight repeatedly kick his opponents under him then launch them slightly. It is useful as a combo starter.

How to Unlock Meta Knight

There are three ways to unlock Meta Knight. Completing any of these, then defeating Meta Knight when they appear in the “a New Challenger Appears” screen will allow you to use them afterward.

Register as a member and get all the information you want. (It's free!)
Login
Opinions about an article or post go here.
Opinions about an article or post
We at Game8 thank you for your support.
In order for us to make the best articles possible, share your corrections, opinions, and thoughts about "Meta Knight Guide: Matchup Chart and Combos" with us!
When reporting a problem, please be as specific as possible in providing details such as what conditions the problem occurred under and what kind of effects it had.