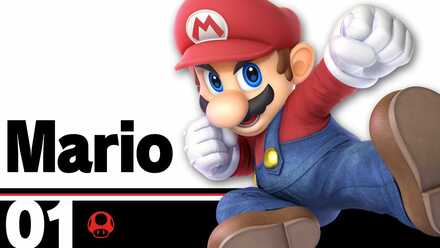 This is a guide to Mario in the game Super Smash Bros. Ultimate. Everything about Mario, including how to unlock them, bread and butter combos, frame data, alt costumes and skins, as well as Mario matchups and counters, can be found here.

An easy to use all-arounder

Smash Ultimate Mario is a relatively straight forward all-around fighter. Matchup wise, he can more or less battle with any other character on a mostly even playing ground, and doesn't rely on a heavy gimmick. While his range is not quite as good as many other characters, his moveset gives him access to a wide variety of combos, which when utilize can deal devastating damage and take stocks from his opponents.

1. -2 = Disadvantage. -1 = Slight Disadvantage or Even. 0 = Even. +1 = Slight Advantage or Even. +2 = Advantage.
2. The matchup chart was based around both the opinions of professional players of each character, as well as our own experience through playing Mario.
3. Characters within each tier are unordered
4. Pokemon Trainer's individual Pokemon (Squirtle, Ivysaur, and Charizard) as well as Echo fighters with no significant difference than their regular counterpart are not shown.
5. For other characters who are not shown here, we are still investigating the matchup.

Mario has great frame data and a very versatile kit, which gives him a pretty good matchup spread. He truly shines in his advantage state, where he can rack up tons of damage or even KO in a single combo. This makes big body characters like R.O.B. or Ganondorf easy for him to deal with. His reflector is also great against a large part of the cast, giving him great options for dealing with zoning based characters.

Mario's biggest weakness is his short range on his attacks. Sword characters like Shulk, Cloud, or Lucina can outspace his aerials with their swords, allow them to snuff out his main approach options. One of Mario's greatest strengths is how safe his aerials are on shields, making them hard to punish for most characters. However, characters with very fast out of shield options, like Mr. Game & Watch, make Mario have to play a totally different neutral.

How to Beat Mario

As mentioned earlier, Mario's greatest weakness is his poor range. He has very quick aerials that are safe on shield, so the key is to try and use a disjointed hitbox to outspace these attacks, if you have one. This will allow you to beat out his attempts to combo you with his aerials or a grab.

If Mario is comboing you in the air, you can often DI away from him to escape the combo (by holding the stick in the opposite direction of Mario). However, there are times when you should instead DI inward, such as when you are near the ledge, and he might combo you into a Fair, which can spike.

Watch out for his edgeguarding

Mario has decent edgeguarding game that he can use to KO you offstage. Recover low when possible to avoid FLUDD, but note that he may jump down and try to use cape to reverse your direction, so try and work around this, or even recovery after it hits you by B-Reversing.

Mario has great out of shield options, with Up B coming out at frame 3, making it one of the fastest OOS options, meaning it can punish many unsafe attacks, although it is not always the best punish. Coming in at only 6 frames is Nair, which is a great oos punish option to send opponents away and potentially set up for a jab lock.

With its extremely quick startup, Mario's jab is an excellent get off me tool. This move is especially good to use when landing, against opponents who are trying to catch Mario as he touches the ground.

Mario slides in the direciton of his run and slides with a kick. It has pretty quick startup, and a long lasting hitbox, making it excellent for for catching landings, and even 2-Framing opponents.

Mario kicks forward. This move has decent range, and quick startup. This move is good if you need to space out your opponent, if they are trying to get in too close. It can even be angled upward or downward, but not that it is not safe on shield.

Mario punches upward, sending an opponent up. This move is excellent as a combo starter, as it will send opponents directly above him.

Mario sweeps his leg under an opponent, sending them upward and setting up for a combo.

Mario attacks forward with the fire effect directly in front of him for a powerful smash. The end of it does more damage and knockback, so be sure to space it correctly when using it.

At only 9 frames, this is a quick smash attack that attacks above mario, and grants his head invulnerability during the move. Excellent for attacking opponents directly above you, and as an out of shield punsh for a poorly spaced move on shield.

Mario kicks on either side of him. The back end hit box is actually stronger than the front one, so if you want to KO with it, you are better off using it while turned away from your opponent.

This is one of Mario's best tools, as it has a long lasting hitbox, and very quick startup. It is extremely safe on shield when spaced properly (-2/-3), so most opponents won't be able to punish it if used to pressure their shield. It's fast startup also makes it useful as a combo breaker for an opponent that misses their confirm. It functions as a good out of shield option as well (at just 6 frames), and is also good for ledge trapping.

Mario punches downward, which will spike an opponent if hit with the sweetspot hitbox. This move is an excellent combo finisher, sense it can end an opponent's stock, and it is also useful for edgeguarding in general.

Another aerial with quick startup, Mario extends his body and kicks behind him. This move has decent range, and is very safe on shield (-2/-3), making it excellent for poking an opponent and applying pressure. It can even KO at higher percents, so this is an excellent move for Mario players.

Mario kicks the area above him and sends the opponent slightly up, making it very useful as a combo extender, and essential to his combo game. Use this move to juggle opponents, and it can even be used together with platforms to combo into an Up B for a ladder combo confirm.

This move has a long hitbox, and can send opponents pretty far, making it a good KO move at higher percents. You can also land with it and the last hit will change slightly, making it good against opponents trying to catch your landing.

Mario throws a fireball ahead of him, which travels far ahead and bounces. Mario can follow the fireballs and use it as an opporunity to get in.

Mario's recovery is also a pretty good move for sending opponents upward, and is used as a combo finisher (especially on stages like Battlefield that have platforms). It has a very fast startup, and also works well out of shield. When recovering, it can sometimes even lead to a reverse edgeguard if the opponent isn't careful, as it can easily stage spike.

Mario uses F.L.U.D.D., which can be charged to fire water at an opponent. While it doesn't deal any damage, it is very good in particular matchups, like against Ike or Snake's recovery. It is also good for gaining stage control, so be sure to charge it up when you have time.

Launches an opponent forward. Not particularly good for KOing, so it is mainly used for stage control or to throw an opponent offstage.

Spins an opponent and throws them behind Mario, and can KO at higher percents. If playing a free for all, it will even hurt other nearby opponents if they are pulled in.

Throws an opponent up and allows for a follow up with up air or up B.

This throw is used as a combo starter, and is easily comboed with Up B. 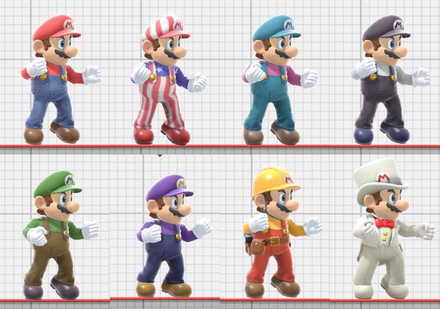 In order for us to make the best articles possible, share your corrections, opinions, and thoughts about 「Mario Guide: Matchup Chart and Combos | Super Smash Bros Ultimate」 with us!