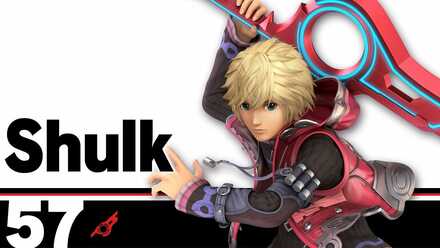 This is a guide to using Shulk in Super Smash Bros. Ultimate. Shulk's bread and butter combos, how to unlock, frame data, alt costumes and skins, as well as Shulk's matchups, counters, and tier list placement can all be found here.

A versatile fighter with 5 attributes to choose from

Smash Ultimate Shulk has the unique attribute of the Monado Arts, which allow him to change between 5 attributes: Buster (deals more damage), Smash (Deals more knockback), Shield (takes less damage and knockback), Speed (increased movement speed), and Jump (increased jump height). These allow for a unique playstyle where Shulk can choose the correct art for any given situation. His long range on his sword allows him to space his attacks, and thanks to Smash, he can reliably KO opponents before 100%. Shield also allows Shulk to cancel combos, giving him extreme survivability.

Shulk is a wonderful character, but rather high execution. Shulk players will really need to understand when to use the correct Monado Art in a given situation. Shulk also has poor frame data, meaning that correct spacing is essential to avoiding getting punished. His recovery is somewhat mediocre, so without the Jump art active, he may have a hard time getting back on stage. But, if you can properly manage use of the Monado, Shulk may just be the character for you.

1. -2 = Disadvantage. -1 = Slight Disadvantage or Even. 0 = Even. +1 = Slight Advantage or Even. +2 = Advantage.
2. The matchup chart was based around both the opinions of professional players of each character, as well as our own experience through playing Shulk.
3. Characters within each tier are unordered
4. Pokemon Trainer's individual Pokemon (Squirtle, Ivysaur, and Charizard) as well as Echo fighters with no significant difference than their regular counterpart are not shown.
5. For other characters who are not shown here, we are still investigating the matchup.

Shulk's aerials all have slow startup, which leaves him with poor out of shield game. The only good out of shield option he really has is his up special, which has good range and knockback, but is very punishable if whiffed. His shield grab is 11 frames and has decent range, but won't be able to reach opponents that are spacing their attacks.

Shulk's jab has a relatively quick startup. Since Shulk lacks a lot of moves that can come out quickly, this move can be used in a pinch to push out opponents that have broken Shulk's spacing.

Shulk's dash attack has great damage output and range. By combining it with the Speed Art of his Neutral Special, the dash attack increases in range and mobility, making it a great tool for catching landings.

Shulk's up tilt has a wide vertical range, which makes it incredibly useful as an anti-air attack or to trap landings.

Shulk's down tilt has great range, short startup and little end lag, but weak knockback. It's primarily used as a poking tool, but can also lead into aerial combos.

Shulk's forward smash has amazing range and deals heavy knockback, but the lengthy end lag leaves Shulk completely exposed. Forward smash is normally only worth throwing out when combined with the Smash Art of his Neutral Special, which further increases his knockback and KO potential, thus making the move a high risk/high reward type attack.

Shulk's up smash is similarly great for range and knockback. Like Shulk's Forward Smash, the move is a bit risky, due to its lengthy end lag. It can be used to catch an opponent's ledge jump, or for reading an opponent's aerial approach.

Shulk's down smash is a multi-hit spin attack that covers a great distance. It does great shield damage, and can be used to catch an opponent’s roll or spotdodge, thanks to its long lasting hitbox. It has a very long endlag, so be careful not to throw it out recklessly.

Shulk's neutral air covers the complete 360° range around him. It has a slow startup, but the excellent range and fact that it is -2/-3 makes it one of Shulk's primary poking tools.

Shulk's forward air similarly has a wide range, and can also be used as a poking tool. The main differences between Nair and Fair are the motions of the swings, and the fact that Nair covers a much wider range. Therefore, neutral air is good to use as a rising aerial, while forward air is good to use when combined with a fast fall.

Shulk's back air has great range and knockback, but a slow startup. It's mainly used as a KO move that doesn't rely on use of the Smash Art from his Neutral Special, since its so strong without any Monado Arts equipped.

Shulk's up air has a long vertical range. It attacks directly upward, which makes it good for attacking enemies on platforms above you, as well as for juggling opponents in disadvantage.

Shulk's down air has a meteor hitbox and a long downward vertical range, which makes it good for edgeguarding.

Shulk's neutral special allows him to switch between the Monado Arts for effects that act as a trade-off, granting buffs to certain stats, while nerfing others in exchange. You can access the Monado Arts effect wheel by pressing and holding the special button, which then allows you to switch between them using the control stick. To end the current active effect, press the special button three times. The list of effects are as follows:

Side Special (Back Slash)

Shulk jumps and slashes his opponent in his side special. Slashing the opponent from behind will increase damage and knockback dealt. The move can be used as a recovery, but note that it does not sweetspot ledges. However, if used from about the height of a full hop combined with mid-air jump, it will be able to grab the ledge.

Shulk's up special is to perform an uppercut with his sword. The height of the special can be raised when combined with the Jump Art of his Neutral Special. There is no lateral movement, so be careful when trying to use it for recovery.

The special can also be used as a KO move, especially when used as an out of shield punish, thanks to its fair knockback. Combine it with the Smash Art of his Neutral Special, and you have a reliable KO move that can finish an opponent at around 100%.

Shulk's down special is a counterattack that launches the opponent forward. It has a lengthy counter window compared to other counterattacks, but if used repeatedly, it will gradually shorten. The window gradually recovers when not in use, so try not to spam it.

Holding forward on the control stick at the moment the counter is activated will result in a slash attack dealing greater damage and knockback. This attack launches the opponent backward as well, so it can sometimes lead to a one-shot reversal when used near a ledge.

Shulk slashes forward, launching his opponent. Even at a short distance from the opponent, it can't be used for combos. Use it when you want to throw your opponents off the stage.

Shulk jabs behind him, launching his opponent backward. Like the Forward Throw, it can't be used for combos, even at a short distance from the opponent. However, it does have a stronger knockback than the Forward Throw, and when combined with the Smash Art of his Neutral Special, it can KO opponents very early near the ledge.

Shulk launches his opponent upward. It's good for juggling or for connecting to a variety of aerial combos.

Shulk slams his opponent downward with his sword and sends them upward. It can be used as a combo starter when combined with the Buster Art of his Neutral Special.

How to Unlock Shulk

There are three ways to unlock Shulk. Completing any of these, then defeating Shulk when they appear in the “a New Challenger Appears” screen will allow you to use them afterward. 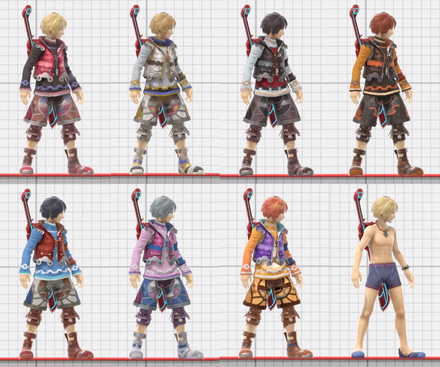 Register as a member and get all the information you want. (It's free!)
Login
Opinions about an article or post go here.
Opinions about an article or post
We at Game8 thank you for your support.
In order for us to make the best articles possible, share your corrections, opinions, and thoughts about "Shulk Guide: Matchup Chart and Combos" with us!
When reporting a problem, please be as specific as possible in providing details such as what conditions the problem occurred under and what kind of effects it had.