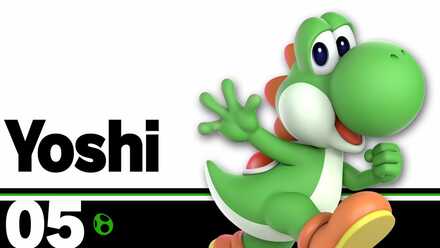 This is a guide to Yoshi in the game Super Smash Bros. Ultimate. Everything about Yoshi, including how to unlock them, bread and butter combos, frame data, alt costumes and skins, as well as Yoshi matchups and counters, can be found here.

A fighter with excellent aerial abilities

Smash Ultimate Yoshi has the highest jump ability of all characters, combined with his floatiness and super armor on his double jump, which makes it easier for him to recover. Additionally, he has several fast moves with low startup, moves with long-lasting hitboxes like his neutral and back air, as well as a spike with forward aerial. His kit also make it easy for Yoshi to knock opponents above him, which he can then KO by using his up aerial.

While Yoshi possesses good poking tools and a projectile (Up B), his weaknesses primarily rely in his difficulty with approaching opponents, which can be especially difficult against opponents with superior range (such as swordies or characters with projectiles). While he has a great jump, his recovery itself is rather small, meaning that he is not totally immune to getting edgeguarded, although the super armor on his jump does mitigate this a bit.

1. -2 = Disadvantage. -1 = Slight Disadvantage or Even. 0 = Even. +1 = Slight Advantage or Even. +2 = Advantage.
2. The matchup chart was based around both the opinions of professional players of each character, as well as our own experience through playing Yoshi.
3. Characters within each tier are unordered
4. Pokemon Trainer's individual Pokemon (Squirtle, Ivysaur, and Charizard) as well as Echo fighters with no significant difference than their regular counterpart are not shown.
5. For other characters who are not shown here, we are still investigating the matchup.

Thanks to his low fall speed on top of super armor on his double jump, Yoshi can be hard for many characters to combo or edgeguard, so he will give characters like Sheik or Bayonetta a hard time. He also has excellent air speed and frame data, allowing him to fight back against many characters who mainly rely on aerials for approaches, such as Jigglypuff and Peach. His Nair is also super quick out of shield, allowing him to punish characters who don't have reliable safe options to approach with.

Yoshi really struggles against two archetypes: zoners and swordies. He has a hard time dealing with projectiles, since his only option is really to shield or full hop over them, and his own projectile is very unsafe on shield. His aerials have rather poor range, and will always be beaten out by disjointed hitboxes on characters like Lucina, Palutena, or Shulk.

How to Beat Yoshi

As mentioned above, Yoshi struggles with range, so using projectiles or a spaced disjoint such as a sort is hard for him to deal with. Yoshi want to be up close to land one of his many combo moves such as an aerial or Ftilt, so play defensively and zone him out via projectiles or whatever disjoints you have in your kit.

Yoshi has a unique egg shield which prevents shield pokes. On top of this, his Nair is an extremely good out of shield option that most Yoshis will make heavy use of. If the Yoshi is shielding, again, try and attack using safely spaced moves (such as a disjointed fair, etc) in order to bait the move out, and then punish him if he misses the attack. Nair OOS is an important part of Yoshi's gameplan, so be sure to respect the move.

Additionally, Yoshi has rather poor grab game, and no KO throws, so when you are unsure what to do, it's fine to use your own shield and see what options the Yoshi likes to pick. While he can still read this and come in for a grab or neutral B, it is usually much better than getting ftilted into a KO confirm.

At only 6 frames, Yoshi's neutral air is a great option for punishing unsafe moves that hit his shield. It will be your primary OOS option, and can set up for a jab lock as well. A shield grab is 18 frames, and not very good as an out of shield punish.

Yoshi's jab is extremely quick, making it a good get-off-me tool. It doesn't have too much endlag, so it's pretty low risk to throw out. If hitting on a shield, you can choose to throw out both attacks or mix it up and stop after the first.

Yoshi's dash attack deals considerable damage and has a very long hitbox. It will send opponents up and away, so you can follow it up with a forward air for a spike.

A very fast move, which is excellent as a combo starter. Unlike most forward tilts, it will send the opponent above Yoshi, allowing him to connect with an aerial.

Another fast move move which sends an opponent upward. Although weaker than Ftilt, it has less endlag, allowing for more follow-ups.

A quick move which sends an opponent low, and can set up for a jab lock. It is -9 on shield, so if spaced properly, can be hard to punish.

A powerful move with good range that sends an opponent forward. While the hitbox is active, Yoshi's head is invulnerable, allowing it to beat out weaker moves. It can also be angled upward or downward, but note that the hitbox closest to Yoshi is stronger than the one on the tip.

Yoshi's up smash has decent damage and knockback. It doesn't give Yoshi invulnerability, so it will lose to many aerials, but it is relatively fast, and can be used as an out of shield punish.

Yoshi's fastest smash attack, this move hits on both sides of Yoshi. It doesn't send opponents super far, but it can be used to catch a roll.

A very quick move, which is great as an out of shield punish, as well as a combo breaker. It is his weakest attack, but it can set up for a jab lock. Additionally, it is very safe on shield (-3/-34), making it difficult to punish.

A very strong move, which also has a meteor hitbox on the tip. Very powerful and great for onstage KOs and edgeguarding, and its hitbox covers a wide area.

A very powerful move, which hits three times, and is useful for edgeguarding.

A fast move that deals good damage and dends an opponent upward. It is a very useful combo move, and good for juggling opponents. Up tilt can combo into it for a KO.

A mutli-hit move with a long hitbox that can deal a ton of damage. While its startup is pretty long, it can deal 30% if every hit connects. A very rewarding move if it hits, but it has considerable landing lag, and is unsafe on shield, so it is punishable. Using it at the same time as a shorthop will also allow you to cancel some of its lag.

A command grab which will turn an opponent into an egg, allowing for a follow up attack, such as a smash attack. The damage dealt to an opponent turned into an egg will be decreased, and they won't take any knockback. The more % an opponent has, the longer they will remain in egg form. If used on an opponent with high % offstage, they may be unable to recover (especially if they have a poor recovery). As a command grab, it can be used on a shielding opponent.

Yoshi turns into an egg, and the faster he rolls, the more damage he will deal. If used in the air, it doesn't have a hitbox until landing, so it isn't a good option for getting out of disadvantage. While in egg form, pressing B again after some time has passed will allow you to cancel it. It can cross shields, but it is extremely predictable, and for the most part, there are no situations where it should be used.

Yoshi's up special throws an egg while slightly lifting him upward, so it is useful as a recovery (although the distance Yoshi moves is very small). Holding the button longer will allow the egg to go further, and moving the stick lets you change the trajectory. A good option for hitting opponents from afar, and can be used for ledgetrapping.

Yoshi will do a hip drop to the ground. While using it to drop to the ground has a lot of endlag, it does release stars on both sides of Yoshi, which can stun an opponent. It does a ton of shield damage, and can break shields if landed directly on top of one.

While not used in any combos, it can give stage control, and if used near the ledge, can KO at higher percents.

Like forward throw, it is not used in any combos, but it can give stage control, and if used near the ledge, can KO at higher percents.

Throws an opponent up into the air. Doesn't lead to any combos, and cannot KO, so it is really only useful for putting characters with bad disadvantage above you.

Yoshi's most useful throw is his down throw, which will combo into up air, allowing Yoshi to deal decent damage.

How to Unlock Yoshi in World of Light

In World of Light, Yoshi can be found on Ribbon Road. Head toward this area and defeat Yoshi in order to gain use of him. 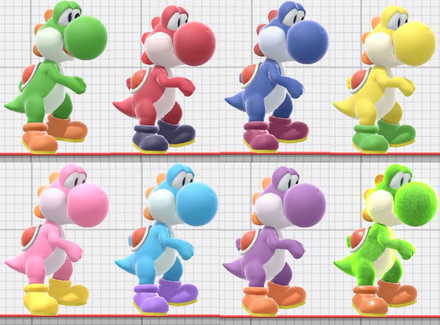 Register as a member and get all the information you want. (It's free!)
Login
Opinions about an article or post go here.
Opinions about an article or post
We at Game8 thank you for your support.
In order for us to make the best articles possible, share your corrections, opinions, and thoughts about "Yoshi Guide: Matchup Chart and Combos" with us!
When reporting a problem, please be as specific as possible in providing details such as what conditions the problem occurred under and what kind of effects it had.