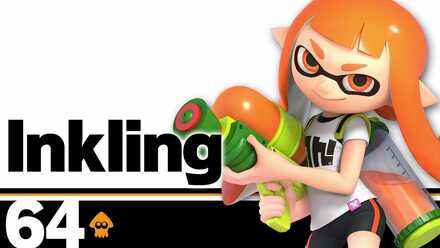 This is a guide to using Inkling in Super Smash Bros. Ultimate. Inkling's bread and butter combos, how to unlock, frame data, alt costumes and skins, as well as Inkling's matchups, counters, and tier list placement can all be found here.

A quick character with a unique ink mechanic

Smash Ultimate Inkling is one of the quickest characters in the game, excellent in their movement and frame data. They have several versatile moves, such as their quick Nair, their down special and Fair (both good for poking), and their side specialーwhich can bury opponents to lead into an up smash. Their unique ink mechanic allows them to ink opponentsーwho will then take additional damage from incoming attacks. Inkling boasts great speed, combos, as well as recovery, making them a powerful and balanced figher.

Their main weakness comes from struggling to kill, since most of their KO options are punishable. Roller can be shielded, and since many inklings rely on it for KO's, it leaves them open to a punish. Their out of shield options are also somewhat limited, with their fastest option at 9 frames. Still, if these weaknesses are managed, Inkling is a great character with many good matchups.

1. -2 = Disadvantage. -1 = Slight Disadvantage or Even. 0 = Even. +1 = Slight Advantage or Even. +2 = Advantage.
2. The matchup chart was based around both the opinions of professional players of each character, as well as our own experience through playing Inkling.
3. Characters within each tier are unordered
4. Pokemon Trainer's individual Pokemon (Squirtle, Ivysaur, and Charizard) as well as Echo fighters with no significant difference than their regular counterpart are not shown.
5. For other characters who are not shown here, we are still investigating the matchup.

How to Refill Ink as Inkling

Refill by pressing B while shielding 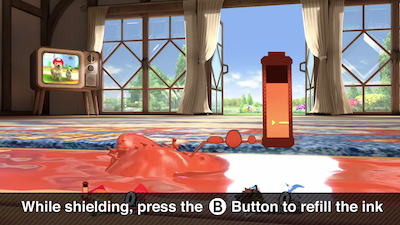 When Inkling runs out of ink, they can replenish their ink tank by holding shield and pressing B. Since most of their attacks use up ink in order to do more damage to opponents, wait for a chance where you are safe from your opponent and refill!

Inkling's out of shield options are somewhat limited. While neutral air comes out decently quick, its hitbox hits the area slightly above Inkling, making it hard to hit characters that are not extremely close, especially on shorter characters. Up smash can be used to hit an opponent directly in front of an opponent, but the later hitbox is much slower, so it is only good for opponents very close to Inkling, and whiffing the move leaves them open for a punish. Inkling benefits a lot off a grab, so it is a decent option, though at 12 frames, it is not extremely quick either.

Inkling's Jab is fast and is an excellent move to use to apply ink to the enemy. Anything past the 2nd hit has long endlag, so make sure to use a rapid jab after confirming that the 1st jab landed on the opponent.

Inkling's dash attack is useful for chasing enemies that get knocked back horizontally, as well as a great techchase option. It can cross up shields as well, making it a good mixup option for a shielding opponent with no backward facing OOS option.

Inkling's forward tilt is a strong move with decent startup. The tip of the gun has a hitbox, making it useful for spacing out opponents.

Inkling up tilt can combo into itself at lower percents, and can easily be followed up by an aerial attack. Be careful as it can't hit enemies that are small or are lying close to the ground.

Inkling's down tilt is a very fast move. Since it shifts Inkling's hurtbox close to the ground, it can be used to dodge an opponent's attack while delivering one of your own. Its quick startup and long lasting hitbox make it a great grounded option.

At mid percents, it knocks back enemies slightly, and if they fail to tech, it can set up for a jab lock into a smash attack, so utilize this opportunity when it appears.

Inkling's forward smash has great range. The move also has a sweet spot at the tip which grants more knockback, but it can weaken if you run out of ink.

Inkling's Up Smash knocks enemies directly upward. It has rather low knockback if you fail to land the clean hit. To ensure a clean hit, make sure to hit the enemy with the 1st hit of up smash (the swinging animation that hits in front of Inkling).

Similar to forward smash, Inkling's up smash also gets weakend when you run low on ink.

Inkling's down smash has an excellent range. During down smash, the bucket's hit has a strong knockback, but the ink it applies to the enemy is low.

Similar to their other smash attacks, Inkling's down smash also gets weakened when they runs out of ink.

Inkling's neutral air is their fastest aerial. It can hit in front and behind of Inkling, so it can be used as a get-off-me tool, but its hitbox is quite high so it's difficult to land against enemies on the ground, making it somewhat limited as an out of shield option.

Inkling's foward air has excellent range and a long lasting hitbox, so is mainly used as a poking tool and for edgeguards. It has long landing lag, so it's best to use the rising version of the move by pressing A+→ at the same time of your jump, to reduce the end lag.

Inkling's back air has fast startup, a long active hitbox, good range, and short endlag. It is extremely safe on shield, making it a wonderful poking tool, as well as Inkling's best move for edgeguarding opponents offstage.

Inkling's up air has a good vertical range. While somewhat slow on startup, it's pretty easy to hit due to its 180° degree hitbox and long active hitbox. It can be used as a KO option, and can confirm from an up throw.

Inkling's down air has the ability to meteor smash. It cab be somewhat difficult to land a KO, with Inkling so make sure to go for a spike when an opportunity appears.

Inkling's Neutral Special is a move that shoots ink from their gun. Inked enemies take more damage, with a max multipier of 1.5x. There is a limit to the amount of ink you can use before running out and needing to recharge, so beware of overusing this move.

Inkling's sidespecial uses a roller to run over enemies. Enemies that are hit while standing on the ground will be buried, allowing you to finish them off with a smash attack. You can cancel roller by pressing an attack button or by jumping.

Additionally, when used in the air and cancelled with a jump, that jump will not be counted as Inkling's midair jump, allowing them to jump once more after using it.

Inkling's up special is their main recovery tool. While there is no active hitbox during the jumping animation, it travels far and very quickly, so the chance of getting gimped is low. Furthermore, the landing part of the move will deal damage and apply ink to enemies, but you are vulnerable for a short time so it's suggested to aim at the ledge when using this move.

Inkling throws a bomb that explodes after a short while. The more you charge the move, the stronger the bomb is, and Inkling throws it in a more horizontal angle. It can be used to kill enemies off stage, or as a low risk edgeguarding tool. A useful setup is to bait a shield by throwing the bomb at an opponent, then rush in for a grab to follow up with an aerial.

At 0 ink, it becomes an ink recharge move where Inkling dives on the ground to refill their ink supply.

Inkling's forward throw knocks enemies forward. It can be comboed into a dash attack or RAR back attack to rack up damage.

Inkling's back throw can kill enemies at high percents when standing at the ledge. Aside from that, use it to throw enemies offstage or gain stage control.

Inkling's up throw can be used as a combo starter. The throw can be followed up by a nair or an up air for a quick damage (up throw into up air is a KO Confirm at later percents).

At low percents, Inkling's Down Throw can be connected with a jab or a forward air. It may not connect against smaller enemies like Pikachu, so other throws are generally a safer option.

How to Unlock Inkling

There are three ways to unlock Inkling. Completing any of these, then defeating Inkling when they appear in the “a New Challenger Appears” screen will allow you to use them afterward. 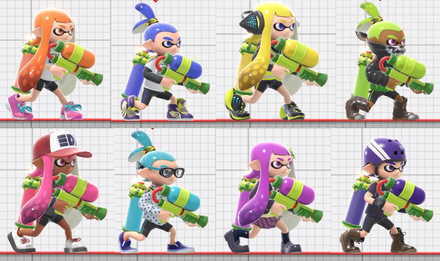 In order for us to make the best articles possible, share your corrections, opinions, and thoughts about 「Inkling Guide: Matchup Chart and Combos | Super Smash Bros Ultimate」 with us!