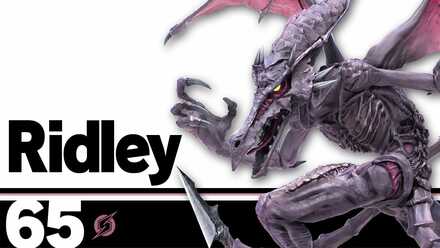 This is a guide to using Ridley in Super Smash Bros. Ultimate. Ridley bread and butter combos, how to unlock, frame data, alt costumes and skins, as well as Ridley matchups, counters, and tier list placement can all be found here.

Smash Ultimate Ridley is one of the largest fighters in the entire game. Ridley can use his tail to space out attacks and deal heavy damage to his foes. He has several powerful moves and good mobility, and he can edgeguard opponents very easily thanks to his neutral B and powerful disjointed aerials.

While Ridley has great advantage, getting a ton of mileage by punishing an opponent's mistakes, his disadvantage is horrible, and his large body makes him a huge target for projectiles. Quick characters with good range and projectiles will give him a hard time, and despite being a large character, his weight is notably lower than other heavyweights, meaning that he doesn't boast the endurance of a typical heayweight. Ridley players need to be careful about how they approach, and focus on punishing opponents for a bad decision.

1. -2 = Disadvantage. -1 = Slight Disadvantage or Even. 0 = Even. +1 = Slight Advantage or Even. +2 = Advantage.
2. The matchup chart was based around both the opinions of professional players of each character, as well as our own experience through playing Ridley.
3. Characters within each tier are unordered
4. Pokemon Trainer's individual Pokemon (Squirtle, Ivysaur, and Charizard) as well as Echo fighters with no significant difference than their regular counterpart are not shown.
5. For other characters who are not shown here, we are still investigating the matchup.

Ridley's slow aerials and frame data gives him somewhat mediocre out of shield options. Neutral air is his fastest option, and has a large hitbox for hitting opponents, but at 11 frames, it is not a very fast punish, so many opponents will be able to avoid it. When possible, going for a grab is an okay option, as it can lead into follow ups at lower percents. For opponents attacking from above, up smash can be used as an anti-air, but only if the opponent is using an unsafe move.

Jab is Ridley's fastest move, making it a useful get-off-me attack on the ground.

Ridley's dash attack has high knockback and deals good damage. It has a good range and speed, making it a good approach tool and viable kill option at high percents by the ledge. It does not cross up shields though, so be careful not to use it on a shielded opponent.

Ridley's forward tilt has good range, damage, and knockback. It can be tilted up to use as an anti-air or down to interfere with grabbing the ledge. It also makes a great spacing tool. The end of the tail has a tipper effect.

Ridley's up tilt comes out fast as he throws his wings into the air. During this, his wings are invulnerable, making it a good anti-air option. However, it has a high hitbox, making it difficult to hit grounded opponents.

Ridley's down tilt comes out quick and has good range. It is just a bit longer than forward tilt, and it throws your opponent up a little bit, allowing for numerous combos such as aerials, forward tilt, and dash attack. Ridley's tail blade has a tipper effect.

Ridley's forward smash is incredibly powerful, but has a very short range, and slow startup. It can KO from ~80%.

Ridley's up smash throws a spinning up kick into the air. It has great range, damage, and knockback. Ridley's foot is invulnerable during the attack, making it great for dealing with aerials from an opponent trying to land. It is Ridley's quickest smash attack.

Ridley's down smash has a wide range on both sides of Ridley, allowing it to catch rolls. Ridley jumps up before slamming down his wings. During this jump, it is possible to dodge your opponents attack. However, this move has very slow start up.

Neutral air is Ridley's safest and fastest aerial move. Its wide hitbox and speed make it Ridley's go-to move for a get-off-me attacks and an out of shield option. It is somewhat safe to use on shield as well when spaced correctly (-8/-7/-9), so it can be used for pressuring an opponent.

Ridley's forward air has good range and damage. Its range can be used to pressure shields, and it can be comboed into from down throw, up tilt, etc. Its multi-hits also make it an ideal tool for edgeguarding off stage.

Ridley's back air deals great damage and has high knockback. As Ridley's strongest aerial, and because it is lower risk than his other moves, it is a great kill option on opponents with high percents.

Ridley's up air can be used to juggle opponents in the air. It has high damage and a wide range, making it useful as a combo extender.

Ridley's down Air has high damage and drops down very quickly. The bottom of Ridley's foot can spike opponents. This move has very high landing lag, making it an unsafe landing option that will get you punished, so use it sparingly.

Ridley's neutral special charges fireballs to shoot out. You can hold down the button to charge for even more fireballs and deal more damage. It does not work well as a ranged option without charging it first, and charging can leave Ridley open to get punished. Furthermore, the longer the move is charged, the greater recoil damage he will take if his mouth is attacked.

The move is mostly used as a safe way to edgeguard opponents off stage. Due to this attack's long moving hitbox and small knockback, it can cut off an opponent's recovery route when off stage, leaving them open to an aerial punish or even completely preventing their recovery.

Ridley's side special is a command grab that drags your oppoenent across the stage. There is significant startup in the beginning of this move, but it can deal a ton of damage. If grabbed on stage, it will drag your opponent to the ledge and deal great knockback damage. However, your opponent can mash out of it. If used in the air, side special can act as a means for recovery for Ridley, or it can grab an opponent and take them down to the blastzone for a suicidal KO. This should only be done when you have a stock advantage, however, as Ridley will be the first one KO'ed.

Ridley's up special charges with his wings in one of four directions. Aside from the up direction, all directions will be at a slight diagonal angle. When using the move to go horizontally, Ridley will not go very far vertically, making him miss the ledge, so it is best to try and recover low. The down direction can spike opponents and also grab the ledge, making it a useful edgeguarding tool.

Ridley's down special stabs his tail out in a deadly attack. This attack takes a long time to come out, but it you manage to land the tipper blow, you can deal up to 55% damage and cause the opponent to temporarily fall on the ground. While it is not guarunteed, down throw can lead into down special on opponents at 0%.

Ridley's forward throw cannot lead into combo likes down throw can, so it will primarily be used for sending your opponent offstage.

Ridley's back throw cannot lead into combo likes down throw can, so it will primarily be used for sending your opponent offstage.

Ridley's up throw since your opponent straight up with a tail stab. It is Ridley's strongest throw. Use it against opponents with poor landing options.

Ridley's down throw can combo into fair, nair, bair, and a run-canceled up tilt at lower percents. This throw is a great and reliable way to rack up damage on your opponent.

How to Unlock Ridley

There are three ways to unlock Ridley. Completing any of these, then defeating Ridley when they appear in the “a New Challenger Appears” screen will allow you to use them afterward. 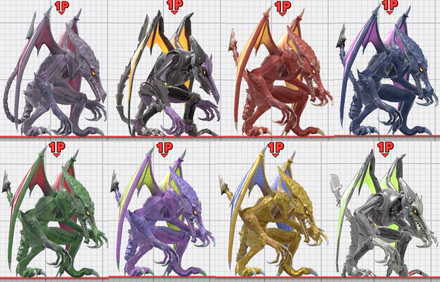 Register as a member and get all the information you want. (It's free!)
Login
Opinions about an article or post go here.
Opinions about an article or post
We at Game8 thank you for your support.
In order for us to make the best articles possible, share your corrections, opinions, and thoughts about "Ridley Guide: Matchup Chart and Combos" with us!
When reporting a problem, please be as specific as possible in providing details such as what conditions the problem occurred under and what kind of effects it had.