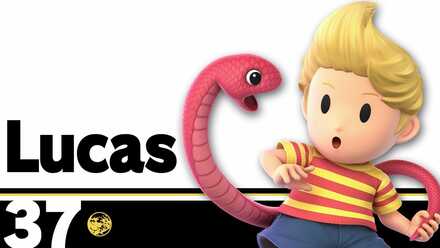 This is a guide to using Lucas in Super Smash Bros. Ultimate. Lucas's bread and butter combos, how to unlock, frame data, alt costumes and skins, as well as Lucas's matchups, counters, and tier list placement can all be found here.

A character good at racking up damage via aerial attacks

Smash Ultimate Lucas has better mobility than in previous games, lag was reduced on his aerials, and his Down Special was made more powerful. His aerials and projectiles allow him to rack up a decent amount of damage on opponents, which he can then finish off by using a smash attack, neutral B, or one of his grabs. Additionally, his specials and aerials grant him pretty good edgeguarding capabilities.

Much like Ness, his recovery is a bit hard to use, as it must be controlled to target Lucas. It is also quite exploitable, so he is quite prone to getting edgeguarded himself. Lucas has rather mediocre ground mobility, and poor out of shield options, so he struggles against characters that can rush him down. He also has pretty bad disadvantage, so he is best played defensively, making use of his kit to zone out opponents at a safe distance when possible.

1. -2 = Disadvantage. -1 = Slight Disadvantage or Even. 0 = Even. +1 = Slight Advantage or Even. +2 = Advantage.
2. The matchup chart was based around both the opinions of professional players of each character, as well as our own experience through playing Lucas.
3. Characters within each tier are unordered
4. Pokemon Trainer's individual Pokemon (Squirtle, Ivysaur, and Charizard) as well as Echo fighters with no significant difference than their regular counterpart are not shown.
5. For other characters who are not shown here, we are still investigating the matchup.

None of Lucas's out of shield options are particularly fast, with his quickest one (neutral air) coming out in 10 frames, making it his best option, although it will not be fast enough to punish most moves that are spaced properly. Due to his subpar out of shield options, he will more often than not simply have to retreat and try to reset neutral, rather than going for an out of shield punish.

Lucas' Jab is a three hit combo that launches on the last hit. Its quick startup makes it a good get-off-me tool to use at close range or after landing. The third hit is very unsafe on shield, so if using it on an opponent, be sure to stop after the first or second hit, the run away and try to punish their out of shield option.

Lucas' Dash Attack releases a wave of PK energy, and has good range and power. Take note that it has a sweet spot at the tip, so aim to hit opponents with proper spacing. It has rather slow startup and end lag, so don't throw it out too often or you will get punished.

Forward Tilt is a quick attack with very little end lag. You can angle this move upwards and downwards, and it hits harder when the opponent is near the tip of the attack as well. This can be used to knock opponents back, and thanks to its quick startup and decent range, it is a good poking tool that can even KO at higher percents.

Up Tilt is a two hit combo that hits on both sides of Lucas, as well as above him inthe second hitbox. This move is one of Lucas's combo starters, as opponents hit with it will be sent above him, allowing for a follow up attack.

Lucas' Down Tilt starts up in just 3 frames, making it his quickest tilt attack (as well as one of the fastest in the game). While it doesn't have much range, it can be comboed into his three-hit Jab. Coupled with its decent range and the fact that it is -6 on shield, down tilt is one of Lucas's main poking tools.

Lucas uses a stick to knock back opponents, and just like Ness's forward smash, it can be used to hit projectiles back at the user, though it must be timed precisely. This move has a quick start up, making it a good move for whiff punishing moves with moderate end lag. The tip of the move has a sweetspot which will deal more damage and knockback, so be sure to space this move when using it to punish.

Lucas's up smash has a long startup and end lag, but it's very powerful and hits an opponent multiple times. Lucas' upper body becomes intangible during the attack, making it a very effective anti-aerial attack. It can KO opponents extremely early.

Lucas' Down Smash is a strong move that can hit below the ledge, making it a powerful move for 2-framing opponents, or KOing an opponent hanging on the ledge after their invulnerability has ended.

With a quick startup, low end lag time, and decent range, Lucas's neutral air move is great for applying pressure at close range, and can lead into several combos. It is also his fastest get-off-me tool in the air, aside from air dodging.

Lucas's forward air has a PK Blast that hits harder at the tip of the move instead of the base, so be sure to space the move as opposed to using it directly on an opponent, as it can KO pretty early if landed. It is a good edgeguarding tool as well with good range. it does have considerable end lag though, so it is best to use the move during a rising jump as opposed to when falling.

When spaced correctly, the move is extremely safe on shield (-3/-2), so most characters cannot punish it with an out of shield option. This makes it another one of Lucas's poking tools.

Lucas's back air attacks in an arc from the top of Lucas than goes downward, and it has a meteor hitbox that you can use to spike enemies offstage. It has a large hitbox and short landing lag, so it's a great move to use for walling an opponent out.

Lucas's down air kicks below him repeatedly, with the last attack having a meteor hitbox. Combined with back air and forward air, it gives Lucas another powerful option for KOing opponents offstage.

Lucas' Neutral Special shoots a controllable ball of ice that freezes opponents, and the farther it goes, the stronger it gets. If you get the highest charge, you can use it to edgeguard near the ledge, which will make it impossble for the opponent to come back.

Lucas' Side Special Technique (PK Fire) is a technique that explodes upon impact with an opponent or a thrown object. For the most part, it is used as a poking tool to zone from a distance, but on higher percentages it can KO as well. Unlike Ness's PK Fire, which will stun an opponent and lead into a follow up, Lucas's variant of the move knocks them away.

PK Thunder releases a controllable ball of Thunder that can either hit opponents or knockback Lucas if he hits himself (which is his main form of recovery). If used to hit Lucas, he will launch in the thunder's direction and damage enemies he comes in contact with, performing up to 12 hits and massive knockback. It can be used as a safe tool to edgeguard opponents offstage.

Lucas summons a magnet sphere that can absorb energy-based projectiles and weak explosions to recover HP, giving Lucas an edge against opponents like Samus or Pikachu. It also slows down Lucas' fall, so it can be used to mix up your landings. When the move ends, it also has a powerful hitbox, capable of knocking opponents away when close by.

Lucas's forward throw hurls an opponent in front of you. It cannot be used for combos, so it is primarily used to toss your opponent off of the stage.

Lucas's back throw hurls an opponent in front of you. It cannot be used for combos, so it is primarily used to toss your opponent off of the stage, but it is capable of KOing opponents at high percents when used near the ledge.

Lucas' up throw launches your opponent in the air, so it best used against opponents with a poor disadvantage.

Lucas' down throw will plant a foe into the ground before sending them upward, making it a combo starter for moves like up air or forward air at lower percents.

How to Unlock Lucas

There are three ways to unlock Lucas. Completing any of these, then defeating Lucas when they appear in the “a New Challenger Appears” screen will allow you to use them afterward. 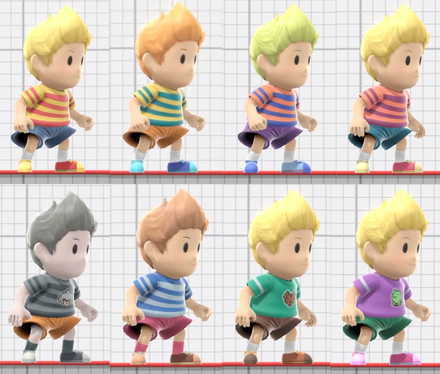 Register as a member and get all the information you want. (It's free!)
Login
Opinions about an article or post go here.
Opinions about an article or post
We at Game8 thank you for your support.
In order for us to make the best articles possible, share your corrections, opinions, and thoughts about "Lucas Guide: Matchup Chart and Combos" with us!
When reporting a problem, please be as specific as possible in providing details such as what conditions the problem occurred under and what kind of effects it had.