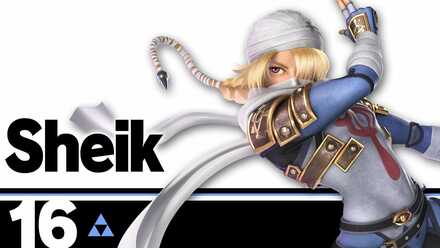 This is a guide to Sheik in the game Super Smash Bros. Ultimate. Everything about Sheik, including how to unlock them, bread and butter combos, frame data, alt costumes and skins, as well as Sheik matchups and counters, can be found here.

Sheik's strengths in Smash Ultimate lie in her ability to move quickly, and easily gain an advantage in neutral. Sheik's excellent frame data and speed allow her to attack her opponents and gain follow ups, and she can use moves such as Down Special, Back Aerial, and Neutral Aerial while offstage to finish off her opponents.

On the other hand, her moves generally deal very little damage, making her feel a bit less rewarding than other characters. She can also struggle to finish out stocks when she cannot land a confirm. She has very few moves that are good for KO'ing while on the stage, so Sheik players will need to devote a lot of time and practice into getting her confirms down.

1. -2 = Disadvantage. -1 = Slight Disadvantage or Even. 0 = Even. +1 = Slight Advantage or Even. +2 = Advantage.
2. The matchup chart was based around both the opinions of professional players of each character, as well as our own experience through playing Sheik.
3. Characters within each tier are unordered
4. Pokemon Trainer's individual Pokemon (Squirtle, Ivysaur, and Charizard) as well as Echo fighters with no significant difference than their regular counterpart are not shown.
5. For other characters who are not shown here, we are still investigating the matchup.

Sheik's amazing frame data gives her access to an array of great out of shield options. The best one depends a little bit on where your opponent is relative to Sheik, but generally speaking, neutral air is her go-to out of shield punish for its quick startup and lingering hitbox. However, if an opponent attacks from behind or above, back air or up smash respectively should cover her better.

Sheik's jab is extremely fast, making this move great for a get-off-me tool on the ground, as well as a good combo finisher.

Sheik's dash attack comes out very quick, making it good for a quick whiff punish. It does not combo into anything or cross up shields, so its main application is as a quick burst option.

With its quick startup, Sheik's forward tilt is used as a combo starter or extender, thanks to its low endlag. At low percents it will combo into most of her aerials, as well as into herself, and and higher percents, it can put opponents into the air for a KO with up air.

Sheik's up tilt hits above her, and is also used as a combo extender, or to hit opponents above her on platforms.

With similar frame data to forward tilt, down tilt is also used at low and mid percents as a combo starter, which can combo into her aerials. It can also be comboed into from a falling nair. Both ftilt and dtilt are essential to Sheik's heavy combo game.

Sheik's forward smash has pretty quick startup, and is one of her moves for KOing an opponent. Using it will send her slightly forward, and if done very close to a shield, can cross it up. It does have noticeable endlag however, so it is not a move that you should whiff, but as a whiff punish or ledgetrapping option, it is useful. It can also be comboed into from a dragdown up air, which is a useful kill confirm.

Sheik's up smash has two hitboxes, with one directly above Sheik in the moves startup, and the other on her sides. It can be used to hit opponents coming from above, or opponents standing on platforms. Additionally, it can be comboed into from a dragdown up air if an opponent is above a platform, for another useful kill confirm. Lastly, it can be used to cover a ledge jump from an opponent, although it is a risky option, so should only be used if you are confident in their ledge option.

Sheik's down smash hits on both sides of her, so it can be used to cover an opponent's roll. A late nair can also combo into it if an opponent misses the tech. Like forward smash, it can be comboed into from up air for a kill confirm.

With its extremely quick 3 frame startup and lingering hitbox, neutral air is a huge part of Sheik's tool kit. It is used both as a combo starter and extender, and can be used as a get-off-me tool in disadvantage. Falling onto an opponent with the late hit of this move will combo into down B or a run up smash attack, both of which are essential kill confirms. Lastly, it is a great out of shield option, covering most unsafe approaches on shield.

At -3/-3 on shield, it is a safe option for shield pressure, and can also be thrown out at the ledge to try and cover get up options.

Sheik's forward air is another essential part to her combo game, and is a combo starter at low percents, as well as a finisher at higher percents. If the opponent DIs in, it can continuously combo into itself, allowing you to carry an opponent offstage. At low percents, you can follow it up with a grab, nair, or a rising fair.

It is -2/-2 on shield, making it very safe for applying shield pressure.

Back air is has higher knockback than nair or fair, so it is good as a combo finisher and KO move. In particular, this is a very useful tool for edgeguarding opponents, which Sheik excels at.

Back air is -4/-4 on shield, and has a lingering hitbox like nair, so it can be used to pressure shields, cover get up options, and start combos (late hitbox).

Up air is used for juggling opponents in disadvantage, KOing opponents at higher percents, and for dragging down opponents to combo with an up smash. Learning drag down combos with this move is essential to Sheik's gameplan.

Sheik's down air has a meteor hitbox on it, and if timed properly, can be used to two-frame opponents at the ledge. It has high startup and endlag, so it is punishable if whiffed, but it is occasionally useful as a mixup to KO opponents on stage. Using it offstage can spike opponents, but will likely lead to Sheik SD'ing, so it should only be used if you are confident the meteor hitbox will connect, and you are aiming for a stylish ending. It has some applications with combos on stage as well, but it is more situational than her other aerials.

Sheik's neutral special allows her to charge up to six needles, which she can throw out as a projectile any time she wants. Needles are mostly used for poking at opponents from a distance, although they can also combo into bouncing fish (down B) if hitting an opponent offstage, or after jumping in the air, making them useful for both zoning opponents or comboing.

Sheik's side special is a wired grenade that will explode after a short time. It pulls opponents in for the explosion if they are nearby, and it is mostly used for edgeguarding opponents with predictable recoveries.

Sheik's up special is mostly used to recover, as she will temporarily disappear and then reappear in the direction the stick is held. Although there are no combos into it, the initial explosion is very powerful, so if used near and opponent, it can often KO them.

Sheik's down B is very important to her gameplan, as it is used both as a combo finisher, and for recovering. Holding the stick left or right will influence how far it goes, and pressing B will allow her to use the kick more quickly. Many of Sheik's KO confirms end with this move, so it is important to learn what moves combo into it (forward throw, Nair, needles, etc). Lastly, it is great for edgeguarding opponents.

Using it offstage allows her to mix up her recovery by using it before or after her double jump, and ending with her up b. This prevents Sheik from getting edgeguarded easily, and lets her survive into higher percentages despite her light weight.

Forward throw is Sheik's go-to throw at low percents, as it can combo into bouncing fish (down B) for big damage (this is influenced by opponent's DI). It is also good for gaining stage control, or sending an opponent offstage to set up an edgeguard.

Back throw is really only used for gaining stage control or putting an opponent offstage. Other than that, forward or down throw are usually better options.

Up throw puts opponents high in the air, but doesn't lead to any combos, and cannot KO, so in most cases, a different throw is a better option.

Sheik's down throw puts opponents into the air, and can combo into fair or up air, making it a good option at mid-percents, when bouncing fish doesn't seem like it will connect.

How to Unlock Sheik

There are three ways to unlock Sheik. Completing any of these, then defeating Sheik when they appear in the “a New Challenger Appears” screen will allow you to use them afterward. 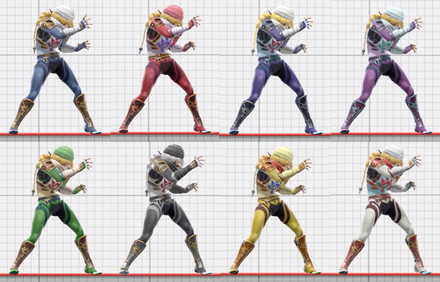 In order for us to make the best articles possible, share your corrections, opinions, and thoughts about 「Sheik Guide: Matchup Chart and Combos | Super Smash Bros Ultimate」 with us!