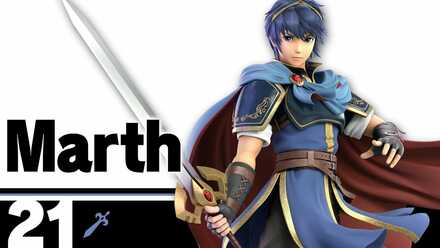 This is a guide to using Marth in Super Smash Bros. Ultimate. Marth's bread and butter combos, how to unlock, frame data, alt costumes and skins, as well as Marth's matchups, counters, and tier list placement can all be found here.

A swordie who gets rewarded for proper spacing

With Marth's superior range, his Neutral Aerial, Forward Aerial, and Down Tilt all allow him to safely deal damage to his opponents from a distance. Marth also has a special property where landing attacks with the tip of his sword will cause the attack to deal additional damage and knockback. Properly spacing the tipper on attacks such as forward smash and back aerial will allow him to take stocks rather quickly.

Conversely, failing to land the sweetspot of his sword will make it difficult to take stocks, so unlike Lucina (whose sword does the same damage and knockback regardless of where it hits), Marth is a better character for more advanced characters who are able to properly control their spacing on each attack.

1. -2 = Disadvantage. -1 = Slight Disadvantage or Even. 0 = Even. +1 = Slight Advantage or Even. +2 = Advantage.
2. The matchup chart was based around both the opinions of professional players of each character, as well as our own experience through playing Marth.
3. Characters within each tier are unordered
4. Pokemon Trainer's individual Pokemon (Squirtle, Ivysaur, and Charizard) as well as Echo fighters with no significant difference than their regular counterpart are not shown.
5. For other characters who are not shown here, we are still investigating the matchup.

How to Beat Marth

Keep him in disadvantage

Marth has rather poor air mobility, and the only attack he can use to cover himself when coming down is herhisdown air, so it's not too difficult to juggle him. Marth players will want to avoid a risk, so they tend to choose fast falling + an air dodge, or escaping toward the ledge, so watch how they attempt to get out of disadvantage and follow up there.

Attack safely out of his reach

With his extremely fast up special and long ranged nair attacks, Marth has great out of shield options. However, since Marth doesn't have any projectiles or a reflector, it's possible to pressure him from outside of his spacing to force him to do something, and then read his movements. However, since Marth is quick and has excellent range, you'll need to be wary of your own spacing when using projectiles.

This combo can be used on opponents with lower percents. If you can get down the timing of the jump, this is a quick and easy combo.

This combo can be used on opponents with lower percents. Use this combo when your opponent is close to you to rack up around 25% damage.

This combo can be used on opponents with lower percents. Use the forward air while falling after your jump. Inputting the down input for the side special will accumulate the most damage.

This combo can be used on opponents with lower percents. Use the up air attack just before landing on the ground.

This combo can be used on opponents at various percents. Look to KO your opponent with this combo at high percents.

At only 5 frames of startup, Marth's Up B is an amazing out of shield option, allowing him to punish a wide variety of attacks that hit his shield. Beware that whiffing it will leave Marth helpless, making it easy for an opponent to punish, so be careful not to be too trigger happy with it, and use it when you are sure the move that hit his shield was unsafe. Other than Up B, both nair and fair can be used oos too, as well as shield grab, though at 10 frames, it is not the quickest punish.

Marth's jab is pretty quick, with just 5 frames of startup, making it pretty good to use right after landing. If you land it, it will also allow you to regain some distance away from your opponent.

Marth's dash attack has good reach and damage, but it is one of his slowest attacks, and has a ton of endlag. It is essentially outclassed in every way by using a sliding forward tilt, so you should rarely use DA, if at all.

This move also has excellent reach and damage. It is an excellent tool for spacing out opponents, and if you can pull off a sliding tilt, it essentially replaces his dash attack.

A very quick move with good range. This attack covers the space above Marth, all the way to his back, making it useful against opponents who are jumping, landing, or even rolling.

This move has excellent range, and thanks to its extremely low end lag, it is safe on shield and a great poking tool. However, the move only has a horizontal hitbox, so it is difficult to use against opponents who are jumping.

This smash attack also has a great launch distance. The strong hitbox only hits opponents directly above Marth, but there is another hitbox that will hit grounded opponents next to Marth, making it a good out of shield option as well.

Marth's down smash has very little startup, making it his quickest smash attack. It doesn't launch opponents as far as his other smash attacks do, but it hits in front of and behind Marth, making it good for covering opponents trying to land an attack on either side. It can also be used to hit opponents hanging on the ledge after their invulnerability has run up.

This move has very quick startup, making it a good OoS option. It also has excellent range, so it is very good for spacing out opponents. If the first hit is combined with a fast fall, it can be used as a combo starter as well, leading into fmash at higher percents, which is a kill confirm.

Lke Nair, forward air also has great range and quick startup. It's mostly used as a poking tool, as it is very safe on shield, but it is also excellent for edge guarding.

Another fast move with a large hitbox, bair is also excellent for closing out stocks. Like fair, it can be used for edge guarding, but you should not that Marth's body will face the complete opposite direciton after using it, so be careful of a misinput when recovering back to the stage (you'll need to use a turnaroun special in order to snap to the ledge).

This move has great range, with the hitbox covering the entire area above Marth, so it is great for juggling opponents or snuffing out an attempt to use an aerial. If used right when landing, it can be followed up with another aerial attack.

Marth's dair has a meteor hitbox, allowing him to spike opponents. This hitbox is only the one directly beneath the attack, but if you can land it, it will allow you to take many stocks quickly against characters with poor recoveries.

Marth's Neutral Special allows him to charge up his sword and stab in front of him. The longer it is held and charged for, the more damage and knockback it has. It can also do a ton of shield damage, and if fully charge, will break shields. Even if uncharged, it is very effective on shields, so it is a good attack to use on opponents who are very defensive.

Another special property of this attack lies in the fact that striking an opponent's head directly will allow him to do 1.15x damage. The attack can also be angled up or down, so aim for the head when possible.

When used in the air, it gives Marth a boost forward in the direction it was used, which is amplified when charged. This means that it can be used as a recovery option after being launched offstage by an opponent. If you are below the stage, it may be harder to use it for recovery, since you may fall below the blast line, but if launched high, use it to move closer to the stage.

Marth's side special can be extended by inputing B multiple times, for a total of 4 attacks. The attacks will change when holding up or down during the input of the 2nd attack onward. Holding up launches opponents upward, no input launches them forward, while holding down allows him to deal more damage.

Using the side special in the air will also allow Marth to cease moving momentarily, allowing you to mix up your recovery.

With its extremely fast startup, this is one of the best out of shield options in the entire game. The invulnerability lasts longer when used in the air, as opposed to on the ground. This invulnerability can be used to break out of an opponent's combo, attack a move whiffed on shield, as well as recover, making it quite versatile. It can even take stocks when used out of shield on an opponent at higher percents, so make sure you are comfortable with using up B out of shield.

Marth's down special is a typical counter. The strength of the attack depends on how strong the opponent's attack was, and it works even on attacks that hit Marth from behind. It is mostly used when reading an opponent's attack, but it can also be used to edgeguard characters who have a hitbox and no invulnerability on their recovery.

Marth's forward throw has decent launch distance, and can be used to set up an edgeguard, but it doesn't combo or confirm into anything.

Has more knockback than his forward throw. Like forward throw, it doesn't have any confirms, but it can be used to gain stage control or set up an edgeguard.

Marth's up throw sends opponents very high upward, and can even KO at high percentages (around 200%). It is primarily used to put opponents into disadvantage so you can juggle them with up airs.

Sends the opponent up and behind Marth. This can set up for a combo into back air at lower percentages.

How to Unlock Marth

There are three ways to unlock Marth. Completing any of these, then defeating Marth when they appear in the “a New Challenger Appears” screen will allow you to use them afterward. 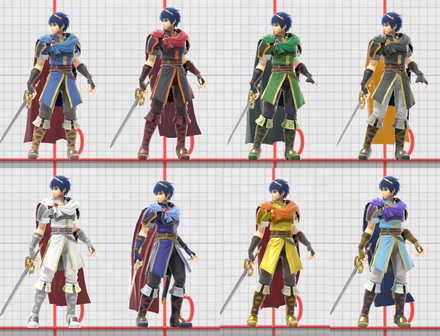 Register as a member and get all the information you want. (It's free!)
Login
Opinions about an article or post go here.
Opinions about an article or post
We at Game8 thank you for your support.
In order for us to make the best articles possible, share your corrections, opinions, and thoughts about "Marth Guide: Matchup Chart and Combos" with us!
When reporting a problem, please be as specific as possible in providing details such as what conditions the problem occurred under and what kind of effects it had.