Weiss Boss Guide and How to Unlock | FF7 Remake Intergrade

This is a guide to beating the Boss Weiss in the game Final Fantasy 7 Remake (FF7R). This article explains Weiss's attack patterns, weaknesses, and tips and strategies for defeating them.

How to Unlock Weiss

To unlock the fight with Weiss in the Combat Simulator, you must first finish the main story as well as both chapters of the Yuffie episode, INTERmission. With that done, you can head into Chapter 17 on Hard mode to start up the fight!

A depraved and ruthless Deepground SOLDIER recreated in a virtual space. Known as Weiss the Immaculate, he reigns supreme over Deepground.

No Enemy Skills can be learned from Weiss.

Defeating Weiss will earn you 2 Gotterdammerung.

Change Strategies Based on His Weapon 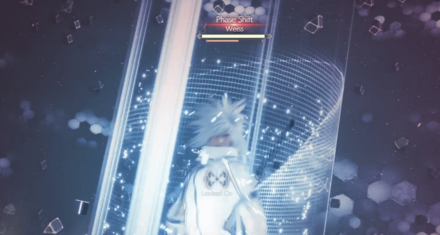 After a while, Weiss will use Phase Shift and change up his weapons, skills, and resistances. The most dangerous of these is his Double Sabre Phase, as if his attacks connect they will heal him. Try to avoid every attack and strike back with Limit Breaks to quickly stagger him and take him down.

Go on the Assault

After a period of time, Weiss will use his ultimate move, Immaculate End, which deals 9999 damage to all party members and can cause an instant wipe. It's possible to survive this by making use of the Reprieve weapon skill or the Revival Earrings/Superstar Belt, but after 2-3 hits from this attack, you won't have any option left but to try again. On top of this, when in his Double Sabre phase, Weiss' attacks will heal him if they hit you, so you'll want to finish the fight as quickly as possible.

One way of doing this is by staggering him during his Gun phase. Equip weapons with both high physical and magic stats and him hard with your strongest magic.

Gotterdammerung's Efficiency Cut in Half

During this fight you will also notice that the effects of the Gotterdammerung have been slightly nerfed, as the speed at which the Limit Break gauge fills in battle is cut in half.

Despite the nerfed effect, Limit Breaks are integral to staggering Weiss and taking him down, so be sure to have one equipped when heading in.

Use Cloud and Aerith as Mages

Magic is going to be highly effective against Weiss. A well-timed spell when he is pressured will deal decent damage and increase the stagger gauge. The Ga level spells will be the most effective against him, although it can be hard to hit Blizzaga. Time it as he is pressured and let Tifa get some hits in to ensure Blizzaga hits. When he is staggered, use Thundaga for heavy damage that is sure to hit! Magic is also the only way to damage him when he is in his gun mode.

Weiss will only focus on the character you are controlling. It's recommended to use Tifa during Weiss' dual sword mode, as she has the best mobility to dodge his attacks. By using Tifa's Focused Strike ability which only costs one ATB gauge, you can both dodge Weiss' attacks and strike him when he's pressured. Be sure to buff Tifa with spells like Barrier to ensure she survives Weiss' stronger attacks.

Physical attacks are most effective during this phase

If you dodge right as Weiss reaches in for his swords and swings outwards you will put him into the Pressured state and give yourself an opening to attack. For this attack it's best to dodge backward .

During this phase, you'll want to primarily control Cloud and use Focused Thrust while Weiss is Pressured to quickly stagger him. You can spend most of the fight baiting out his attacks because he'll just counter if you try to hit first.

Weiss will rush at you from afar and finish with a cleaving attack to the left or right. If you dodge right before the attack connects you can put him into the Pressured state.

A simple dashing pierce attack. For this one you'll want to dodge towards Weiss before the attack hits in order to Pressure him as seen in the animation above.

If you get hit by Evisceration, Crosswise Cleave, or Stab, Weiss will follow up with another attack and deal heavy damage. If you happen to get struck by any of these get your healing magic ready to keep the fight from ending early. 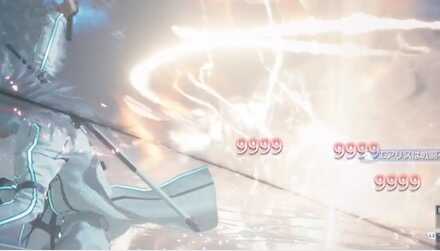 After a certain period of time, Weiss will switch from one of his other phases back to Dual Katanas and start his ultimate attack. All party members will take 9999 damage so you'll want to have the weapon skill Reprieve or the Revival Earrings/Superstar Belt accessories equipped to survive.

Unfortunately for you, Weiss will eventually use Immaculate End again. You'll only be able to survive this 1-2 times depending on your setup so focus on taking him out quickly.

Magic attacks are most effective during this phase

Weiss will charge you down and hit you twice with his gun. If you have the Steadfast Block Materia equipped this will fill up your ATB gauge quite a bit.

Weiss will shoot a laser beam that zigzags across the arena. If you're too close you'll need to guard, but you can outrun it for no damage as well.

Rejuvenation will cause Weiss's stagger gauge to decrease over time. You'll want to attempt to at least maintain Weiss' stagger gauge to the best of your ability by using -ga level magic so you can stagger him when he switches to another phase.

As the battle goes on this skill is tied to Weiss' use of Immaculate End. If you're worried about MP, wait until the stagger gauge empties and fire off your strongest magic.

Another unblockable attack. It can be difficult to dodge if you're too close, but due to its fairly low damage, while a party member is bound you can use it as an opening to attack.

Weiss will fire off shots that create puddles on the ground. If you touch either the shots or the puddle you will be inflicted with Silence and Slow, causing you to be unable to deal damage to Weiss during Gun phase. With that in mind, try to keep your distance during this attack. 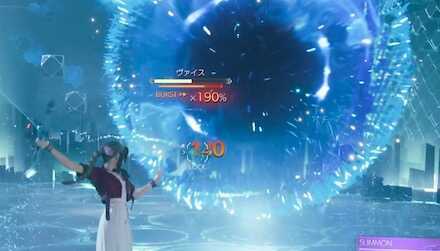 A black hole that follows your party members and attempts to suck them in will appear. You will take 200 damage every 0.5 seconds as long as you're near it. Once it's summoned keep your distance to avoid damage.

If it happens to get too close while you're attacking Weiss, though, stay aggressive. Tanking the damage is worth the tradeoff.

Physical attacks are most effective during this phase

Weiss will warp to the player while swinging his sword and slam it down into you. This will heal him if it hits.

Weiss dashes at you from afar and slashes. If he hits he will follow up with another attack. This will also heal him if you get hit.

This phase is especially tough due to difficulty dodging and finding openings. The best way to handle this is to use Cloud, Tifa, or Barret's Limit Breaks to quickly stagger him.

After a spinning attack swirling flames will expand towards the outside of the arena. This is also an opening for you to use Cloud or Tifa to go to town on Weiss while he's vulnerable.

In order for us to make the best articles possible, share your corrections, opinions, and thoughts about 「Weiss Boss Guide and How to Unlock | FF7 Remake Intergrade」 with us!