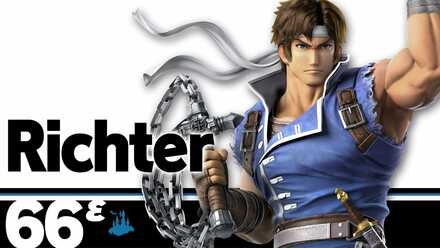 This is a guide to using Richter in Super Smash Bros. Ultimate. Richter's bread and butter combos, how to unlock, frame data, alt costumes and skins, as well as Richter's matchups, counters, and tier list placement can all be found here.

A powerful zoner with an arsenal of projectiles

Just like his non-echo counterpart (Simon), Smash Ultimate Richter is a zoner with long range on his attacks, as well as 3 different projectiles, which he can use to wall out his opponents. Using the projectiles to limit an opponent's approach lets Richter punish or KO opponents with a smash attack or one of his aerials. Since his mobility is on the low side, he can make use of his down tilt to slide away from opponents who get in too close, and continue to attack from a safe distance.

As mentioned above, Richter has poor mobility, and additionally, one of the worst recoveries in the game. Although he can use an aerial as a tether recovery, he still struggles a lot offstage, so the best bet is to try and prevent letting that happen. He also struggles in close combat, having poor frame data, so if opponents are able to break his zoning and get in up close, he will have a hard time fighting back.

1. -2 = Disadvantage. -1 = Slight Disadvantage or Even. 0 = Even. +1 = Slight Advantage or Even. +2 = Advantage.
2. The matchup chart was based around both the opinions of professional players of each character, as well as our own experience through playing Richter.
3. Characters within each tier are unordered
4. Pokemon Trainer's individual Pokemon (Squirtle, Ivysaur, and Charizard) as well as Echo fighters with no significant difference than their regular counterpart are not shown.
5. For other characters who are not shown here, we are still investigating the matchup.

Richter has rather poor out of shield options. His only quick option is his up special, which comes out in 6 frames, but only hits an opponent very close, and will leave him very vulnerable if whiffed. After that, his next best option is neutral aerial, which takes 11 frames for the move to start up. In many cases, Richter will not have a great answer to shield pressure, other than rolling away and trying to reset neutral.

Richter's Jab has two hits, followed by a flurry and then a final uppercut that launches your opponent. This is Richter's quickest attack, which makes it very useful as a get-off-me tool at close range, where he struggles the most.

By holding A and using the move stick, Richter can dangle his whip and move it around. It has a stronger hitbox at the ball than the chain. This move can be used to block weak projectiles.

Dash attack has Richter dashing forward and spinning the whip around him, causing a circular hitbox to appear around his body. This dash attack is active for a long time, and can even block weak projectiles. Generally, down tilt is better as an approach / escape tool, so dash attack is used to approach and break through projectiles.

Richter swings his whip forward, putting out a large horizontal hitbox in the direction he attacks. This move cannot be shifted up or down, so it is mostly used as a spaced poking tool. The move's tipper hitbox is stronger than the base, so correct spacing is particularly important.

In his Up Tilt attack, Richter whips upwards, with his whip swinging from side to side, which is good for intercepting opponents midair or those at a 45 degree angle. While it is great as an anti-air attack, the only grounded opponents it can hit are large characters like King K. Rool and Ganondorf.

Down Tilt has Richter do a slide, and performing it right after will allow him to launch himself in an arc in the direction he just attacked. This move's quick startup and movement is good for retreating quickly, as Richter is not very good in close range.

Richter's Forward Smash is similar to his Forward Tilt Attack, however it can be charged, and can be angled diagonally up or down. It has good knockback, and is stronger if hit closer to the tip, so be sure to space it properly. Its long startup and endlad may also get you punished if you use it while too close to an opponent.

Richter's Up Smash has him whipping directly upwards in a straight line, allowing him to juggle falling enemies or anti-air jumping ones, but the move has a very narrow horizontal window. Take note that like with Forward Smash, the move is stronger at the tip of the whip, and landing a tipper hit can sometimes lead to early KOs.

Richter's Down Smash allows him to whip on both sides of himself, which is good for hitting his left and right sides at a range. As with the other smash attacks, hitting at the tip causes more damage and knockback.

Richter's neutral air swings his whip in a circular motion around him, similar to his dash attack. His hitbox is a circle surrounding him, making a decent get-off-me tool in the air when forced into close range combat. It is also one of his combo starters, and can combo into istelf, as well as a variety of other moves.

Richter's forward air extends his whip forward, which can be angled either diagonally up or down, and deals more damage at the tip. This move has great range and can also be used to tether onto the ledge when midair, which is essential for recovery, given that Richter's up special has such poor vertical distance. While it has rather slow startup, it is pretty powerful in terms of knockback and damage, and can KO at higher percents.

Richter's back air extends his whip behind him, in a similar fashion as forward air. The move is nearly identical to forward air in all regards, and like forward air, can also be used to tether onto the ledge.

Richter whips directly upwards, like his up smash, in a straight vertical line. Like back air, it is similar to forward air in all regards, except that it cannot be angled, so it will always attack straight up. It can be used to tether to the stage from below, so it is important to learn the best situations for using up air or up special for recovery.

Richter kicks downward to whatever direction he's facing. While it doesn't have good horizontal range, it's useful for starting combos. If it hits an opponent, Richter will bounce off them, which can allow him to follow up with another attack.

While it does have a meteor hitbox and can spike opponents, it is very risky to use offstage, as Richter commits to the attack all the way down, so a miss could result in an SD. Therefore, using Richter's wide array of projectiles to ledgetrap is a much safer option than going offstage with a down air.

Richter throws his axe upward in an arc, and while it has a slow startup and can a bit difficult to hit due to the angle, it deals high damage. Due to its arc, it makes a great anti-air if you get the timing right, so it can be used when you predict an opponent will jump in after throwing out the cross. Additionally, it is a very powerful edgeguarding and ledgetrapping tool, so make use of it for opponents you've knocked off stage.

Richter's Side Special throws out a giant cross that goes through a medium horizontal distance before returning, with both of them having an active hitbox. While its out, Richter can still move around or do other moves. It is one of Richter's main tools for stage control, as an opponent has to react to the move via jumping, shielding, dashing away, etc, all of which Richter can answer with another move or action.

It will deal more damage and travel further if you smash the control stick while inputting the move, similar to Link's boomerang. Hitting the special button after already holding forward will give you the regular variant.

Richter uppercuts upward in his up special. Its quick startup and decent knockback make it a good out of shield option and close range move for getting an opponent away from you, especially because it grants Richter momentary intangibility.

It is also Richter's main recovery move, although it is very poor as a recovery tool, due to the short vertical distance Richter travels when using it.

Richter's down special is Holy Water, a projectile that explodes on impact and causes multiple hits when landed. It's another one of Richter's many powerful zoning options, and catching an opponent in it will allow for a follow up with a forward smash. It's also a very powerful ledge trapping tool, as it forces opponents to either wait it out or manuver around it. Hitting an opponent's neutral getup at the ledge with it and then hitting the stunned opponent with a tipper forward smash can lead to very early KOs.

If the holy water is caught when thrown before hitting the ground, the holder can throw it can use it as an item.

The one minor difference in Simon and Richter lies in this move. While Simon's down special deals flame damage, Richter's deals aura damage (similar to Lucario's specials). While this will generally not have any large effect, Olimar's Red Pikmin are immune to flame damage, while they are not immune to aura damage.

Richter throws his opponent forward, which is good for putting distance between him and the opponent to get back to his zoning game. At higher percents, it can KO when used near the ledge.

Just like forward throw, Richter's back throw just tosses your opponent away and allows you to continue zoning. It is weaker than forward throw, although it is also capable of KOing at high percents near the ledge.

Up Throw is a good move to put your opponents into disadvantage and go for a juggle. At around 40%, it can combo into an up air.

Down Throw can be used to combo into forward air at certain percentages. At 0%, it can also be combo into a forward smash.

How to Unlock Richter

There are three ways to unlock Richter. Completing any of these, then defeating Richter when they appear in the “a New Challenger Appears” screen will allow you to use them afterward. 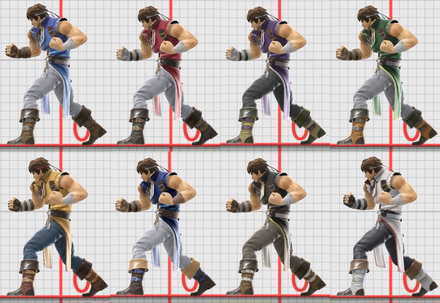 Register as a member and get all the information you want. (It's free!)
Login
Opinions about an article or post go here.
Opinions about an article or post
We at Game8 thank you for your support.
In order for us to make the best articles possible, share your corrections, opinions, and thoughts about "Richter Guide: Matchup Chart and Combos" with us!
When reporting a problem, please be as specific as possible in providing details such as what conditions the problem occurred under and what kind of effects it had.