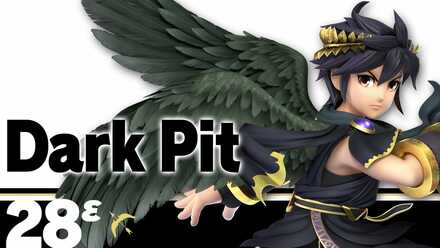 This is a guide to Dark Pit in the game Super Smash Bros. Ultimate. Everything about Dark Pit, including how to unlock them, bread and butter combos, frame data, alt costumes and skins, as well as Dark Pit matchups and counters, can be found here.

An all-arounder with several useful tools

Like his non-echo fighter counterpart, Dark Pit is an all-arounder, with access to a good projectile in his Neutral Special (B), a reflector / shield in his Down Special (↓ + B), and several moves with good range (Dash Attack, Forward Tilt, Neutral Aerial, etc). This makes Dark Pit a rather easy character for almost anyone to pick up and play.

Dark Pit's main weakness lies in the fact that he doesn't have many moves that will take stocks early, which can make it difficult for him to KO. If you can get the hang of edgeguarding with him, through use of moves such as Nair and arrows (B), this problem can be somewhat remedied.

1. -2 = Disadvantage. -1 = Slight Disadvantage or Even. 0 = Even. +1 = Slight Advantage or Even. +2 = Advantage.
2. The matchup chart was based around both the opinions of professional players of each character, as well as our own experience through playing Dark Pit.
3. Characters within each tier are unordered
4. Pokemon Trainer's individual Pokemon (Squirtle, Ivysaur, and Charizard) as well as Echo fighters with no significant difference than their regular counterpart are not shown.
5. For other characters who are not shown here, we are still investigating the matchup.

Dark Pit has a couple of quick and useful out of shield options, making him pretty good at punish moves that hit his shield. Up smash is his fastest option, coming out in only 6 frames, and hitting the area above him, making it good as an anti-air. In most cases neutral air is your go-to out of shield punish option, since it is fast, and has a long lasting disjoint that can lead into combos.

Dark Pit's jab comes out fast, so it can be used as a get-off-me attack for persistent opponents. Since there is a 3 hit and rapid jab variant, you can hit an opponent's shield once or twice with the jab, before dashing away and coming back in as a mixup.

Dark Pit's dash attack comes out fast and should be used at mid ranged distances to catch landings or whiff punish.

Dark Pit's forward tilt has great range, but noticeable end lag, so only use it against opponents who have shorter Dark Pit can outrange.

Dark Pit's up tilt comes out fast, but it has short range, which makes it difficult to land. Generally, you should use up smash instead of this attack.

Down tilt is a fast attack with few cooldown frames. Due to Dark Pit crouching during the attack and its short endlag, it can be hard to counter for your opponent, especially if followed with a buffered spotdodge, making it a good tool for poking.

Dark Pit's forward smash has high knockback power. It can send your opponent very far, so even if they do manage to survive, you can go for an edgeguard to prevent their recovery.

Up smash comes out extremely quickly. It is a fast attack despite it being a smash attack, and can be used to catch an opponent's air dodges and as an anti-aerial. Its fast startup makes it a great out of shield option.

Dark Pit's down smash also comes out fast. While the the first attack to the front comes out fast, its knockback power is mediocre and it sends opponents diagonally away, making it difficult to KO with. The second attack behind comes out later, but is more powerful, and can setup for an edgeguard.

Dark Pit's neutral air comes out fast and can cover all around him, making it useful as a get-off-me attack. It also has a lingering hitbox, allowing you to use it to prevent recoveries. However, it has a short range, so it is easy for your opponent's attack to out-range nair.

Dark Pit's forward air has better range than nair, so use it in the air to keep your opponent in check. However, it has little knockback, and is a weaker aerial attack. It must be spaced properly or else an opponent will be able to punish it out of shield.

Bair has great range and knockback power. It is also one of Dark Pit's few KO moves, so you can use this move when looking to KO. Bair is -8 on shield, making it a good attack to pressure shields with proper spacing.

Dark Pit's up air has a very long active hitbox, which hits on both left and right sides, making it easy to catch your opponents. It can beused as a follow-up aerial attack in combos, or to juggle opponents in disadvantage.

Dark Pit's down air can meteor smash opponents if the very bottom of the move connects with an opponent, so when your opponent is recovering, bait them with an arrow and go for a spike.

Dark Pit's neutral special fires a fast purple arrow. Also, by using the control stick left or right, you can aim which direction that Dark Pit will fire it in. After firing, you can continue to use the control stick to change the trajectory of the arrow, to make it go up or down slightly.

The largest difference in Dark Pit and Pit is in this move. Dark Pit's arrow deals more damage and knockback, but it is harder to change the direction of, making it harder to use for edgeguarding, while Pit's is easier to control, and thus easier to hit opponents off stage with.

Dark Pit's side special will dash towards the opponent. During the dash, Dark Pit has super armor, and can reflect projectiles. However, this move has a lot of endlag, and can be punished with a counter attack if shielded. If used in the air, the knockback is weakened, but it will have less endlag.

Dark Pit's side special deals more damage than Pit's does, and sends opponents horizontally rather than vertically, making it better for KOing close to the edge of the stage.

Up Special (Power of Flight)

Dark Pit's up special allows him to fly upward towards the direction input. This is one of the highest recoveries in the game, but you cannot attack while flying.

Down special will put up a shield on both sides of Dark Pit that can block attacks and reflect projectiles. However, the areas above and below Dark Pit are not guarded, and are open to an attack. If he gets damaged while the move is active, the shield will break, at which point it will be unusable for around 10 seconds.

Dark Pit's back throw will send his opponent flying behind him. Once again, a dash attack can be connected, but only at lower percents.

Up throw will send you opponent straight up into the air. It doesn't combo, but it will open up a chance to follow up with an aerial attack.

Down throw will send the enemy up slightly. After throwing, use nair, fair, or up air to land a combo. Typically, down throw is the go-to throw when looking to rack up damage.

How to Unlock Dark Pit

There are three ways to unlock Dark Pit. Completing any of these, then defeating Dark Pit when they appear in the “a New Challenger Appears” screen will allow you to use them afterward. 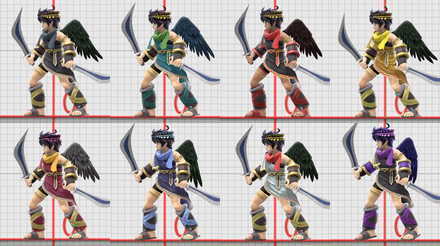 Register as a member and get all the information you want. (It's free!)
Login
Opinions about an article or post go here.
Opinions about an article or post
We at Game8 thank you for your support.
In order for us to make the best articles possible, share your corrections, opinions, and thoughts about "Dark Pit Guide: Matchup Chart and Combos" with us!
When reporting a problem, please be as specific as possible in providing details such as what conditions the problem occurred under and what kind of effects it had.