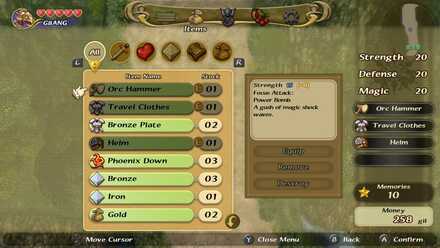 This is a guide about all the stats in Final Fantasy Crystal Chronicles: Remastered Edition (FFCC). Here, we explain all the stats (Mainly Strength, Defense, Magic) and their effects in the game. 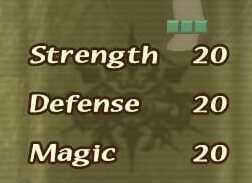 Like all RPGs, Final Fantasy Crsystal Chronicles has a stat system that determines the numbers you can deal/take in the game. This is lightly explained in the game so we will further discuss each stat in this guide.

The most simple stat of them all. HP is a stat that gets reduced when you take a hit from an enemy attack/spell. Your character's HP is represented by hearts and you can lose a minimum of half a heart when taking a hit depending on your defense stat (more on this below.)

Strength determines the damage of you or your enemy's attacks. Strength also affects the damage of Focus attacks so make sure to build up your strength stat if you're playing attack based races.

What Does the Magic Stat Do?

Defense reduces the damage of physical attacks and magical attacks. As opposed to other RPGs, FFCC doesn't have a stat for magic resist and both damage types can be reduced by defense. If you're healing yourself more often than you're hitting the enemy, build up your defense stat!

What Does The Defense Stat Do?

Register as a member and get all the information you want. (It's free!)
Login
Opinions about an article or post go here.
Opinions about an article or post
We at Game8 thank you for your support.
In order for us to make the best articles possible, share your corrections, opinions, and thoughts about "Stat Explanation | Strength, Defense, and Magic Stat" with us!
When reporting a problem, please be as specific as possible in providing details such as what conditions the problem occurred under and what kind of effects it had.