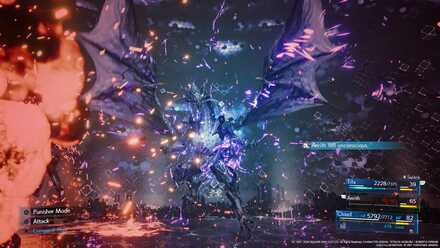 This is a guide to beating the Shinra Combat Simulator challenge Three-Person Team vs. Top Secrets in the game Final Fantasy 7 Remake. This article explains what enemies you will face, recommended equipment and materia, and tips and strategies for defeating them.

It's possible to use any set of 3 characters in this battle, but we recommend using Cloud, Tifa and Aerith.

Use Cloud When Trying to Stagger

Cloud's Focused thrust is effective for staggering the enemy and his Counterstance is good at dealing damage while blocking damage. With his all roundedness you will be using him most of the fight.

Switch to Tifa when Enemy is Staggered

While Tifa has amazing damage potential when the enemy is staggered. She can make the fights much shorter if her abilities are maximized while attacking a staggered enemy.

Aerith as Healer and Offensive Caster

Aerith will be the main healer and should prioritize healing as much as she can. And when healing is not necessary she should be casting spells or using her abilities to help the party.

If you have Elemental Lv.2 linked with Ice in the armor slot, the character equipped will be immune to Ice magic. This will allow them to get up close and personal with Shiva without having to worry about getting hurt.

Go on the Offensive to Pressure

Doing a certain amount of damage will put the Fat Chocobo into the pressured state, making it easier to stagger it. So throw out your damaging moves when you can save some ATB for your stagger increasing moves.

Get Rid of the Summons ASAP

During the fight, the moogles that accompany Fat Chocobo will be summoning monsters. You will want to get rid of them as soon as you can. Triple Slash is very useful to do that while still doing damage to the Fat Chocobo.
How to Beat Fat Chocobo

Guard When You See an Ability

Any time Leviathan starts charging an ability it takes a bit of time, so watch out for the names that pop up over its head and get ready to guard. Taking a hit from any of Leviathan's attacks can send you to the danger zone so keep your eyes open!

Just like in the VR Mission on Normal Mode, Leviathan will target far away characters with Briny Bellow, its beam attack. Take advantage of this by switching to Aerith and standing far away to bait out Briny Bellow, then quickly swap back to Cloud and go to town.

Heal Up or Cast Manaward When It is Casting Tidal Wave

Leviathan still has a devistating attack called Tidal Wave. In Hard Mode this attack will deal even more damage than it did before, so you still want to make sure your whole party survives it. Healing up and making sure everyone has their health as close to max as possible and having Manaward buffs on your party will help greatly. If its stagger meter is close to full, it is better to just go for the stagger and cancel the move.
How to Beat Leviathan

Counterstance is a useful ability against Bahamut. With its constant aggression, you will have multiple opportunnities to take advantage and do some damage countering.

Go All Out on Offensive When Bahamut is Counting Down

Even if your party survives the Megaflare, they will be at low health and still at risk of dying. Instead of trying to endure Megaflare, it is better to try to stagger him before Bahamut casts it. Everytime it starts counting down, use your strongest attacks. After enough damage it will be pressured, letting you fill up the stagger gauge. Hopefuly by the time it is at one you will be able to stagger it.

When Bahamut summons Ifrit, you will need to divert your attention and take it out ASAP. It is recommended you save your Limit Breaks just for Ifrit to take him out of the fight quickly. Equipping Fire linked with Elemental in your armory will also help greatly.
How to Beat Bahamut

Most of Pride and Joy's high damage attacks come from its front. Stick behind it and deal damage from there. It has one attack it can do that will do damage around it. It is signalled by it raising its arms so stay back when you see it raise its arms!

Stay Out of the Fire

Pride and Joy will set the battlefield on fire. If your party ends up standing in the fire it will deal massive damage and can easily make them faint after a few seconds. It is recommended to keep distance and use Lightning spells to deal damage from afar.

Pride and Joy will try to grab one of your party members. If successful it can instantly kill them after some time has passed. Prepare to use raise or even better, try to break one of its limbs to make it let go of the character before they faint.
How to Beat Pride and Joy Prototype

Register as a member and get all the information you want. (It's free!)
Login
Opinions about an article or post go here.
Opinions about an article or post
We at Game8 thank you for your support.
In order for us to make the best articles possible, share your corrections, opinions, and thoughts about "How to Beat Three-Person Team Vs. Top Secrets | Shinra Combat Simulator Guide" with us!
When reporting a problem, please be as specific as possible in providing details such as what conditions the problem occurred under and what kind of effects it had.