What Can Mog Do? | How to Let Mog Carry the Chalice | Final Fantasy Crystal Chronicles 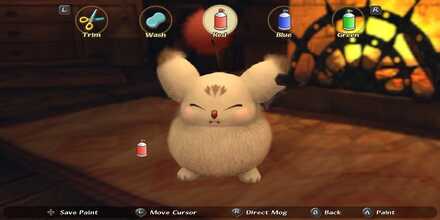 In single-player mode, Mog is a helpful ally who can carry the Crystal Chalice for you, power up your spells, and more. Learn how to use Mog effectively.

Your partner in Single-Player Mode

Mog is an NPC who will assist the player in single-player mode. Mog will not appear when multiple players are present. He may not look the part, but he can assist in battles, and his role in carrying the Crystal Chalice makes him indispensible.

How to Let Mog Carry the Crystal Chalice

Mog is able to carry the Crystal Chalice for you, but this process can be a bit confusing at first.

You'll want to do this immediately at the start of each dungeon. Also, be careful not to accidentally make Mog drop the Chalice, as you'll take damage when continuing ahead if it gets left behind.

Mog gets tired after too long

Although Mog is a formidable ally, his arm strength could be better. After an extended period of carrying the Chalice, he will start saying that he's tired and wants you to carry it instead. After this happens, Mog will start moving slowly. You can have Mog drop the Chalice and take it yourself, but it's also alright to simply stop and take a break. After a while, Mog will recover.

When you visit a Moogle House, you'll be able to play “Moogle Paint”, which allows you to cut Mog's hair. Giving Mog a trim will increase the time it takes for him to get tired, so be sure to keep your Mog in tip-top condition.

How to Combine Magic with Mog

When the player attacks enemies or takes damage, Mog's Magic Value will increase, and he will give encouragement like “Don't give up!”. This will be a sign that Mog is ready to use Magic.

However, Mog cannot use Magic when he is holding the Crystal Chalice. In order to combine Magic with Mog, you'll need to make him first drop the Chalice, then cast a Spell. Mog will cast a Spell of his own to combine with yours, which will result in an upgraded version.

Also, keep in mind that the Spell Mog casts will depend on his color. Play the Mog Paint Mini-game in any Moogle House and interact with Mog to spray him with a spray paint can and change him to a color which best aligns with your spellcasting needs.

I just finished the 20th year, and I received a letter from mog after the dungeon asking me to select a present for my family. Do you have any clue about where I can receive it ?

Register as a member and get all the information you want. (It's free!)
Login
Opinions about an article or post go here.
Opinions about an article or post
We at Game8 thank you for your support.
In order for us to make the best articles possible, share your corrections, opinions, and thoughts about "What Can Mog Do? | How to Let Mog Carry the Chalice" with us!
When reporting a problem, please be as specific as possible in providing details such as what conditions the problem occurred under and what kind of effects it had.