This is a guide to the basic battle system and a complete overview of techniques usable in battle in Final Fantasy 7 Remake (FF7R). Learn how combat works in the game, and how to use Abilities, Limit Breaks, and more.

For our complete strategy guide on the best combat techniques, check out our guide below!
How to Fight Like a Pro

Use Weapons to Defeat Enemies

By holding the □ button, your characters will automatically start attacking. By pressing the button repeatedly, you can execute combos which will deal more damage than simply holding down the button.

Each character will act differently based on the weapon they use. For example, Cloud will execute several slashes on holding down the □ button, while Barret will use his machine gun arm to continue firing bullets as long as the button is held.

When you attack an enemy multiple times in a row, the Focus Gauge below the HP bar will begin to fill up. When the Focus Gauge is completely filled, the enemy will be Staggered, granting an essential chance to deal extra damage to powerful foes.

TIP: Staggering enemies also adds to a character's Limit Gauge, so try to time your Stagger to deliver a powerful Limit Break to a Staggered enemy!

Use Magic and Abilities when the Enemy is Pressured

When an enemy is hit with repeated attacks, they will sometimes fall into a Pressured state, which indicates that they are more susceptible than usual to being Staggered. When this occurs, pelt the enemy with Magic and Abilities to fill up their Focus Gauge at a faster than usual rate. Don't miss this opportunity to Stagger enemies, as this can make or break a battle!

Use Tactical Mode to Strategize

Press the ✕ button at any time during battle to open Tactical Mode to slow the action to a crawl. This will allow you to select Magic, Abilities and Items from the menu in the bottom-left without being pressured for time.

There is also a Shortcut feature to use frequently-accessed commands with a single button press, but for dire situations, Tactical Mode is essential for healing your party and choosing your next move.

Give Commands to your Teammates

By pressing L2 or R2 during battle, you can switch to the menu of one of your uncontrolled characters, and issue a command for them to execute. This is a great way to use a secondary character's ATB charges while still controlling your primary attacker. When your primary characters is Bound and unable to move, use Commands to get one of your teammates on the move to free them!

In addition to simply issuing commands, you can switch your controlled character to act as them directly. Although it's not usually necessary to switch characters, getting familiar with each characters' battle strategy will help you fight effectively in situations where one character is more suited to a battle than another.

By holding down the R1 button, you can block incoming damage and reduce its effects. In addition, blocking damage will add to your ATB Gauge, making it worthwhile both offensively and defensively. Blocking is effective for either Physical or Magic damage, though when Cloud's Punisher Mode Ability is active, he loses the ability to block ranged attacks.

Blocking is one of the most useful commands in the game, so be sure to use Materia which will improve its effectiveness, such as Steadfast Block and Parry.

Punisher Mode can Counter when Blocking

When Cloud is in Punisher Mode, he becomes unable to defend against ranged attacks, but when hit with a melee attack, he will respond with a powerful counterattack. Punisher Mode is highly recommended for taking on melee-heavy enemies like Roche, Reno and Rude.

By pressing the ◯ button, you can roll to evade damage from an enemy and move quickly during battle. That said, evading is not effective for weathering damage, and you will still take damage if you are hit while dodging. You also won't be able to block while dodging, so be sure to read an enemy's movements carefully before choosing a dodge over a block.

To the right of each character's HP and ATB Gauges on the bottom-right of the screen, their Limit Gauge can be found. The Limit Gauge will be filled when Staggering enemies and when taking damage. These attacks can do huge damage to enemies, especially when they are Staggered. Check out our full guide for details on how to charge Limit Breaks.

The ATB Gauge and Battle Commands

Fill up the ATB Gauge by attacking and blocking

A character's ATB Gauge fills when they successfully land attacks on enemies or block their attacks. For each charge of the ATB Gauge, a character can use an Ability, a Spell, or an Item. Some Abilities or Spells, like Infinity's End, will require two ATB charges to use, so plan carefully to determine if you want to spend a single ATB charge or wait for the second ATB charge to use both.

How to Use Abilities

How to Use Weapon Abilities

When you equip a Weapon to a character, that character will be able to use an Ability associated with that Weapon. For example, equipping the Weapon Twin Stinger to Cloud will allow him to use the Counterstance Ability; however, he'll lose the Ability when it is removed.

How to Learn Weapon Abilities

Consumable Items can be used both inside and outside of battle to recover HP and MP, heal negative status effects, inflict damage on enemies, and more.

TIP: You can also hold the L1 button from the Items menu for the Multiuse option, which you can hold down to use the same item multiple times without having to reselect it!

Run Away from Enemies

During the story, you will sometimes encounter enemies which are too difficult to handle. In this situation, it can be best to run away and make sure your party is completely healed and correctly equipped to handle them.

Unlike the original turn-based game, you can now flee by simply running away from the battle area. Keep in mind that this is usually not possible for boss battles, so be sure to always fully heal and equip your party before taking them on.

How to Run Away (Flee) 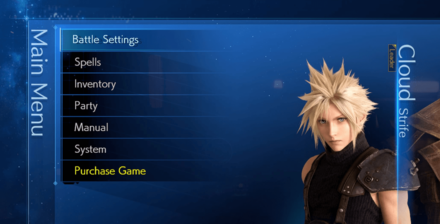 By selecting Battle Settings from the Main Menu, you can register Shortcuts to 4 frequently-used commands, making it easier to access commands that you often use without having to open up Tactical Mode every time. You won't be able to use these commands without a sufficient ATB charge, but having them registered will make it easier to maintain your flow in battle. 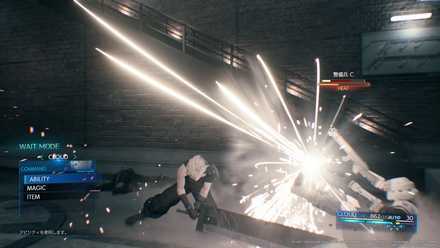 In order to allow for fans of both high-tension Action RPGs as well as traditional turn-based RPGs to enjoy the game, Final Fantasy 7 Remake includes a Classic Mode which alludes to a turn-based style of combat. In Classic Mode, characters will attack, block, and evade automatically, with the player focusing mainly on setting commands with the ATB Gauge.

In order for us to make the best articles possible, share your corrections, opinions, and thoughts about 「Battle System Explanation | Combat Basics | FF7 Remake」 with us!