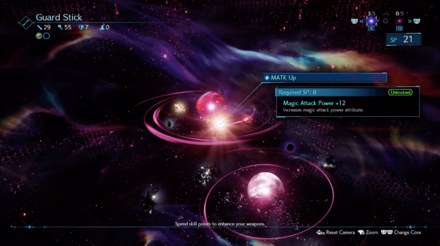 This is a guide on how the new weapon upgrade system works in Final Fantasy 7 Remake (FF7R) and the Intergrade PS5 Upgrade. If you are confused about weapon levels, how to use SP, or how to reset your weapon's skills, keep reading!

How to Upgrade Weapons

You Can Spend Skill Points to Power Up Weapons 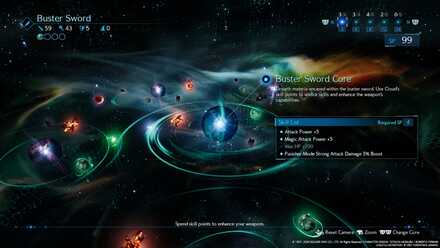 New to the remake, you can spend skill points (SP) to unlock a variety of Upgrades on the Cores of each weapon. Depending on the weapon, the choices of Upgrades is different, so you can choose to go with Magic or Physical-centered Weapons based on your playstyle.

SP is obtained through Leveling Up, or via Manuscripts found through various means as you play the game. You'll need Manuscripts to reach Weapon Level 6, so be sure to hunt them down!

Each Weapon Has Its Own SP Pool

As SP is independent for each weapon, do not be afraid to spend as much as you can to increase their power. 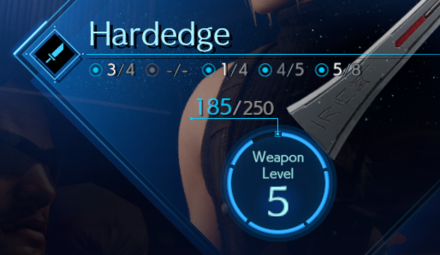 Every character has what's called a Weapon Level, and as it increases, you will unlock Sub-Cores containing more skills to unlock to keep powering up your weapons.

Weapon Level Increases Based on SP

As you get more SP from leveling or books, your Weapon Level will also increase. Each time a character levels up, they will gain 5 SP, however this will not be enough to reach the max Weapon Level of 6, so collecting Manuscripts is necessary.

How to Get Weapon Level 6

To unlock Weapon Level 6 for each of a character's weapons, you'll need that character's SP to hit 250. Each character can reach up to 216 SP by leveling up; after that, they'll need Manuscripts to gain more SP.

Only 3 Manuscripts per character are available on Classic, Easy, or Norrmal Mode – to unlock the other 11 Manuscripts for each character, you'll need to challenge Hard Mode, which is unlocked after finishing the main story once.

As 3 Manuscripts will yield a maximum of 246 SP, you must play Hard Mode at least to some extent to unlock Weapon Level 6. Be sure to check out our exhaustive Hard Mode Guide to learn everything you should know first before jumping in!

Each weapon comes with its own weapon ability that can be used as long as the weapon is equipped. However, these weapon abilities can be learned permanently if you max out their proficiency. To earn proficiency, you must use the skill in battle. Each use will grant 10% to the proficiency bar.

Each weapon also has a proficiency bonus that, when fulfilled, gives a larger 30% boost to proficiency. Take advantage of these to quickly learn each weapon ability!

Aside from their usefulness in battle, acquiring 16 weapon abilities will complete Battle Intel Report 17 and get you the Skill Master Materia.

Those on the hunt for the Platinum and other completionist challenges will also want to acquire every weapon ability to earn the Weapons Expert trophy.

How to Reset Weapon Upgrades 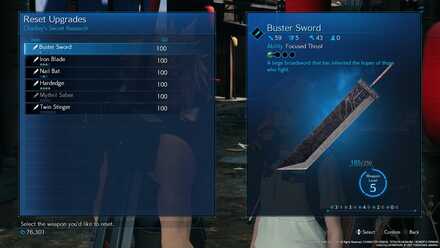 If you speak to Chadley and select Reset Upgrades, you can spend 100 Gil to regain all of the SP for a weapon and redo your upgrades. This can be done repeatedly whenever Chadley is around, so don't be afraid to try out different upgrade combinations!

See more comments (9 Comments)
Opinions about an article or post go here.
Opinions about an article or post
We at Game8 thank you for your support.
In order for us to make the best articles possible, share your corrections, opinions, and thoughts about "Weapon Upgrade Guide | How to Learn Weapon Abilities (Intergrade Updated)" with us!
When reporting a problem, please be as specific as possible in providing details such as what conditions the problem occurred under and what kind of effects it had.