Bow: Location and Best Upgrades | Last of Us 2

This page about the Bow, a Long Gun in The Last of Us Part II. Read on to learn how to get the Bow, as well as the best weapon upgrades for it, and how to use the Bow.

Best Upgrades for the Bow

With only three upgrades available, Draw Speed is the go-to upgrade for the bow, since slow draw speed is the weapons biggest weakness, and this will improve the speed you can use it with significantly. After that, upgrading stability will in turn increase accuracy and allow you to take out enemies more reliably.

The rangefinder upgrade is rather unnecessary, and should mainly only be gotten if you have extra parts to spare, or you just really enjoy fighting with this weapon.

How to Use the Bow 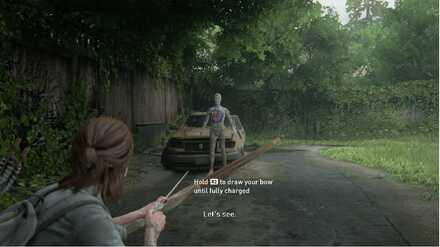 The bow is similar to the rifle in that it is great for long ranged combat. However, the key difference is that the bow is silent, so it is much better when your enemies have not yet been alerted of your presence. If you are the type of player who prefers Stealth Kills and picking off enemies slowly and cautiously, the bow will be excellent for you.

You will still need to be smart though, only taking out enemies that are away from their allies, and not currently engaged in conversation. This can allow you to widdle down a group's numbers so that if they do find you, there will be way less enemies to take out.

For bows, landing headshots is vital for two reasons. The first one is the fact that a head shot is s guaranteed kill (However, even if you don't get a head shot, there is still a good chance you will take out human foes and runners in a single shot). The second one is the fact that landing a headshot gives you a chance to get the arrow back, allowing you to conserve ammo!

Unlike other weapons where you find ammo lying around, arrows can be crafted by using the following recipe (which is learned after obtaining the bow automatically):

Not surprisingly though, very slow draw speed and fire rate means that it is not good in close-ranged situations. When an enemy has already spotted you, or enemies are rushing at you, you'll definitely want to switch to something like the Shotgun or Pistol.

This weapon is obtained automatically in Seattle Day 2 - Hillcrest, during a cutscene that happens after you encounter a runner in a garage. Once you reach this point in the story, you are guaranteed to pick up the weapon.

Register as a member and get all the information you want. (It's free!)
Login
Opinions about an article or post go here.
Opinions about an article or post
We at Game8 thank you for your support.
In order for us to make the best articles possible, share your corrections, opinions, and thoughts about "Bow: Location and Best Upgrades" with us!
When reporting a problem, please be as specific as possible in providing details such as what conditions the problem occurred under and what kind of effects it had.