Jordan: Age, Voice Actor, and Backstory | Last of Us 2

Jordan is a new character appearing in The Last of Us Part II (TLoU 2). This page will explain Jordan's backstory, voice actor, and how old Jordan is. 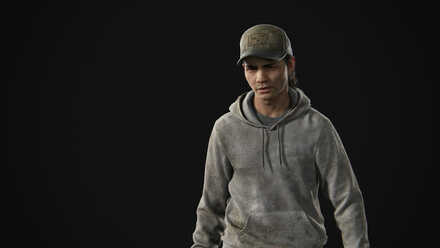 After the fireflies disbanded, he went together with his friends to join the WLF in Seattle.

What Happens to Jordan?

Jordan along with her friends included in the Salt Lake Crew travel to Jackson to help Abby take revenge on Joel for attacking the Fireflies. After this event, Jordan got assigned to the Serevena Hotel to evacuate the WLF at Hotel and the School and get all the remaining supplies.

When he arrived at the Serevena Hotel, found Nick's dead body and was next seen interrogating Ellie at the Eastbrook Elementary School. In the middle of his interrogation, Mike interrupts him and he learns that Isaac told Mike to execute all trespassers.

Jordan tries to stop Mike since he wants to learn if there were more people from the Jackson Community that are going to attack the WLF. Mike shoves him and tries to shoot Ellie, but Dina kills Mike from the glass roof and Jordan was able to shoot the glass to make Dina fall from the roof.

After that, he tries to kill Dina by choking her, but Ellie manages to escape from her binds and stab Jordan in the neck killing him in the process.

Register as a member and get all the information you want. (It's free!)
Login
Opinions about an article or post go here.
Opinions about an article or post
We at Game8 thank you for your support.
In order for us to make the best articles possible, share your corrections, opinions, and thoughts about "Jordan: Age, Voice Actor, and Backstory" with us!
When reporting a problem, please be as specific as possible in providing details such as what conditions the problem occurred under and what kind of effects it had.