Jesse: Age, Voice Actor, and Backstory | Last of Us 2

Jesse is a new character appearing in The Last of Us Part II (TLoU 2). This page will explain Jesse's backstory, voice actor, and how old Jesse is. 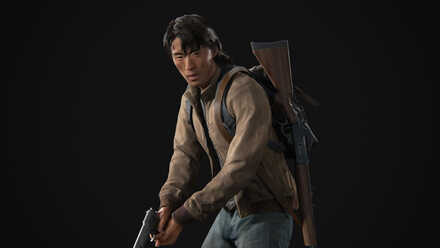 Jesse is one of the leaders of the Jackson Patrol group, where he is being trained personally by Joel. During the E3 2018 game trailer, he approaches Ellie and complains about her 'Old Man' lecturing him about the patrols.

He also used to have a relationship with Dina, and recently broke up with her. Even if Ellie and Dina got together as a couple, he didn't mind it at all and would sometimes tease Ellie about their relationship.

What Happens to Jesse?

Click to View (Contains Spoilers)
A day after Ellie and Dina leave Jackson to avenge Joel, Jesse sneaks out of Jackson to follow Ellie and help them. Jesse was able to find Ellie at Seattle while fighting with the WLF. Soon after they escape the WLF, they head back to the Theater so he can recover from his wounds.

After Jesse recovered from his wounds, he and Ellie now went out to find Tommy and planned to return to Jackson. At some point in their journey to find Tommy, they split up since Ellie insisted that she want go to the Aquarium to look for Abby while Jesse wants to continue finding Tommy.

After Jesse reunites with Tommy, they head over to the Aquarium and take Ellie back to the Theater to plan how to head back to Jackson. Soon after that, Jesse dies after he is shot in the head by Abby when he tried to run over and help Tommy.

Register as a member and get all the information you want. (It's free!)
Login
Opinions about an article or post go here.
Opinions about an article or post
We at Game8 thank you for your support.
In order for us to make the best articles possible, share your corrections, opinions, and thoughts about "Jesse: Age, Voice Actor, and Backstory" with us!
When reporting a problem, please be as specific as possible in providing details such as what conditions the problem occurred under and what kind of effects it had.