Semi-Auto Pistol: Location and Best Upgrades | Last of Us 2

Best Upgrades for the Semi-Auto Pistol

Stability is the best upgrade to get, as it supplements the pistol's mediocre accuracy, and allows you to land more critical shots on your enemies via head shots. The recoil upgrade is good for a similar reason, and these two upgrades will allow you to make better use of the weapon overall.

Capacity would be the next upgrade to go for, as being able to hold up to 10 bullets per magazine lets you hold more bullets and go longer without reloading (this upgrade can be prioritized sooner if you tend to miss many of your shots). The Fire Rate upgrade is the last one you will want to upgrade, since the pistol already has a decent fire rate, and the other upgrades are more useful.

How to Use the Semi-Auto Pistol 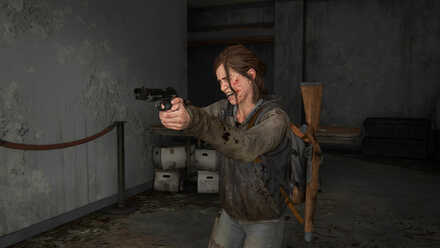 The semi-auto pistol is the most basic gun in your arsenal, and the first one you will learn to use. Due to its high fire rate, it is great in scenarios where enemies like runners are rushing toward you. It will not deal as much damage as some of the other weapons, so landing headshots is extremely important, as it will take several shots to take down foes with it otherwise.

This pistol is really best made use of at short range, so in smaller spaces when accuracy is less of an issue. One trick for conserving ammo, which will work against most enemies is to shoot them in the leg to stun them, and then run in to follow up with a melee attack than can finish them off. Clickers will be hard to take down with this gun alone, so a shot in the head or legs to stun them is the best tactic to deal with them.

When dealing with several enemies at once, such as runners, make sure to stay moving. Although the weapon is great for close range crowd control due to its quick fire rate, you don't want to get surrounded with no ammo in the clip, so place your shots carefully.

How to Get the Semi-Auto Pistol

The pistol is obtained by default in Jackson - Waking Up after first gaining control of Ellie.

Register as a member and get all the information you want. (It's free!)
Login
Opinions about an article or post go here.
Opinions about an article or post
We at Game8 thank you for your support.
In order for us to make the best articles possible, share your corrections, opinions, and thoughts about "Semi-Auto Pistol: Location and Best Upgrades" with us!
When reporting a problem, please be as specific as possible in providing details such as what conditions the problem occurred under and what kind of effects it had.