Jerry: Age, Voice Actor, and Backstory | Last of Us 2

Jerry is a new character appearing in The Last of Us Part II (TLoU 2). This page will explain Jerry's backstory, voice actor, and how old Jerry is.

Warning: This article contains major spoilers! Proceed with caution if you have not played TLoU2 yet. 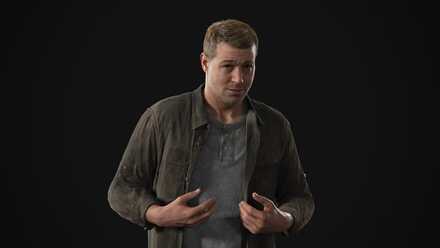 Jerry was the surgeon that was originally going to kill Ellie to develop a cure to the disease that has caused the world's population to drop by 60%. However, anyone who played TLoU1 will know that this ends with Joel killing all of the Fireflies and surgeons, including Jerry.

A big plot device to the game is Jerry's death, which caused Abby to seek revenge by killing Joel. Jerry is seen in a flash back saving a zebra from a barbed wire fence, and although willing to kill Ellie to make a cure, he seems a bit uneasy with the idea, making Jerry look like a much kinder individual.

Register as a member and get all the information you want. (It's free!)
Login
Opinions about an article or post go here.
Opinions about an article or post
We at Game8 thank you for your support.
In order for us to make the best articles possible, share your corrections, opinions, and thoughts about "Jerry: Age, Voice Actor, and Backstory" with us!
When reporting a problem, please be as specific as possible in providing details such as what conditions the problem occurred under and what kind of effects it had.