Yara: Age, Voice Actor, and Backstory | Last of Us 2

Yara is a new character appearing in The Last of Us Part II (TLoU 2). This page will explain Yara's backstory, voice actor, and how old Yara is. 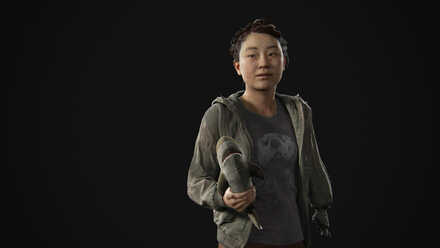 Yara is known to be Lev's older sister. She was also a member of the Seraphites like her mother and younger brother. When she became a teenager, she was assigned to become a soldier for the Seraphites.

When the assignment for Lev came from the Elders, she helped Lev escape from the Seraphites. Because of this, both Yara and Lev were deemed as apostates and are now being hunting down by the Seraphites.

What Happens to Yara?

Yara can be first seen when she was captured by Emily, another Seraphite, who was trying to hang Abby and execute Yara. Yara's left arm got destroyed and is saved by Lev then the three of them escape the forest while being attacked by Stalkers.

After their escape from the forest, Yara and Lev decided to settle down in an abandoned trailer to rest before moving again. Yara's condition got worse because of her broken arm but luckily, Abby returned for them and brought them to the Aquarium.

Yara's arm got amputated my Mel with help from the supplies Abby and Lev got from the Hospital. She then stayed at the Aquarium for a while for her arm's recovery. When Lev ran away to get their mother to escape with them, Yara and Abby chased after Lev before being forced to stop because Abby had to help Manny defeat Tommy.

While Abby was helping Manny defeat Tommy, it was assumed that Yara moved on her own and helped Abby defeat Tommy by stabbing him. Yara and Abby then continued to go after Lev at the Seraphite Island.

When they arrived at the Seraphite Island, they snuck through multiple Seraphite outposts in order to reach Lev at their house. Once they found Lev, they attempted to escape the island by going to Haven and leaving by boat.

Just before they reached Haven, they were attacked by the WLF and was shot down by a WLF member. The last thing she was able to do was shoot Isaac in the back to help Abby and Lev escape from the WLF. After that, she was shot multiple times mercilessly and dies on the spot.

Register as a member and get all the information you want. (It's free!)
Login
Opinions about an article or post go here.
Opinions about an article or post
We at Game8 thank you for your support.
In order for us to make the best articles possible, share your corrections, opinions, and thoughts about "Yara: Age, Voice Actor, and Backstory" with us!
When reporting a problem, please be as specific as possible in providing details such as what conditions the problem occurred under and what kind of effects it had.