Lev: Age, Voice Actor, and Backstory | Last of Us 2

Lev is a new character appearing in The Last of Us Part II (TLoU 2). This page will explain Lev's backstory, voice actor, and how old Lev is. 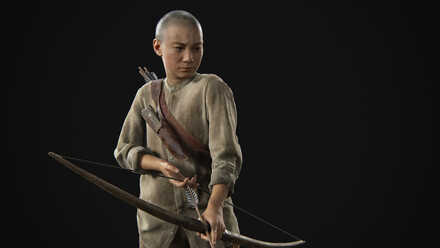 Lev is the younger brother of Yara, another new character. They were both revealed in the Paris Games Week, along with a mysterious woman.

Both Lev and his sister Yara are members of the Seraphites. As you can see from the picture, they have a scar on their faces to show they are part of the same faction.

Before calling himself Lev, his original name was Lily. This happened due to the Seraphite Elders assigning him to be a wife to one of the other Elders. In defiance, he shaved his head and declared himself as a male and a soldier like her sister.

What Happens to Lev?

Lev is first seen helping Yara during the time when Emily, another Seraphite, was trying to hang Abby and execute Yara. Lev, together with Yara and Abby, manage to escape the forest full of Stalkers together and settle down in an abandoned trailer.

When Yara's condition got worse, Abby returned to them and led them to the Aquarium to help amputate Yara's arm but, they lacked the supplies needed for this. Lev then accompanied Abby through a skyscraper inside Seraphite territory in order to cross the rapids going to the Hospital.

Right before they about to successfully cross the broken crane, they both fell into a pool which forced them to descend through the hotel full of Infected. When they reach the Hospital, Lev waited for Abby until she got the needed supplies from the Hospital and they went back to the Aquarium together.

After Yara's arm got amputated, Lev ran away from the Aquarium in hopes that he can bring their mother with them in escaping the Seraphites. Lev reaches the Seraphite island and accidentally kills their mother while trying to defend himself.

Lev finds the Seattle Map that Ellie used to track down the Salt Lake Crew and gives it to Abby. He then accompanies Abby to the Theater to help her get revenge on Ellie. Just before Abby kills Dina, Lev stops Abby and convinces her to leave them alone.

Many months later, Lev accompanies Abby at Santa Barbara to look for the remnants of the Fireflies. After successfully contacting the Fireflies, they learn that the Fireflies are on Catalina Island.

When they about to return to their sailboat, they got ambushed and captured by the Rattlers to become slaves. Some time later, Ellie found both of them tied to the Pillars and freed them before Abby and Lev were able to escape from Santa Barbara.

Register as a member and get all the information you want. (It's free!)
Login
Opinions about an article or post go here.
Opinions about an article or post
We at Game8 thank you for your support.
In order for us to make the best articles possible, share your corrections, opinions, and thoughts about "Lev: Age, Voice Actor, and Backstory" with us!
When reporting a problem, please be as specific as possible in providing details such as what conditions the problem occurred under and what kind of effects it had.