Tommy: Age, Voice Actor, and Backstory | Last of Us 2

Tommy, Joel's younger brother from The Last of Us, rejoins the cast in The Last of Us Part II (TLoU2). This page will explain Tommy's backstory, voice actor, and how old Tommy is. 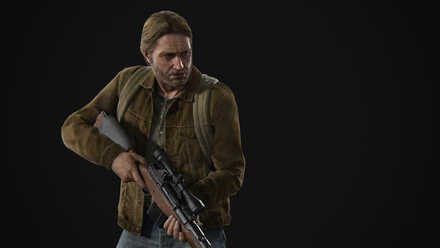 Another returning character from the first game in the series, Tommy is one of the leaders of the community in Jackson. Along with his wife Maria, he lives in peace, even with the dangers of the infected and other people still lurking outside of their community.

He and Joel often take the tedious Mountain Patrols because they like to rest on the couches in the lobby of the Mountain Lodge.

What Happens to Tommy?

Click to View (Contains Spoilers)
After Joel's death, he went out on his own to find Abby and avenge Joel's death. He arrived at the Serevena Hotel and interrogated Nick on Abby's location. After that he goes to the TV station and interrogates Leah next but, he is forced to escape when the Seraphites came.

He is now shown at the Marina sniping off Manny's whole platoon. While Abby and Manny tried to get close to him, he manages to kill Manny before getting into a close quarters fight with Abby but, he loses the fight when Yara stabs him and Abby pushes him to the sea.

Jesse then finds him and they head over to the Aquarium and take Ellie back to the Theater to plan how to head back to Jackson. Shortly after this, Abby attacks him in the theater and holds him hostage from Ellie. When Abby tries to shoot Ellie, Tommy tries to stop Abby but is shot by an arrow in the leg by Lev and shot in the side of the head by Abby causing him to lose his right eye.

After the events in the theater, they head back to Jackson and Ellie promises him that she will make Abby pay for what she had done. During this time, Tommy and Maria have been taking some time apart from each other.

Months later, he goes to Ellie and Dina's house and informs Ellie about Abby's location since he cannot go because of his leg and eye. Ellie refuses to help and he leaves the house very disappointed since Ellie had promised him that she will make Abby pay.

Register as a member and get all the information you want. (It's free!)
Login
Opinions about an article or post go here.
Opinions about an article or post
We at Game8 thank you for your support.
In order for us to make the best articles possible, share your corrections, opinions, and thoughts about "Tommy: Age, Voice Actor, and Backstory" with us!
When reporting a problem, please be as specific as possible in providing details such as what conditions the problem occurred under and what kind of effects it had.