Nora: Age, Voice Actor, and Backstory | Last of Us 2

Nora is a new character appearing in The Last of Us Part II (TLoU 2). This page will explain Nora's backstory, voice actor, and how old Nora is. 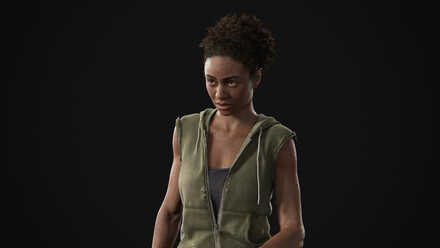 Nora is one of Abby's close friends and is also a part of the Salt Lake crew which consists of former fireflies from Salt Lake City, Utah.

In the game she is shown as a medic to the WLF and is in charge of the WLF's medical supplies and the morgue.

What Happens to Nora?

Nora along with her friends included in the Salt Lake Crew travel to Jackson to help Abby take revenge on Joel for attacking the Fireflies. After this event, she is shown to be a medic incharge of the medical supplies and the morgue at the Forward Operating Base.

After being stationed in the FOB, she was transfered to the Hospital to facilitate in getting all the remaining supplies inside the Hospital. During this time, she learned that Abby had gone AWOL and was tied inside the elevator.

Nora helped Abby escape and led her to the lower levels of the Hospital so that Abby can find the supplies she needed in order to amputate Yara's broken arm.

Some time later, Ellie invades the Hospital and tracks down Nora. Nora tries to escape from Ellie but is cornered into a hallway with a hole leading to the spore infested levels of the Hostpital.

Ellie drags her down to the spore infested levels and she still tries to escape Ellie. Ellie soon catches up to her and attemps to interrogate her but, she refuses to sell out her friend's locations. She then dies when Ellie beats her up with a pipe because she refused to answer.

Voice actress: Chelsea Tavares Confirmed in her IG &Twitter bio. Recognized her voice from All American on Netflix: https://www.instagram.com/chelsearoycetavares/?hl=en https://twitter.com/chelseatavares

Register as a member and get all the information you want. (It's free!)
Login
Opinions about an article or post go here.
Opinions about an article or post
We at Game8 thank you for your support.
In order for us to make the best articles possible, share your corrections, opinions, and thoughts about "Nora: Age, Voice Actor, and Backstory" with us!
When reporting a problem, please be as specific as possible in providing details such as what conditions the problem occurred under and what kind of effects it had.