All Trailers and Demos as of 2020: Everything We Know | FF7 Remake

We watched each trailer and demo for Final Fantasy VII Remake and compared them to the original game. Here are our takes and reactions to each video, all the new information contained, and everything we know so far.

The original trailer for the game, released at E3 2015, also acted as the initial reveal of the game. On first blush, it reveals very little about the game and story, beyond some enticingly high-definition views of Midgar, and Cloud from the rear with his trademart Buster Sword.

The first half of the trailer also shows a location called South Edge, not previously featured in Final Fantasy VII, though it might be related to the location Edge from Final Fantasy VII: Advent Children. This location hasn't been shown in further trailers, but it begs the question of whether the Remake will include new areas not featured in the original game.

This short but sweet trailer finally showed footage from the familiar Final Fantasy VII story, including early-game story points such as AVALANCHE's attack on the Mako Reactor at the the start of the game, Cloud's first encounter with Aerith, and even a short flash of Sephiroth from behind.

This trailer's most startling reveal, however, was the shift to an Action RPG system akin to Final Fantasy XV. This proved that the game would not simply be a graphical improvement to an original, but an entirely new game in its own right.

During “Final Fantasy VII: A Symphonic Reunion”, an orchestral concert performing the music from the game, fans were surprised with a new trailer for the upcoming Remake.

In this trailer, we saw more story scenes, including dialogue between Cloud, Barret and members of AVALANCHE, Biggs, Wedge and Jessie. The trailer also ends with Aeris and Cloud being surrounded by a mysterious ghost-like haze, which continues to appear in future trailers as well. However, the most significant reveal was at the very end, when the original release date of March 3rd, 2020 was first included.

Just two days after the Symphonic Reunion trailer, a much longer-form trailer was shown at E3 2019. This trailer was also paired with a playable demo of a battle with the Scorpion Sentinal boss, giving players their first hands-on experience with the new real-time gameplay style.

The longest trailer so far, the E3 trailer shows clips of new gameplay aspects, including scenes of combat while riding Cloud's bike, using the Triangle button to use new Abilities not featured in the original game, as well as multiple boss fights with Cloud, Barret, Tifa and Aerith all joining in combat.

Three months after the wave of new information that came with E3, Tokyo Game Show 2019 offered a new, story-heavy trailer. It starts off from the getgo with apperances by mysterious ghosts, resembling the haze appearing in the previous two trailers. 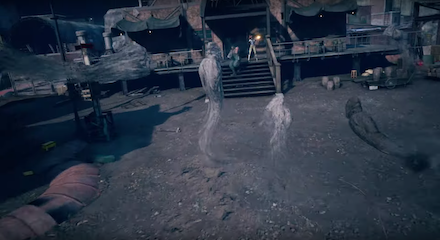 The repeated apperance of these ghost-like forms implies they may play a significant role in the story, a possible deviation from the original plot.

This trailer features appearances by Turks Reno and Rude, along with a new character, the SOLDIER Roche.

The latest trailer, released for The Game Awards 2019 award show, is short but sweet – although it shows little new information, its movie trailer-esque cinematography is sure to get fans hyped for the game. Once again, the mysterious ghostly haze makes an appearance in the trailer, further deepening suspicions about its role in the story.

Fans were excited to see some fan favorite moments from the original game return in beautiful HD rendering. The scene of Cloud and Tifa's promise from their childhood; Red XIII's appearance; and most important, Cloud in makeup and pig-tails, adding a new contender to the ever-burning 'best girl' debate.

The Opening Movie of the game was released on February 14th, 2020. With this, fans got a much clearer view of the re-rendering of Midgar, and a view into what the development team wants to highlight for players to see at the start of the game, whether on their first ever experience with Final Fantasy 7, or a reunion with the game after its original release in 1997.

In the days leading up to the release of Final Fantasy 7 Remake, the development team has released these videos containing both interviews with the team about their feelings and focus while making the game, as well as new footage giving details of the story, battle system and background of the game. Be sure to check these out to max out your excitement's Limit Gauge!

All Demos Released So Far 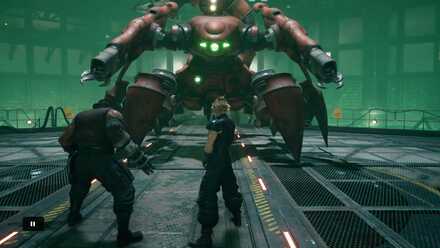 A playable Demo of the start of the game, up through the battle with Scorpion Sentinel, has been released to the Playstation Store. Find out how to download the Demo and read our full strategy guide at the link below.

How to Download the Demo and Demo Walkthrough & Guide

This initial hands-on exposure to the game's play Active Battle play style was well-received at E3 2019. Although no official video was released, this playable demo showed off smooth switching between Cloud and Barret, each using their own advantages at specific points of the battle to take down the Scorpion Sentinal, a boss in the first part of the game.

The first official demo video released, this video shows off Cloud, Aerith and Tifa teaming up against Abzu, translated as “Aps” in the original game. This video shows off how Summons work in the game, with Cloud summoning Ifrit to fight alongside the party. Unlike the original game, Summons do not appear for a single powerful attack, but as an ally NPC to temporarily go head-to-head with the enemy.

Still can't believe I was able to live while experience this master piece of a game twice in my lifetime.

Lots of stuff are here!! Can't get enough of the videos. Make me want to play the game asap!!

Register as a member and get all the information you want. (It's free!)
Login
Opinions about an article or post go here.
Opinions about an article or post
We at Game8 thank you for your support.
In order for us to make the best articles possible, share your corrections, opinions, and thoughts about "All Trailers and Demos as of 2020: Everything We Know" with us!
When reporting a problem, please be as specific as possible in providing details such as what conditions the problem occurred under and what kind of effects it had.