This is a guide to Gambits, a mechanic in Fire Emblem: Three Houses (FE3H). Read more to find out about how to use gambits, and how to use Gambit Boosts. 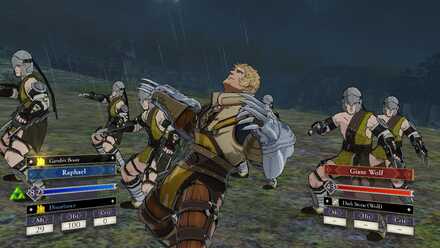 Gambits are a new mechanic in Fire Emblem: Three Houses. Your units are students at the Officers' Academy at Garreg Mach, meaning they're learning how to lead. This is reflected in the presence of equippable Battalions and their attacks, called Gambits.

Each Battalion has a specific Gambit that has multiple effects, and it can hit multiple grid squares depending on the Gambit. There are gambits that can group heal, or increase movement of surrounding allies. Most gambits are offensive, and they affect a certain formation of units with debuffs in addition to damaging them. They also cannot be counterattacked.

Gambits offer unique buffs like group healing for those without Fortify or Stride at the start of a battle to allow your troops to charge forward.

Gambits, whether they hit or miss, cannot be counterattacked. This is good for strong opponents who may severely damage you if you cannot kill them in one hit. This is also very good to use against monsters.

Attack Multiple Enemies at Once

Gambits can attack multiple enemies at once, with each gambit having varying areas of effect. With properly used Gambits, you can kill an enemy and soften all adjacent enemies for your allies. Take note that you cannot kill multiple enemies with Gambits, and only the targeted enemy can be killed. The rest will only have to endure splash damage, but will retain some HP.

Monsters attacked by Gambit boosts end up stunned and distracted. There will be a red field that denotes where their next area of attack will be. This will allow your units to successfully move away from that area, or allow you to send a strong unit to distract the beast away from your main force.

Additionally, the area of attack from Gambits is a great way to destroy all of a monster's armor and acquire the extra loot.

They Do Not Have Durability

Unlike weapons, Gambits do not have durability. Rather, they have a set amount of uses per battle. This is a good way to damage units without using a weapon for non-magic users.

What Are Gambit Boosts? 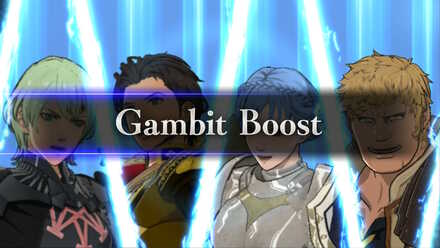 Gambit boosts add to your Gambit's attack when allies are nearby. It is basically linked attacks, but for Gambits.

A Gambit Boost raises your Gambit's Might and Hit, and increases the higher your ally's support rank is. This also stacks, so multiple allies increase Might and Hit.

How to Improve Gambits

Gambits have their own stats, and these stats can be increased by doing these actions:

Level up the Battalion

Like individual characters, Battalions get experience from battle as well. They can go up to level 5, and they increase their stats every level.

Units with high charm are more effective with Gambits. There are multiple ways to increase charm, such as using Golden Apples, or participating in successful Tea Times.
What Does Charm Do?

Golden Apples and Black Pearls increase a character's charm permanently by 1 or 2 respectively.

If you have a succesful tea time, the charm of both your character and the character you had tea time with increases.

The item your students give you during your character's birthday increases charm by 2 when equipped, as does the ability of your House Leaders, Pomp and Circumstance.

Train Authority during classes, seminars and activities to increase the stats of a unit's equipped battalion. Additionally, using Gambits in combat increases authority like using any weapon increases your skill in that weapon.

What does Authority Do?

Register as a member and get all the information you want. (It's free!)
Login
Opinions about an article or post go here.
Opinions about an article or post
We at Game8 thank you for your support.
In order for us to make the best articles possible, share your corrections, opinions, and thoughts about "Gambit Guide" with us!
When reporting a problem, please be as specific as possible in providing details such as what conditions the problem occurred under and what kind of effects it had.