Is There a Weapon Triangle? | Fire Emblem: Three Houses (FE3H)

Longtime fans of the Fire Emblem series will be familiar with the Weapon Triangle, a mechanic that grants weapon advantage and disadvantage. Has the weapon triangle been removed from Fire Emblem: Three Houses (FE3H), or has it just been changed? Read on to find out more!

What is the Weapon Triangle?

The Weapon Triangle is the weapon type advantage system of the Fire Emblem series. It's a system meant to make use of the different types of weapons to counter certain enemies in the game.

How Does the Weapon Triangle Work?

While in some games, tomes have their own wapon advantage system, they are also often left out of the equation, which is also the case for bows and daggers.

Is the Weapon Triangle In FE3H?

Yes, but in a very different form 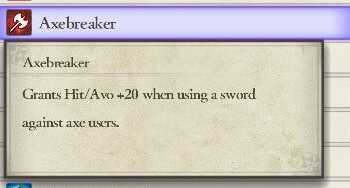 The Triangle Weapon, as it is normally known, has technically been removed from the game. However, there are several abilities in the game that allow weapon advantages to still exist in the game. These abilities come in the form of weapon breaker abilities that grants your units extra avoid and hit rate against the enemy you have an advantage against.

This means that weapons are no longer inherently advantageous against another type, but with the right abilities equipped, they will be more advantageous than using other types of weapons in the same scenario.

Register as a member and get all the information you want. (It's free!)
Login
Opinions about an article or post go here.
Opinions about an article or post
We at Game8 thank you for your support.
In order for us to make the best articles possible, share your corrections, opinions, and thoughts about "Is There a Weapon Triangle?" with us!
When reporting a problem, please be as specific as possible in providing details such as what conditions the problem occurred under and what kind of effects it had.