What Does Dexterity Do? | Fire Emblem: Three Houses (FE3H)

This is a guide to Dexterity, one of the stats of Fire Emblem: Three Houses. Here we will explain how this stat works, how it affects your units, and how you can use it to optimize your army.

What Does Dexterity Do?

Dexterity is one of the eight main stats. It affects hit rate and how often a unit scores critical hits. You can determine a unit's hit rate and critical hit chance by looking at the stats displayed when selecting a unit to attack, under the labels 'Hit' and 'Crit' respectively.

As you can see, the same character attacking the same unit has a higher hit rate and crit chance after using a Secret Book to add +2 Dexterity.

How to Increase Dexterity

You can increase the Dexterity of units by them levelling up, using items, or equipping abilities. 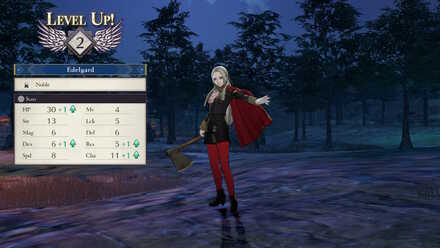 Whenever a character levels up, some of their stats increase. Some characters have a predisposition to growing in Dexterity, and others will just naturally grow it over time. However, this is cannot be controlled, and you cannot choose to make them increase this skill, unlike the other two options.

You can increse a character's dexterity permanently by using a Secret Book or an Aillel Pomegranate.

Certain Abilities increase a character's dexterity. One particular example is a Cavalier's class mastery ability of Dexterity +4. To learn how to equip abilities, don't forget to check out our page on How To Learn and Equip Abilities!

When some units level up their Authority skill, they gain the ability to rally other units, temporarily boosting their stats. Dexterity is one of the possible boosts provided by Rally.

How to Use Dexterity

Characters with high Dexterity are best given weapons and classes that accentuate their benefits.

Killer Swords, Bows, Axes, and Lances all add a bonus to their wielder's critical hit rate. This stacks with the Crit bonus from high dexterity, so this can greatly increase a character's chance to hit criticals. Other weapons also add crit, and the same rule applies.

There are different abilities that add Crit when using certain weapons, like Sword Crit +10 or Bow Crit +10.

The Assassin's class mastery ability is Lethality, which can instantly kill whoever the Assassin is attacking. It's trigger percentage is 1/4 of a character's Dexterity, so high dexterity characters are ideal for this class.

Take note that since this is a class mastery ability, it needs to be equipped, and once a character has it equipped, it affects them even if they change classes.

Register as a member and get all the information you want. (It's free!)
Login
Opinions about an article or post go here.
Opinions about an article or post
We at Game8 thank you for your support.
In order for us to make the best articles possible, share your corrections, opinions, and thoughts about "What Does Dexterity Do?" with us!
When reporting a problem, please be as specific as possible in providing details such as what conditions the problem occurred under and what kind of effects it had.