This is a guide to Recruitment in Fire Emblem: Three Houses. Read here to find out about how to recruit in FE3H, who you can recruit, and what the requirements are!

How Do You Recruit Someone?

To recruit someone, simply choose the 'Recruit' option when talking to them. They will then either accept, or reject by being mildy interested, or disinterested altogether. If rejected, a message shows a stat and a skill your character needs to have a certain level in in order to recruit them. If they accept, you have one final option to accept them into your house or decline them. 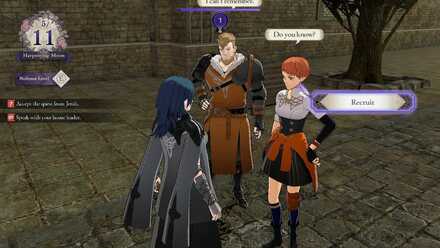 Alternatively, if you reach the required threshold, in the middle of the week the student may approach you and ask to join your house. Like them accepting your invitation, you have one final option to accept them into your house or decline them.

You cannot recruit House Leaders and their right-hands, but everyone else can be recruited if you meet the requirements. For Church-affiliated characters however, the requirements vary. Look at the Church of Seiros section below to see the specific requirements for each character.

The Best Way To Recruit Units

The best way to recruits is to increase your bond with them. This is most important for units who prefer skills that need prerequisite classes before being able to upgrade outside of free time, like Riding which requires you to be a cavalier if you want to improve it through combat. This can be done by either spending free time to eat with them, or better yet, having them battle with you in by asking for mission assistance.

Can You Recruit Everyone?

It is possible to recruit everyone except House Leaders and their right hands. Here we will explain the best way to possibly do this.

First off, pick a female character if you are not going to choose the Blue Lions house. This will instantly allow you to recruit Sylvain.

Do not spend free time or gifts on students who look for the skills your character is naturally attuned to, which are most likely Sword and Authority. Alternatively, if you're thinking of focusing more on your Faith strength, do not spend time and gifts on those students who prefer it. Over the course of the game, your skill level should rise enough to be able to recruit them even without a support level.

Once your preferred skills are enough to recruit those you want, upgrade either your Lance, Reason, or Bow skills in combat because this will allow you to recruit two people if you reach the skill level of C.

You can also use Brawling or Axe weapons in combat but that will only allow you to recruit one person for getting proficient in that weapon.

While doing this, make sure to try and build support with the students whose recruitment skills have a prerequisite class to improve in combat, and take Faculty Training in their respective skills. These are harder to build so it will be useful to have the required recruitment level of these skills lowered by raising your support level with these characters to B.

For recruiting students from the other house, they look for certain skills and stats in your character. If you build support with them, the minimum skill required to get them to join your house is lowered. Refer to the table below to see which the approximate skill level you need per support value. If the character does not join you after attaining this level, consider using items to boost their preferred stats as well.

*A Support in Part 1 only attainable in New Game+

If your character is female, Sylvain will be willing to join your house right away, regardless of your skills.

*Hilda is not recruitable for Black Eagle at the start. She can be recruited at the Chapter 12 only if the player sides with the church and you meet her requirements.

These characters cannot be recruited like the students from another house. They are only available for recruitment at certain points in the story, and can leave your army depending on your choices.

Flayn joins your house at the start of Chapter 7: Battle of the Eagle and Lion. She will leave if you go with Edelgard's plan in the Black Eagles route.

Seteth will join your army at the start of Part 2 in every route except for Crimson Flower.

Manuela can be recruited into your army by Chapter 8: The Remire Calamity.

Hanneman can be recruited into your army by Chapter 8: The Remire Calamity.

Shamir can be recruited at the start of Chapter 7: Battle of The Eagle and Lion.

Cyril can be recruited at the start of Chapter 7: Battle of the Eagle and Lion. He will leave if you go with Edelgard's plan in the Black Eagles route.

Gilbert automatically joins your party in Chapter 13: Hunting at Daybreak of the Blue Lions route. There is no other way to recruit Gilbert in Part 1 or in any other route.

These characters can be recruited when you play the Cindered Shadows side story DLC, available through the Expansion Pass.

Yuri can be recruited after completing Chapter 6: Return to Me.

Constance can be recruited after completing Chapter 2: What Lies Beneath.

Balthus can be recruited after completing Chapter 4: Danger in the Dark.

Hapi can be recruited after completing Chapter 5: Betrayal.

Register as a member and get all the information you want. (It's free!)
Login
Opinions about an article or post go here.
Opinions about an article or post
We at Game8 thank you for your support.
In order for us to make the best articles possible, share your corrections, opinions, and thoughts about "Recruitment Guide | Can You Recruit Everyone?" with us!
When reporting a problem, please be as specific as possible in providing details such as what conditions the problem occurred under and what kind of effects it had.