Should You Do Side Quests? | Fire Emblem: Three Houses (FE3H)

This guide will walk you through the types of side quests in Fire Emblem: Three Houses (FE3H), and also explain whether or not you should do them, and which side quests are worth doing.

Types of Side Quests 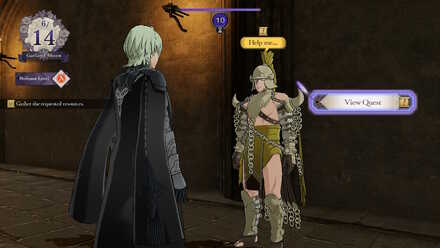 Side quests are any quests that are not part of the main story line. You are not required to do them, and you can finish the entire game without doing any of them. You mostly find them by talking with characters who have an exclamation (!) icon above them while Exploring the monastery.

They come in three types.

Monastery quests are quests that simply ask you to pick up something, give something, or interact with someone and return to the quest giver, all within the monastery. You can do them in the same exploration phase you accept the quest in. Using the map to warp to specific locations marked on the map will make these go by quicker.

Battle quests are quests you accept from someone in the monastery that can only be accomplished by doing a specific battle in your next free day.

Paralogues are special side quests that involve one or two of your units. To learn more about paralogues, check out our guide down below!
Paralogues

Should You Do Side Quests?

The answer varies, depending on whether you are playing New Game Plus or whether you are short on battalions or items. More often than not, on your first playthrough, aim to do all the quests if you don't mind the extra time it takes.

Which Monastery Quests Should You Do?

If you're not in need of resources, or you are playing New Game+, there is no need to do them except for the special quests. While they are easy and quick, you can skip them because the rewards can be found elsewhere. If you're playing New Game+, you have alternate routes to get as many rewards without all the grinding.

There are special quests that unlock core features of the game.

Given by Flayn in Chapter 1: Three Houses, this quest unlocks the ability to fish during exploration.

Dedue's quest in Chapter 1: Three Houses gives you access to the Greenhouse after completing it.

Doing this quest in Chapter 1: Three Houses will allow you to Share A Meal with students during exploration.

Helping the chef acquire cookbooks from the library in Chapter 2: Familiar Scenery will allow you to Cook A Meal for bonuses to your units that month.

A Passion for Music

Doing this quest for Jeralt in Chapter 3: Mutiny in the Mist will allow you to return lost items found around the monastery.

Learning from the Best

Completing this quest in Chapter 3: Mutiny in the Mist will unlock Faculty Training.

This quest from Chapter 3: Mutiny in the Mist unlocks the Advice Box in the Cathedral.

Ferdinand's quest in Chapter 4: The Goddess' Rite of Rebirth allows you to invite students with Tea Time.

Tending to The Saints

Which Battle Quests Should You Do? 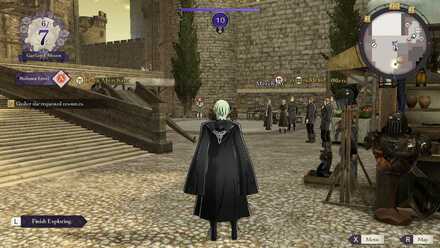 If you're playing on New Game+, only do merchant quests. Most of these battles give some rewards, along with a battalion. If you're playing New Game+ and you've done them before, you'll already have the battalions so completing them is somewhat redundant. However, there are certain quests that unlock special merchants that sell unique items.

Found in Chapter 5: Tower of Black Winds, this quest unlocks the Southern and Eastern Merchants in the marketplace, accessible only through exploration.

This quest in Chapter 15 of each path will give you access to Anna's Secret Shop in the marketplace, only accessible through exploration.

Doing this quest in Chapter 16 of each path will have the Dark Merchant set up shop in the marketplace, only accessible through exploration.

Which Paralogue Quests Should You Do?

Complete Paralogues while they are available, all of the time. All Paralogues reward you with strong items or Hero's Relics, and are almost always worth it. To learn more about paralogues, their rewards, and how to beat them, check out our guide on paralogues down below!
Paralogues

Register as a member and get all the information you want. (It's free!)
Login
Opinions about an article or post go here.
Opinions about an article or post
We at Game8 thank you for your support.
In order for us to make the best articles possible, share your corrections, opinions, and thoughts about "Should You Do Side Quests?" with us!
When reporting a problem, please be as specific as possible in providing details such as what conditions the problem occurred under and what kind of effects it had.