This is a guide to using Linked Attacks in Fire Emblem: Three Houses. Read on to find out about how Linked Attacks work, and how to use and maximize them!

What Are Linked Attacks?

Linked Attacks are attacks that occur when a character attacks an enemy with one or more allied units in range of the same enemy.

How Do Linked Attacks Work?

When a unit is selecting a enemy to attack, there will be up to three additional portraits of allies within attacking range of the enemy, connected to the main unit's portrait with a blue line. This means that they are all available for a Linked Attack. 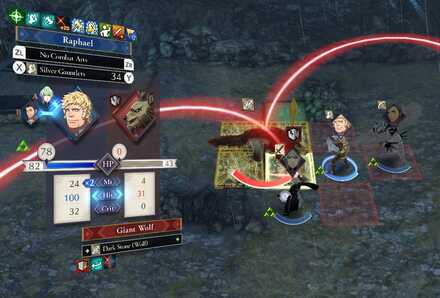 Note how Claude is not adjacent to the enemy, but is under linked attack because he weilds a bow.

Ally must be within attacking range of their current weapon

Linked attacks activate when other characters are in attack range of the same enemy with their current weapon. That means melee units have to be adjacent to the enemy, but archers and mages can be a few spaces away, as long as the enemy is within their attack range.

The Hit and Avo bonus stacks per ally, so if one ally gives +3 to Hit and Avo, three would give +9.

Why Can't I See Both Attack Animations in Linked Attacks?

Linked Attacks do not show all units atttacking, they merely give bonuses to the main attacking unit.

If you want to see two units attack during an animation, use Adjutants instead.

Register as a member and get all the information you want. (It's free!)
Login
Opinions about an article or post go here.
Opinions about an article or post
We at Game8 thank you for your support.
In order for us to make the best articles possible, share your corrections, opinions, and thoughts about "How Do Linked Attacks Work?" with us!
When reporting a problem, please be as specific as possible in providing details such as what conditions the problem occurred under and what kind of effects it had.