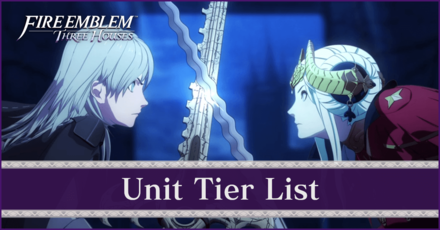 This tier list will show who are the best units in Fire Emblem Three Houses (FE3H). Here we will rank each character and list their advantages and disadvantages over other units.

This tier list groups all characters and ranks them all, with S being the highest and C being the lowest.

Units that can do a general role better than the other units that have the same role will easily push them a tier higher and push the others lower. This is the case for units such as Catherine and Felix.

Abilities are often looked at first in determining the strengths of a unit, but some units just have good stat growths that synergize with their playstyle. Units such as Ashe and Lysithea fit this category.

Register as a member and get all the information you want. (It's free!)
Login
Opinions about an article or post go here.
Opinions about an article or post
We at Game8 thank you for your support.
In order for us to make the best articles possible, share your corrections, opinions, and thoughts about "Unit Tier List" with us!
When reporting a problem, please be as specific as possible in providing details such as what conditions the problem occurred under and what kind of effects it had.