How to Use Auto Battle | Fire Emblem: Three Houses (FE3H)

What is Auto Battle?

Automatic Commands With an Objective

Auto Battle is a feature in fire emblem made to make battles go by with less effort. Auto Battle issues commands to your unit on a turn based basis. This means that the moves your units make are just the same commands that you the player can issue to them albeit, in an automatic manner.

How to Use Auto Battle 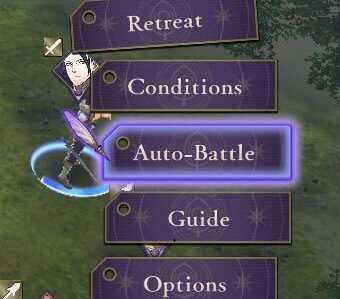 The Auto Battle feature can be found in the battle menu. Select the feature here to begin. 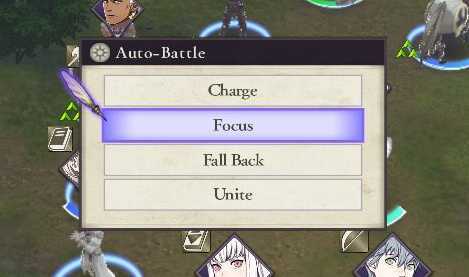 The Auto Battle feature has 4 options to choose from. This allows you to control your units to a certain degree.

Charge is your all out command. Your units will seek out enemies and use all their might to defeat them. This makes all of your units offensive, and can often lead to support units jumping to their death.

Focus is a command that makes your units do what their class needs them to do. Healers would focus on healing, while damage dealers would go out there and deal damage to enemies.

Fall back is the command you need to issue when things aren't going in your favor. Fall Back makes all of your units gain as much distance as possible from enemies.

The Unite Command makes all your units head toward Byleth's position.

Should You Use Auto Battle?

Not a useful feature

The Auto Battle feature can be used to some extent to produce some result but all actions in the game tend to affect future battles. By letting an AI do your work, you get a lot of unknown variables after the battle.

Do your weapons still have enough durability after your units expended it all on combat arts? Is issuing this command safe? Overall, it is better to issue individual commands to get the most out of all your turns.

That said, using auto battle when there are no enemies around and you just want to make all of your units move forward without having to select them one by one is totally fine. When such a situation arises, you might be waiting for a unit with low mobility to catch up to the party, and this feature can speed that up.

Okay to use on Casual Mode

While we wouldn't suggest relying on auto battle, especially in the higher difficulty maps, you can use it on easier maps if you are playing on casual mode and you have weapons you don't mind exhausting the durability on. If you are playing on Normal - Casual, and you mainly just want to enjoy the story, you can try auto battle to get through side quests that you mainly only care about beating for completion sake, although you may find it difficult if you units are underleveled!

Register as a member and get all the information you want. (It's free!)
Login
Opinions about an article or post go here.
Opinions about an article or post
We at Game8 thank you for your support.
In order for us to make the best articles possible, share your corrections, opinions, and thoughts about "How to Use Auto Battle" with us!
When reporting a problem, please be as specific as possible in providing details such as what conditions the problem occurred under and what kind of effects it had.