What is the White Heron Cup?

The white heron cup is an event that happens in chapter 9. The unit that wins the competition is the unit with the highest charm. The winner also receives the ability Skill Sword Avo +20, the Combat Art Sword Dance, as well as the unique class Dancer.

How to Win the White Heron Cup

Must Have a High Charm

The chosen candidate must have a high charm stat (at least 13 or more) to win the competition. 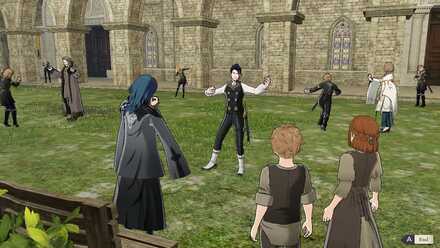 Just roping Felix into some mess.


Talking to your Candidate can make you initiate a dance practice. Make sure to do this as this event, will permanently increase the participant's charm stat by 5.

There is a clear difference between some mage units (namely Lysithea), so making other mages on your team into a dancer can give them more options than just hitting enemies with a magic attack that barely deals half the enemy's HP.

Support Units will gain a more offensive support move when equipped with the dancer class. This pushes your support character more into a super supporter role.

Another way to abuse the competition is to just take the Sword Avoid ability for sword users. This makes your hard to hit unit even harder to hit.

Note that this list is a personal suggestion from the game8 team.

Petra is a unit that is often pushed into the assassin role. She has an insane speed stat and turning her to an assassin makes her avoid stat even higher. Now partner that with the Sword AVO +20 and you have an unhittable killing machine.

Flayn is one of the best support characters in the game with the highest healing value in her heal spells. Turning her to a Dancer gives her a utility move so she can go into offense now and then.

Lysithea can make use of the dancer class due to it still being able to cast magic. One special trait of the Dancer class is its move stat being high. This gives Lysithea great accessibility to enemy units allowing her to kill an enemy every turn.

Marianne is a healer that gains offensive geared spells from her faith skill. Turning her to a Dancer allows her to fully use her sword skills like Soul Blade while still being able to support allies with heals and additional turns.

Register as a member and get all the information you want. (It's free!)
Login
Opinions about an article or post go here.
Opinions about an article or post
We at Game8 thank you for your support.
In order for us to make the best articles possible, share your corrections, opinions, and thoughts about "White Heron Cup Guide: Best Unit for Dancer" with us!
When reporting a problem, please be as specific as possible in providing details such as what conditions the problem occurred under and what kind of effects it had.