Hammer of Gravity is a Unique Melee Weapon in the game Minecraft Dungeons. Learn about the Stats and Effects of Hammer of Gravity, what the Gravity effect does, and what Missions it appears as a Gear Drop!

Hammer of Gravity Stats and Effects

“A hammer, embedded with a crystal that harnesses the power of gravity, that is incredibly powerful.”

A powerful weapon. Its great damage and area of effect combined with its Gravity effect makes it a destructive weapon. You can defeat a group just by continiously attacking in one spot.

How to Get Hammer of Gravity

Missions Containing the Hammer of Gravity

The Hammer of Gravity can appear as a Gear Drop in the following Missions.

On using the Hammer of Gravity, you may notice an Effect labeled Gravity on the left side of the screen. This Effect is the result of the “Pulls in enemies” ability written on the weapon's description, and is the same as the Gravity Enchantment. 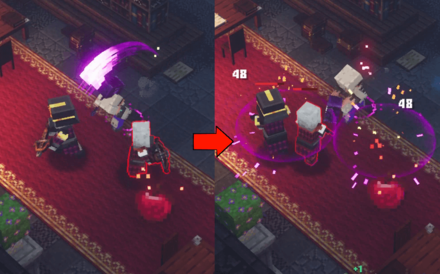 When you use the Hammer of Gravity on an enemy, other enemies in the vicinity will be pulled in by the blow. It seems that an enemy must be hit directly by the hammer, causing another enemy to be pulled in close to the struck foe.

Although the “Gravity” label still appears on the screen, it won't have any effect on a single enemy. In addition, even if multiple enemies are nearby, they won't be affected by Gravity unless at least one enemy is directly hit by the Hammer.

Register as a member and get all the information you want. (It's free!)
Login
Opinions about an article or post go here.
Opinions about an article or post
We at Game8 thank you for your support.
In order for us to make the best articles possible, share your corrections, opinions, and thoughts about "Hammer of Gravity Stats, Effects and Location" with us!
When reporting a problem, please be as specific as possible in providing details such as what conditions the problem occurred under and what kind of effects it had.