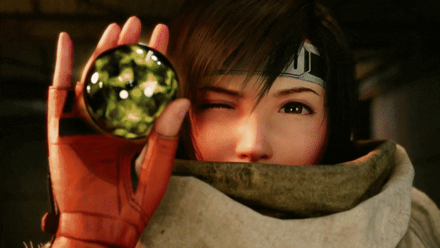 In the english version of the game, Yuffie is played by Suzie Yeung, a voice actress that has done only a few games, but has voiced in a lot of big anime. Final Fantasy 7 Remake will be her largest video game role yet! Another video game role she is known for is being the voice actress for Eula in Genshin Impact. For Anime she has voiced characters in, Attack on Titan, Demon Slayer, Jujutsu Keisen, and many more!

How Old is Yuffie?

Yuffie was confirmed to be 16 years old in the lore of the original game. Assuming no major changes in the timeline have occurred, we can assume that Yuffie has stayed the same age on into the Remake! 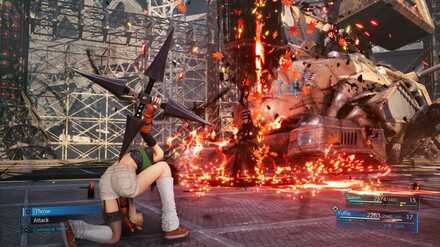 Yuffie is unique from other characters as she does not specialize in a single range, but can do both close-quarters and long-range combat. All of Yuffie's melee attacks and her shuriken deal physical damage, while her ranged Ninjutsu attacks deal magic damage.

Yuffie can execute a variety of physical attacks with □. After throwing her shuriken, she can also jump to retrieve it which can be used repeatedly to attack multiple enemies in a row or raise the enemy's Stagger.

Pressing △ will throw your shuriken for a ranged attack. The shuriken will not return automatically, but will instead stay pierced and continue dealing damage upon striking the enemy.

Throwing your shuriken will also change your □ into ranged ninjutsu attacks, which deal magic instead of physical damage. 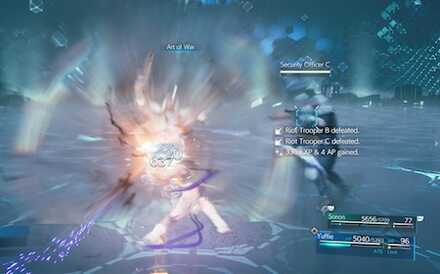 A multi-hit attack which powers up subsequent attacks, Art of War is a great opener when the enemy becomes vulnerable, such as when they are Pressured or Staggered. 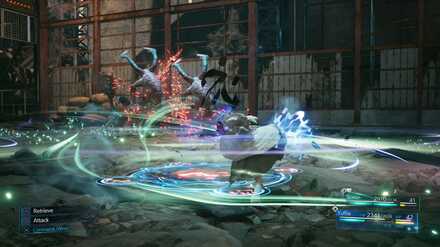 Although not explained in the description, Windstorm is an ability with two separate effects. Its standard result is an area-of-effect attack which deals minor Wind damage to all enemies in the area. However, when used while the shuriken is stuck to an enemy, Windstorm will deal heavy Wind damage to that enemy and the area surrounding them. The latter case can be used to great effect in both hitting single enemies hard and in the Shinra Box Buster minigame. 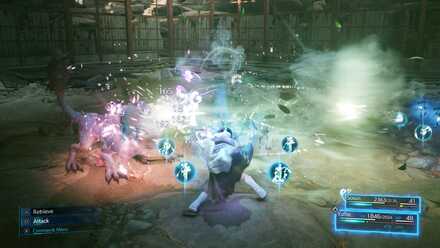 Yuffie's Ninjutsu attacks by default are non-elemental damage, but this can be changed by using her Elemental Ninjutsu Ability! She can use fire, ice, wind, or lightning ninjutsu, which will change her basic attack's properties into the element chosen. 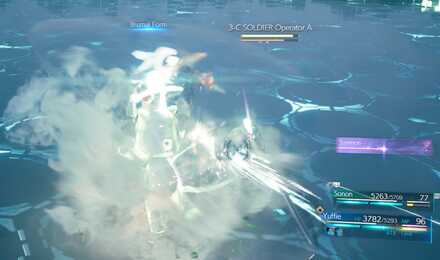 Yuffie uses a cloud of smoke in the shape of a Moogle to quickly dodge an attack. It can be used to automatically dodge fast attacks which the standard roll dodge cannot. On top of that, ATB is gained when it is used to successfully dodge, allowing it to be used repeatedly or to combo into counterattacks. 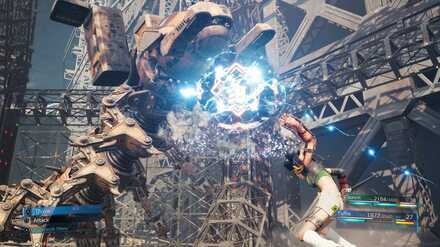 Banishment deals more damage the more ATB commands have been executed during the battle. Its power can be increased up to three levels, dealing more damage on every level. It can also be changed to deal damage of a specific element when Elemental Ninjutsu has been used. Wait until later in the battle after many ATB commands have been used, then fire off Banishment III for big damage! 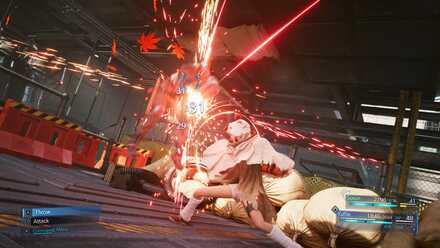 Yuffie unleashes a flurry of attacks that deal massive damage to a single target! 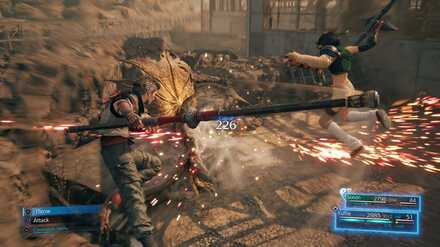 When L2 is pressed, Sonon will warp to Yuffie's location and they will become Synergized. When Synergized, Sonon will follow Yuffie's lead, targeting the same enemies and switching between physical attacks and Ninjutsu to match Yuffie.

Yuffie also gains access to new Abilities when Synergized. If Sonon's Synergized Limit Breaks Weapon Upgrade for the Marshalist's Staff is unlocked, they are also able to perform a unique limit break together.

However, staying in Synergy mode will cause ATB to accumulate more slowly, so balance between the two modes is necessary.

Synergy Guide: How to Synergize Yuffie and Sonon

This attack focuses on hitting a single opponent repeatedly, finishing with a smackdown that can deal over 5000 damage. Other enemies in close range can be caught in the crossfire as well. Like traditional Art of War, it also increases the damage of follow-up attacks.

Synergized Windstorm is a powerful area of effect Wind-elemental attack which can juggle weak enemies and rack up Stagger. Unlike the standard Windstorm, there is only one effect, and throwing a shuriken at an enemy in advance will not change its result.

How to Use Yuffie

When Yuffie and Sonon are synergized, Sonon will stay nearby Yuffie and attack together with her, which is useful for when you want to focus down the same enemy. Sonon will also match Yuffie's attacks in this mode, so when you want to hit an enemy hard with Magic attacks, use Synergy to make both characters fire away wtih Ninjutsu.

Yuffie and Sonon gain ATB more slowly when Synergized, so if you're only Synergizing to use an Ability, it's best to switch it on right before using the Synergized Ability, then switch it back off right after.

Throw + Ninjutsu to attack at a distance

Ninjutsu are Yuffie's key ranged attacks, as they can be used repeatedly to hit enemies who are dangerous at close range.

The Retrieve command will force Yuffie to come in close to the enemy, so when keeping strictly to ranged battle, wait for the shuriken to return automatically, then throw it again to continue racking up chip damage and spamming Ninjutsu.

An Optional Party Member in the Original Game 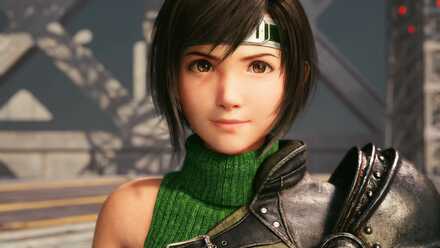 In the original game, Yuffie was just an optional party member that could be missed but did not affect the main story. She was a materia hunter who joined the party for her own gains, but ended up becoming close with the party and becoming a valuable trustworthy member. This time in FF7 Remake Intergrade, Yuffie gets her own time in the spotlight and will be the main controllable character. Bringing back her confident spunk, playfulness, and giant shuriken to the FF7 Remake! 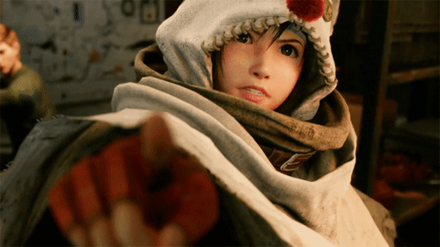 Yuffie is a member of the Special Forces for the Wutai New Government. She did not appear in the main game of FF7R and appears after Cloud and friends leave Midgar in the original game. In INTERmission, Yuffie is given a mission, and with the help of Avalanche members, she sneaks into Midgar. Her mission seems to involve Shinra and takes place around the main game before the Sector 7 plate is dropped. Because her mission takes place during the same time as the main game, we can assume that Yuffie might not meet the main cast during her chapter.

Register as a member and get all the information you want. (It's free!)
Login
Opinions about an article or post go here.
Opinions about an article or post
We at Game8 thank you for your support.
In order for us to make the best articles possible, share your corrections, opinions, and thoughts about "Yuffie Kisaragi Weapons, Abilities and Voice Actor | Yuffie Best Build" with us!
When reporting a problem, please be as specific as possible in providing details such as what conditions the problem occurred under and what kind of effects it had.