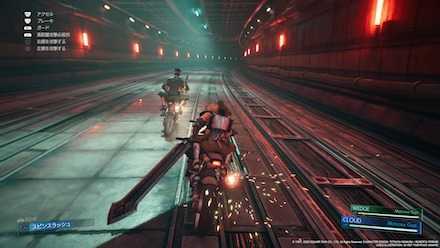 This is a guide to the Bike Minigame in the game Final Fantasy 7 Remake (FF7R). Learn how to win the minigame in Chapter 4 and Chapter 18, beat Roche and Motor Ball, and win the Biker Boy trophy and a kiss from Jessie.

Played in Chapter 4 and Chapter 18 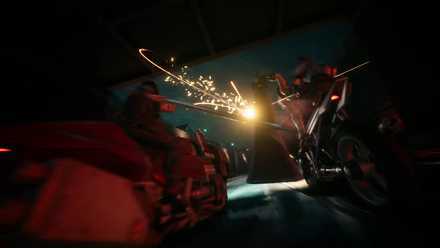 This guide goes over how to handle the enemies and defeat the bosses in both sections. Unlike other minigames, there's no option to replay them once they have ended, so be sure to make a save file before the start if you'd like to replay these games. Otherwise, after completing the game, you can select either of these chapters from Chapter Select to play them again.

Survive with 80% HP or more for a Kiss from Jessie 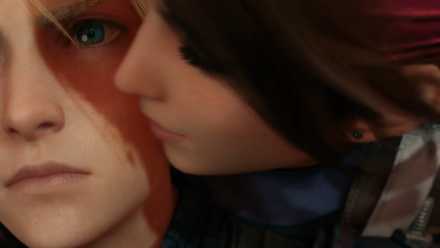 If Cloud finishes the Bike minigame in Chapter 4, and defeats Roche with over 80% of his HP remaining, he'll receive a kiss on the cheek from Jessie. If you prefer Jessie to Tifa or Aerith, and are dying to see Cloud's reaction, then rev your engine and get in gear, because this is no easy task!

Oh yeah, and you'll get the Biker Boy Trophy out of it, too.

Use Sharp Gust, your long-range attack

When your Unique Ability gauge in the bottom-left of the screen is filled, you'll be able to hold L1 to change to Sharp Gust. While holding L1, press the Triangle button to unleash a long-range attack at an enemy ahead of you. Aside from Elite Security Officers, you'll be able to take down an enemy in one hit with this attack.

When you're hugging the sides of the road, it will make a scraping noise, but Cloud actually won't take any damage. This position can be advantageous for avoiding attacks, so stay close to the side when traps appear on the road.

Use Ramps to Instantly Charge your Ability Gauge (Chapter 4 Only) 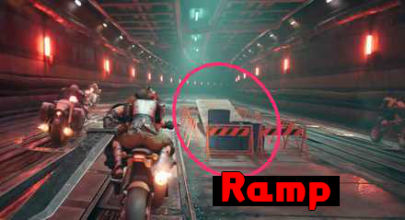 In the tunnel, you'll find ramps which you can go up to instantly charge your Unique Ability's gauge to the maximum level. Since you can rely on these to get a consistent charge, use Spinning Slash and Sharp Gust regularly, so your charges won't go to waste.

Chapter 4: How to Beat Roche on the Bike

Attack Roche from right outside of his range 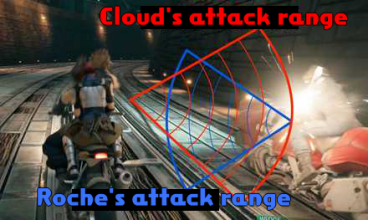 When you fight Roche up close, try to hit him where your attacks will just barely reach. Roche's range is slightly shorter than Cloud's, so if you attack him at the edge of your own range, Roche's attacks won't be able to hit Cloud, and you can smack him around without any payback.

Focus on Evasion when Roche is ahead 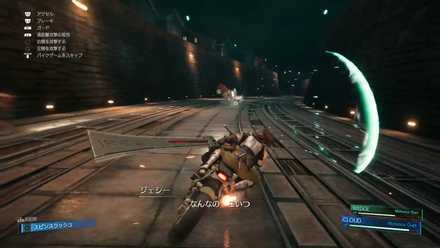 When Roche is ahead of you, he'll continue to launch attacks back at you, so focus on avoiding these. If you take too many hits, your speed will decrease and you won't be able to catch up to Roche, so instead of trying to force an attack, bide your time and dodge his attacks until you can catch up. 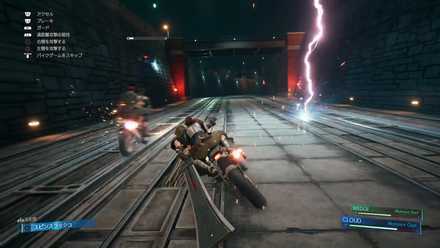 Hit him with Unique Abilities

Roche has a lot of HP, so it won't be enough to just take him down with regular attacks. As you're riding, wait for yor Ability Gauge to fill up, then unleash your attacks on Roche as soon as they're ready. When riding alongside Roche, you can use Spinning Slash; otherwise, hold L1 and press Triangle to unleash Sharp Gust.

Roche will be back later on in Chapter 4 for a battle on foot. Learn how to handle him when he's not holding back!

How to Beat Roche

Chapter 18: How to Beat Motor Ball

Knock out the wheels one by one

In order to deal damage to Motor Ball, you'll first need to defeat each of its Wheels. The Wheels which still need to be knocked out are easily recognizable by their shining blue lights – once you've already knocked out a wheel, it will turn black. At this point, continuing to attack a broken Wheel will have no effect on Motor Ball, so head for the next Wheel right away.

After you've knocked out all three Wheels on one side, Motor Ball will be kind enough to flip itself around and allow you to attack other three Wheels, so there's no need to circle around to hit all six Wheels.

Once you've knocked out all six of its wheels, Motor Ball will automatically be Staggered, so save up your Unique Ability to hit him hard with Spinning Slash!

Stagger Bonus Not Counted for Trophy or Enemy Intel

How to Get Stagger Attack Bonus to 200%

Brake when it prepares an attack 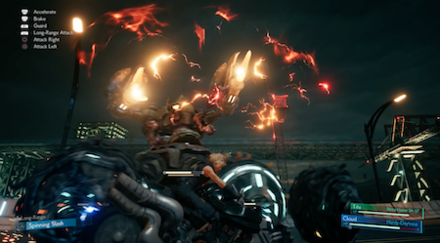 Most of Motor Ball's killer moves are highly telegraphed. Although it doesn't show Ability names like typical enemies, once you've gotten used to its patterns, you'll be able to take down Motor Ball without too much damage.

Don't get too far behind 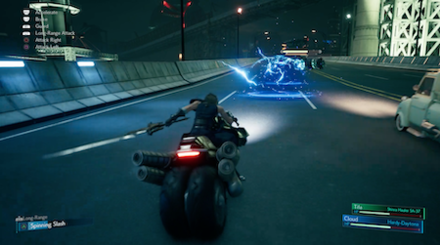 If you fall too far behind Motor Ball to try to take a breather, you won't get one – Motor Ball will start throwing electric bombs back at you which are difficult to avoid and can cost you unnnecessary HP. Since you won't be able to attack Motor Ball easily from a distance, there's no reason to put yourself in this position, so try to stay close behind Motor Ball for the duration of the fight.

When behind, hug the sides

When you're hugging the sides of the road, it will make a scraping noise, but Cloud actually won't take any damage. This position will help you avoid damage when Motor Ball starts throwing its Electric Bombs.

How to Defeat the Other Enemies 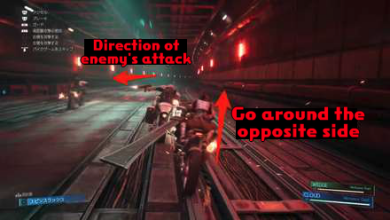 Security Officers will mostly attack by moving ahead and shooting back at you. Move to the opposite side of where they aim their gun, then accelerate next to them and slash to take them out. 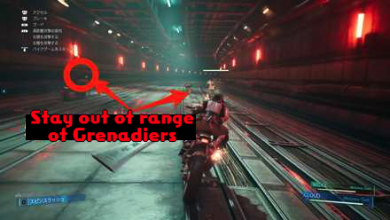 Grenadiers can throw grenades to a range about a body length away from themselves. Even after the grenade has exploded, you'll take damage for going through the blast, so keep out of the range of their grenades and wait for a chance to take them out.

Slug-Rays will mostly attack by creating electric fields around themselves which will damage you if you touch them, and by aiming at Cloud and firing. Stay far out of range when they create an electric field, and when the target appears over Cloud, swerve left or right to avoid the coming attack. 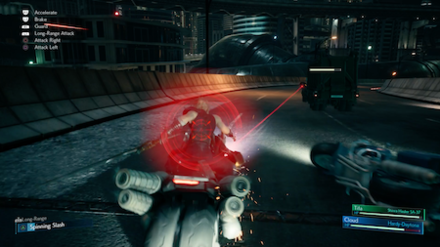 The Truck appears before the Motor Ball fight in Chapter 18. Like the Slug-Rays, it will show a target before it fires, so ride on the opposite side of the truck when the target appears and go around to damage it.

A M.O.T.H. Unit will appear after you defeat the Truck. It will use a spinning attack to hit you in close range, so be sure to drive in the opposite lane to avoid its attack.

Use Guard when it Spins

If you get hit by M.O.T.H. Unit's spinning attack, you'll take heavy damage, so be sure to guard when it comes at you. When you've got a chance to hit it, use Spinning Slash to wear down its high HP.

How to Get the Biker Boy Trophy

In order to get the Biker Boy Trophy, you'll need to survive the Bike Minigame in Chapter 8 with 80% or more HP remaining. With only 6.6% of players currently owning this trophy, this one is worth it just for the bragging rights. You'll also get to watch a heart-melting kiss scene!

See more comments (3 Comments)
Opinions about an article or post go here.
Opinions about an article or post
We at Game8 thank you for your support.
In order for us to make the best articles possible, share your corrections, opinions, and thoughts about "How to Win the Bike Minigame | How to Get the Biker Boy Trophy" with us!
When reporting a problem, please be as specific as possible in providing details such as what conditions the problem occurred under and what kind of effects it had.