This is a guide to winning the Darts Minigame in the game Final Fantasy 7 Remake (FF7R). Learn how to throw darts perfectly to beat Wedge's high score, earn the Luck Up Materia as a reward, and win the Heavenly Dart Player trophy.

How to Play Darts

The Darts Minigame is unlocked during Chapter 3, when Cloud is alone in Seventh Heaven while waiting for Tifa and the other AVALANCHE members to finish planning their next mission. Go to the dartboard near the entrance to play.
Chapter 3: Home Sweet Slum Story Guide & Walkthrough

Your reward for the Darts Minigame is the Luck Up Materia, obtained when beating Wedge's 1st place record. However, you won't receive the Materia until Wedge gives it to you directly in the second half of Chapter 4, so keep this in mind if you're jumping around to different chapters using the Chapter Select feature.

How to Win at Darts

Move your Control Stick slightly to adjust the cursor

When aiming your cursor during a game of Darts, be sure to move your control stick ever so slightly to adjust. If you move the control stick too far, the cursor will go flying off in another directly, and you'll lose the progress you made with aiming. Make only careful adjustments when aiming your throw!

The pointer can be hard to control, so if it's easier for you, try holding the controller stick with your thumb and index finger, like an arcade stick or crane game, which will allow you to move with more precision.

Throw when the circle shrinks to be within the cursor 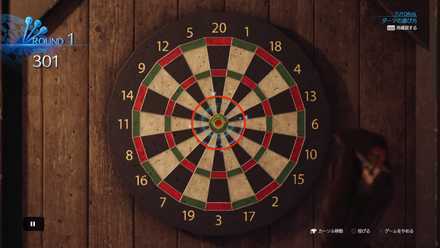 As long as the outer circle is within the red circle pictured in the screenshot above, you should still be able to get a Great throw, which will not vary too far from your cursor's location. 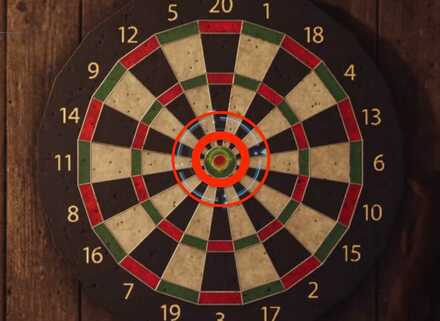 There's also a gauge within the circle which indicates your time limit until the dart will be automatically thrown. Make sure to throw the dart the first or second time the circle shrinks to be within the cursor, or you'll run out of time and miss your mark.

Aim for a Bullseye 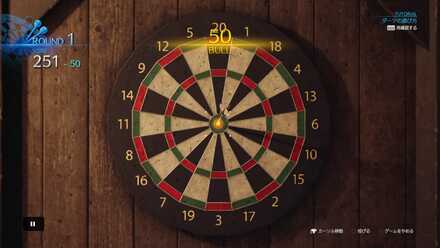 Winning at Darts is not as simple as getting as many points as possible – you start off with a score of 301, and your points will be decreased for that total. To win, you need to aim for a secore of exactly 0. The best way to accomplish this is to aim for five bullseyes for 50 x 5 = 250 points, and hit the 17 triangle's triple area for 51 points, achieving a total of the needed 301 points.

Alternately, you can aim to hit the 20 triangle's triple area five times, yielding 60 x 5 = 300 points. This will give you a bit more leeway if you miss once, as you'll have made up for some of the missing points with the other throws.

Finish the game in 6 or 7 throws 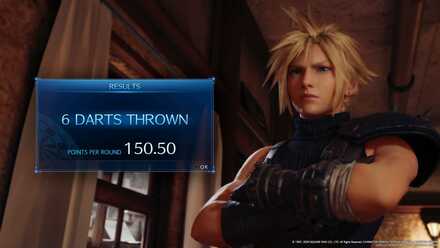 As Wedge achieved his first place ranking with a total of 8 throws, you'll need to win with a total of 6 or 7 throws to beat his score. Follow the advice above and practice until you can achieve this feat.

Check out our Japanese wiki's astounding video getting exactly 301 points in 6 throws!

How to Get the Heavenly Dart Player Trophy

Once you've gotten the first place record on the dartboard in Seventh Heaven, you'll receive this trophy.

In order for us to make the best articles possible, share your corrections, opinions, and thoughts about 「How to Win at Darts | How to Get the Heavenly Dart Player Trophy | FF7 Remake」 with us!