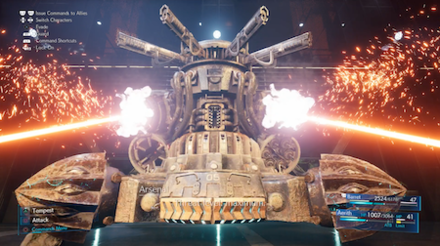 This is a guide to beating the Boss The Arsenal in the game Final Fantasy 7 Remake (FF7R). This article explains The Arsenal's attack patterns, weaknesses, and tips and strategies for defeating them on both Normal and Hard Mode.

The Arsenal Stats and Information

An autonomous mobile weapons platform manufactured by Shinra's Advanced Weaponry Division. It is armed with an extremely powerful cannon on its right arm and rotary cannons on its left. Equipped with cutting-edge combat AI, it calculates the most efficient method of annihilating its targets based on the situation.

While it runs an elemental defense protocol, attacks of those element have only a slight effect on the stagger gauge. Its stagger gauge is not affected at all when its barrier is online.

No Enemy Skills can be learned from The Arsenal.

The Arsenal Abilities and Attack Patterns

You're going to want to be on the offensive for most of this battle, so Barret is your best choice to keep the damage coming with his fast attack rate. Equip Barret with an Elemental Materia + Fire, Ice, Thunder, or Wind to hit its weak points.

Aerith's no slouch either – if you've got Magic at Level 3, like Firaga or Thundaga, switch to Aerith every time her ATB Gauge fills to use one of these attacks and deal heavy damage. If you want to nuke The Arsenal harder, cast Arcane Ward to Aerith first before casting your highest damaging elemental spell.

When The Arsenal uses a Defense Protocol and one of your members starts dealing reduced damage, switch characters right away and start using a different element to keep the damage coming.

In Phase 1, Take Out the Drones 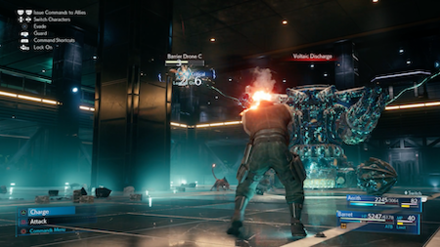 In the first Phase of the battle, you won't be able to attack The Arsenal directly. Take out its Drones first to release the Barrier and continue to Phase 2.

Tips & Strategies for Beating The Arsenal 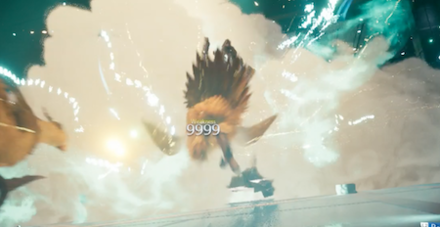 The Chocobo & Moogle Materia's final attack, Stampede, has a Wind element and was able to deal a whopping 9999 damage.

Unlike many other bosses with no weak element, The Arsenal itself is weak to all four elements. Although you won't be able to attack it directly until Phase 2, be sure to equip Barret with an Elemental Materia plus one of the offensive Magic Materia, and use Aerith when her ATB Gauge fills to keep the offensive Magic flowing.

Keep in mind that The Arsenal can use Damage Protocols to protect itself from certain elements. It can only do this for one element at a time, so simply switch to a different Spell, or switch characters to the one which can continue to do damage to its remaining weak points.

Hide Behind the Pillars 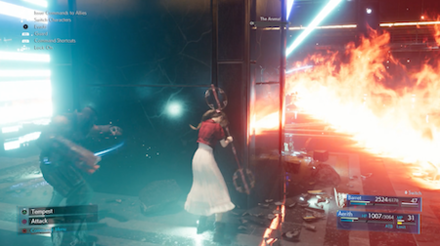 If this attack, Cry Havoc, hit one of your party members, they'll take 9999 damage and be instantly KO'd.

The pillars will be your rock-solid support for this battle. Make sure that you're taking cover behind pillars for the majority of the battle, especially during Phase 1 of the fight, as almost all of The Arsenal's attacks can be blocked completely. After each attack has ended, simply peek out from behind the pillar to unleash a volley of bullets or an offensive Spell. As both of your characters are ranged attackers, there's no need to get particularly close.

Watch out for its attack Homing Lasers, which can hit your party even from behind the pillars; even still, you'll be far better off than standing out in the open. Its other charged laser attack has a long pre-attack animation, and you should be able to dodge out of the way easily.

As the battle continues, The Arsenal will destroy the pillars one by one, but only at the very end of the battle will you be left with no pillars to protect you.

Whenever the Arsenal brings up its right arm to charge Primary Fire or charges up Homing Laser, a weak point appears. Hit the Main or Laser Cannons with your strongest lightning magic or Barret's Focused Shot to stop the attack and leave the Arsenal open for easier staggering. 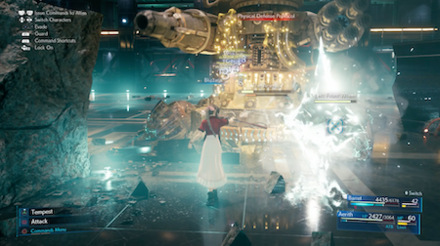 The Arsenal using Physical Defense Protocol, changing its color to Yellow. This grants it Resistance to Physical damage.

The Arsenal can only use one Defense Protocol at a time. So when its Defense Protocol matches the element of your Weapon or Magic, switch to a different element for your attacks or to the other character to ensure that you can keep hitting for maximum damage.

Focus your Energy on The Arsenal

Instead of spreading your damage thin across the multiple targets, simply aim true at The Arsenal and keep the hurt coming.

The Arsenal may be weak to Lightning, however there are times when its weaknesses change and not having the rest of the elements at your disposal on Hard Mode can make things more difficult than they need to be. To be fully prepared for this fight, equip the remaining elemental magic materia on Aerith to cover all your bases.

See more comments (3 Comments)
Opinions about an article or post go here.
Opinions about an article or post
We at Game8 thank you for your support.
In order for us to make the best articles possible, share your corrections, opinions, and thoughts about "How to Beat The Arsenal | Boss Fight Guide (Normal & Hard)" with us!
When reporting a problem, please be as specific as possible in providing details such as what conditions the problem occurred under and what kind of effects it had.