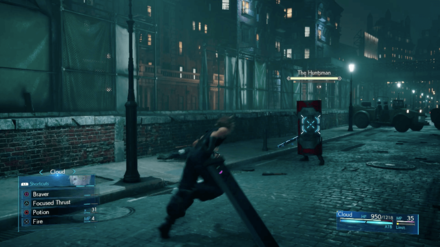 This is a guide to beating the Boss The Huntsman in the game Final Fantasy 7 Remake. This article explains Scorpion Sentinel's attack patterns, weaknesses, and tips and strategies for defeating it on both Normal and Hard mode.

The Huntsman Stats and Information

An elite trooper belonging to Shinra's Public Security Division and said to be the most dangerous of all Shinra troopers. He Serves as a unit commander in the Sector 8 town area.

His shield protects him against frontal attacks. Try using magic or attacking from the rear. Inflictinf a certain amount of damage makes him susceptible to staggering.

No Enemy Skills can be learned from The Huntsman.

How to Pressure the Huntsman

Maximize the use of Fire to exploit his weakness while countering his attacks with Punisher Mode's auto-counter. Take note that his Stun Baton is multi-hit and only its first hit will be countered by auto-counter so it is better to guard against it or just dodge it.

Tips & Strategies for Beating The Huntsman

Clear out the Other Enemies First 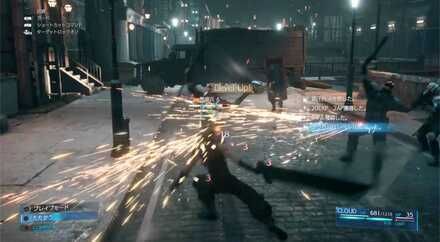 Get rid of the Grenadiers, Officers and Troopers before zeroing in on The Huntsman to make the fight even easier.

The Huntsman looks like a unit who would be used to quell riots, but his weakness to Fire would make his job pretty hard!

Hit him with Fire magic to deal large amounts of damage and stagger him at the same time. 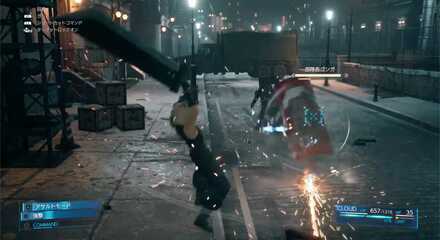 The Huntsman uses his large shield to counter and block your attacks, it's not very effective to ram at him and furiously attack.

Instead, use Punisher Mode's auto-counter feature and hold the Guard button, waiting for him to attack. When he does, Cloud will Auto-Counter and deal heavy damage.

Look Out for Stun Baton Attacks 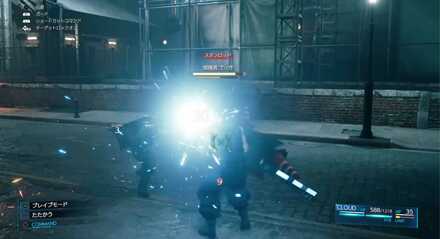 Despite his heavy looks, The Huntsman can attack quickly with his Stun Baton attacks, dealing high damage and potentially stunning Cloud, so avoid it by Guarding or Dodging. 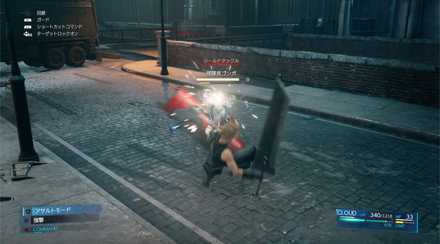 The Huntsman's Riot Shield attacks are very powerful and can stun you. It's difficult to avoid if you're nearby, so if you see a shield attack, drop back and be prepared to avoid it.

As The Hunstman and the Shinra foot soldiers that accompany him are weak to fire, it is best to use a weapon with high magic damage like the Mythril Saber. It can also provide MP and MP regen if the upgrades were unlocked.

Supreme Bracers are a good choice as armor as all the damage in the fight will be Physical Attacks. Iron Maiden is also a solid choice if you do not think you need the extra materia.

You will be using mostly Fire spells for this fight, so Circlet will provide good damage and MP to help with that. Survival Vest can help with survivability if it is a problem.

The best offensive materia for this fight is Magnify binded with Fire as The Hunstsman and every other enemy with him are weak to Fire. Having your Fire spells will make quick work of the foot soldiers.

Steadfast Block is a good materia to have as when you do not have any ATB you will need to block to avoid being overwhelmed. And First strike will allow you to immediately cast a magnified fire spell.

Chakra and Healing will make sure you survive through the whole fight while Magic Up will help further increase your Fire spell damage. 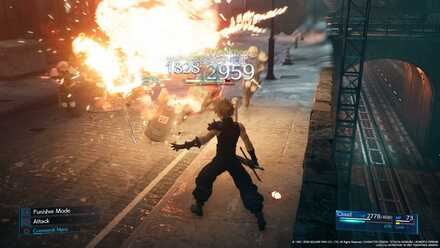 When starting the fight cast a magnified Fire spell right away to clear the first wave of foot soldiers. They will also be grouped up together, maximizing damage. Whenever you do not have any ATB hold block, as getting hit by a Burst Fire can put you into a bad situation. Do the same thing for the soldiers accompanying The Hunstsman until it becomes a 1 on 1 fight.

Use Fire Spells to Get The Hunstsman into the Pressured State 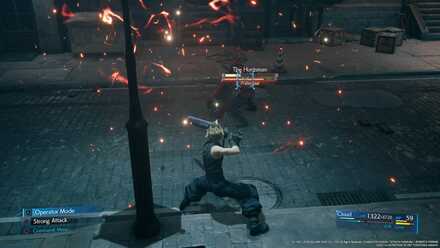 Once it becomes a 1 on 1 fight cast Fire spells to get him off balance and put him into the Pressured state. Use Focused Thrust to get him into Stagger for you to lay down the damage. Whenever you do you not have any ATB, go into Punisher mode and hold block to auto-counter.

But when you see him go for the Stun Baton it is best to roll out of the way as the follow up attacks after the first one can deal heavy damage to you.

Post (1 Comments)
Opinions about an article or post go here.
Opinions about an article or post
We at Game8 thank you for your support.
In order for us to make the best articles possible, share your corrections, opinions, and thoughts about "How to Beat The Huntsman | Boss Fight Guide (Normal & Hard Mode)" with us!
When reporting a problem, please be as specific as possible in providing details such as what conditions the problem occurred under and what kind of effects it had.