Intergrade: How to Level Up Fast and AP Farm | FF7 Remake

This is a guide to level grinding and farming EXP and AP in Final Fantasy 7 Remake Intergrade's INTERmission DLC for PS5. Get ready for Hard Mode by grinding up to the Lv. 50 max level cap, and find out the best spots and Materia to use to get EXP and AP fast!

Get Materia Ready and Get Started Early on AP 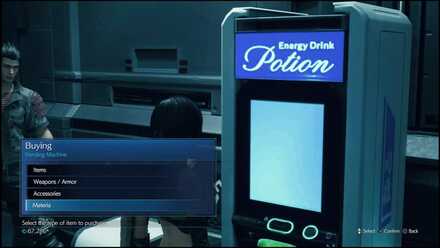 Compared to grinding EXP to reach level 50, grinding all your Materia to their max AP level is a much bigger hurdle. Players who have not focused on getting AP on their Materia during their initial Normal difficulty playthrough will have trouble finding opportunities to level up new Materia.

You'll want to go ahead and purchase at least one of every Materia in advance from Vending Machines during your initial run, and getting as much AP as possible on hard-to-level Materia like stat boosters as early as possible.

Important Materia to Level Up

Also, be sure to buy the four rare Materia from the Junk Shop in Sector 7 in Chapter 1 – these Materia can only be found here, and as only one of the four appears randomly at a time, you'll need to start a game of Fort Condor, forfeit, and return to the shop to find all available Materia. 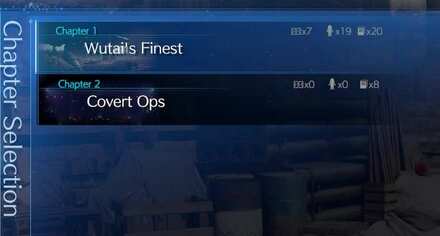 It's much easier to grind EXP and AP to the max level after a little preparation.

Get the EXP Up Materia from Shinra Box Buster 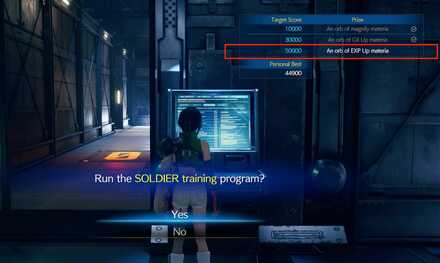 Before starting your second runthrough of the story, first visit B14F of the Shinra Building and play the Shinra Box Buster. Achieving a perfect score of 50,000 points on the SOLDIER Training difficulty will net you an EXP Up Materia, the only one in the game.

Some advanced tricks are necessary to get this score, so it's best to consult a video or guide to understand how to complete the minigame. If you're really struggling, the EXP Up Materia is not totally necessary so skip it if necessary.

How to Level Up and Farm AP Fast 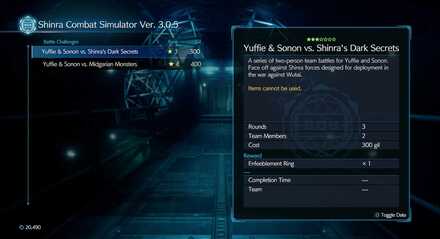 After completing the above steps, you're ready to get started. Select Chapter 2 from the Chapter Selection.

The Shinra Combat Simulator will be unlocked and accessible at the very start of the chapter, without the need to work your way through any battles. You're best off going up against Shinra's Dark Secrets, the Rank 3 battle at the very top. This fight takes less than 1 minute per battle, so as you repeat it you'll see your EXP approach level 50 in no time at all. 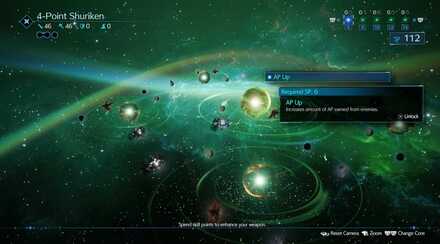 Each of Yuffie's weapons has an AP Up Weapon Upgrade which causes each enemy to give more AP than normal, meaning all Materia equipped to both Yuffie and Sonon will grow more quickly when this upgrade is unlocked. Be sure to equip it as early as possible to make sure you are getting as much as possible from each battle.

In addition, new Armor like the Ninja Armlet and Volant Armlet allow for double and triple AP growth of the equipped Materia, which can be used to pinpoint and level specific Materia easily. The Ninja Armlet should be used with the AP Up Materia found in Scarlet's Room on B13 of the Shinra Building in Chapter 2 for best results.

With both EXP Up and the AP Up Weapon Upgrade equipped, players will receive the following boosts from a single round of Shinra's Dark Secrets.

In order for us to make the best articles possible, share your corrections, opinions, and thoughts about 「Intergrade: How to Level Up Fast and AP Farm | FF7 Remake」 with us!