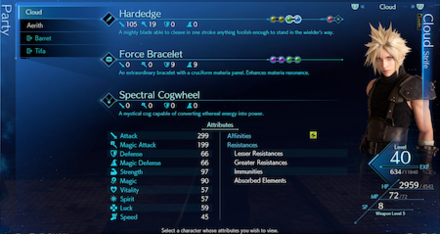 This is a ranking of all the playable characters in Final Fantasy 7 Remake (FF7R) by stat. Learn what characters are strongest in each stat, and which characters lag behind!

This chart and all following sections show all the characters' stats at Level 50. The ranking of their stats may vary slightly depending on the level.

Barret's high HP makes him far and away the best tank in the game. Further pumping up his HP with Materia like HP Up will make him even beefier.

On the other hand, Aerith's low HP makes her susceptible to quick knockouts, so it's best to control her mainly when using Magic or Abilities, as the character controlled by the player tends to take more hits from enemy attacks than the computer-controlled characters.

Aerith's high MP makes her a no-brainer for the primary spellcaster role. Play her as a black mage to deal big damage to enemies, or a white mage to serve as a healer for those on the front lines. She can also use Arcane Ward Ability to allow spells to automatically be cast twice, allowing her and others to further save MP.

Barret's low MP makes him a tough choice for a healer, but he often has no choice given his role as a ranged attacker. Save his MP for healing spells and let him do the offensive work with his gun.

Despite the variation in the characters' Strength, all of them are effective when using their basic attacks. Tifa and Barret's attacks hit faster than Cloud's, so you won't feel the gap in Strength heavily when using them.

As Aerith's basic attacks use her Magic Attack stat instead of her Attack stat, her low Strength doesn't come into play often. Feel free to use her ranged attacks to hit enemies even when she doesn't have enough ATB charge for an attack.

Aerith's high Magic stat is key because it powers up her offensive magic, her healing magic, and even her standard attack, which refer to the Magic Attack stat instead of the Attack stat.

On the other hand, Tifa and Barret's low Magic make them less effective as healers, so be sure to boost their Magic in addition to their MP when placing them in a support role.

What Does Magic Do?

Vitality affects Defense, which Barret has in spades – this further increases his effectiveness as a tank, but be warned that it won't make a difference for Magic attacks.

Aerith's low Vitality makes her further more vulnerable, so consider boosting her Vitality as well as HP when you find your healer needing too much healing herself.

What Does Vitality Do?

Spirit affects Magic Defense, which means Aerith can play a rare defensive role when faced with Magic-heavy enemies. Boost her HP and send her to handle tough Magic users like Leviathan.

On the other hand, Spirit tends to be the crack in the Barret's armor, so consider patching the hole with Armor like the Astral Cuff or allowing the computer to control him to reduce the hits he takes against Magic attacks.

Cloud and Tifa tie for the highest Luck, which affects Critical Hit and Steal rates. Be sure to place the Steal Materia on a Character with a high Luck stat, and attack more with these characters as well, maximizing your chance of yielding a Critical Hit.

Also consider using the Luck Up Materia with Cloud or Tifa to send your Critical Hit rate soaring!

What Does Luck Do?

Speed allows a character's ATB Gauge to charge faster, and Tifa is a pro at this. Together with her high Luck, she's great at using Steal, as well as using Unbridled Strength to power up her Rising Uppercut into Omnistrike, followed by Rise and Fall, to increase enemies' Stagger Damage Rate over 300%.

What Does Speed Do?

Post (0 Comments)
Opinions about an article or post go here.
Opinions about an article or post
We at Game8 thank you for your support.
In order for us to make the best articles possible, share your corrections, opinions, and thoughts about "Character Ranking by Stat" with us!
When reporting a problem, please be as specific as possible in providing details such as what conditions the problem occurred under and what kind of effects it had.