What is the Push-Up Challenge?

Where to Find the Push-Up Challenge

After encountering Kyrie near start of Chapter 14, you'll be able to head to Wall Market. Find Andrea in the same location as the Burning Thighs Side Quest in Chapter 9, in the building labeled with the “男男男” characters.

The Trainee difficulty of the Pull-Up Challenge constitutes the Wavering Heart Side Quest. You'll only need to beat Andrea, the first opponent, to finish the Side Quest.

How to Win Pull-Up Pro Difficulty 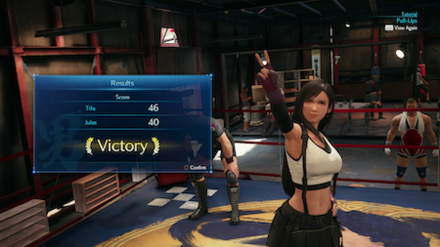 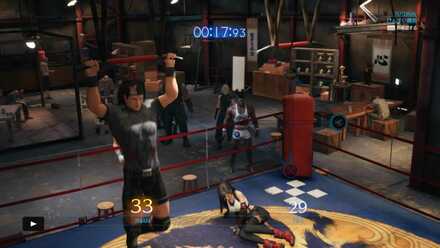 The most important thing to win the Pro Difficulty is to completely avoid mistakes. Falling off the bar will cost you approximately 10 seconds, and on top of that, your pull-up speed will be reset. It will be very hard to recover after making even making one mistake, so you'll have to aim for a flawless victory.

The background noise and music in the gym can be very distracting for many, especially when the other gym members start counting in a totally different rhythm. You can try going to settings beforehand and setting both music and voice volume to 0, so you can focus only on the sounds made when hitting the buttons. 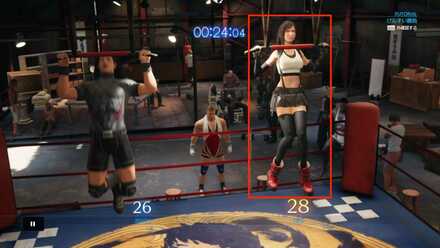 As your number of pull-ups in a row goes up, your speed will increase with it, and the button indications will disappear. This makes it highly difficult to guess when to time the button presses. The key indicator is in Tifa's movements – when Tifa stops moving, it's time to press the next button.

Tifa's form may look jerky, but it's a kind note on the part of the developers to help make players complete this difficult mini-game. 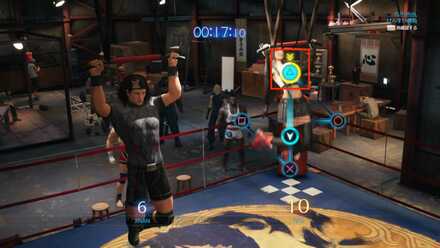 When Tifa gets fatigued, the button indications will appear again, and stop on a specific button. At this point, be sure to press the indicated button exactly 6 times quickly. If your presses are too slow, it might require a seventh press, which will waste precious time. And if you press the button a seventh time after you've already broken free of the fatigue, your chances of making a mistake will increase.

Don't worry about your opponent's score 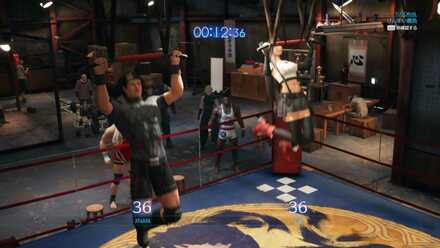 Although your opponent may sometimes overtake or tie with you, mental stability is key for completing the Pro Difficulty. As your opponent will generally move faster, Tifa's score will be exceeded during the match, but if you let that get to you and try to speed up, you'll make a mistake and ruin your shot. Jules will always fall just before the end of round two, so just keep it up and aim for the best score you can.

That being said, you'll want to have done at least 18 pull-ups by the end of the first round. It will be very hard to win with any less than that, so you may want to save yourself the trouble and just go ahead and restart at this point if you haven't managed to score that many.

To keep a level head, focus on Tifa completely through out the match, and if you keep consistent timing throughout, you'll be able to beat Jules and win the Peeress of Pull-Ups trophy. To defeat Jules' score, you'll generally need to hit a score of at least 45 Pull-Ups, so aim to break your own record instead of racing with Jules.

Register as a member and get all the information you want. (It's free!)
Login
Opinions about an article or post go here.
Opinions about an article or post
We at Game8 thank you for your support.
In order for us to make the best articles possible, share your corrections, opinions, and thoughts about "How to Win the Pull-Up Pro Difficulty on the Pull-Up Challenge | How to Get the Peeress of Pull-Ups Trophy" with us!
When reporting a problem, please be as specific as possible in providing details such as what conditions the problem occurred under and what kind of effects it had.