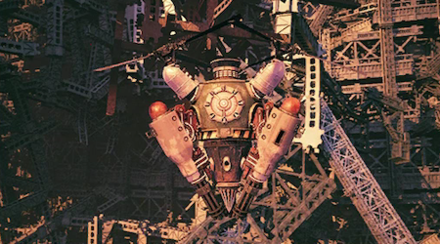 This is a guide to beating the Boss The Valkyrie in the game Final Fantasy 7 Remake (FF7R). This article explains The Valkyrie's attack patterns, weaknesses, and tips and strategies for defeating it on both Normal and Hard Mode.

The Valkyrie Stats and Information

No Enemy Skills can be learned from The Valkyrie.

The Valkyrie Abilities and Attack Patterns

Because The Valkyrie will stay in the air for much of the first Phase, it's recommended to focus on attacking with Barret. Equip Barret's weapon with Elemental Materia + Lightning Materia to maximize damage.

When it's Staggered, come in with Cloud or Tifa and use hard-hitting melee attacks. You can also use this opportunity to increase your party's damage output by using Cloud's Infinity's End.

During the battle, use Barret to deal damage with his lightning-infused attacks and Thundaga. Since Barret is also equipped with Warding Materia linked to Binding and Poison Materias, he will also gain resistance to the effects of Antipersonnel Gas.

Cloud will be your healer for this battle so be sure to equip him with Magic Up materia to increase his healing output and HP Up materia to make him endure more hits.

Save Tifa's MP so she can use Raise (or Arise) whenever an ally is downed. Since she is using her ATB charges mostly to revive downed members, which should not be happening a lot of times during the battle, use these charges to summon Ifrit and issue summon skills.

Tips & Strategies for Beating The Valkyrie 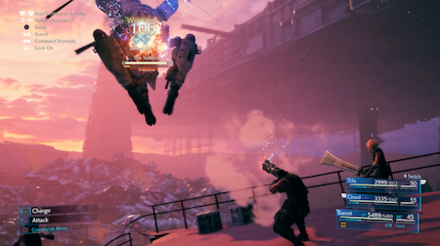 Like other mechs, The Valkyrie suffers from a serious weakness to Lightning Magic. It's suggested to equip all three party members with Lightning Materia before the battle, and be sure at least one is powered up to Level 3 by this point, unlocking Thundaga.

It's highly recommended to give Elemental Materia + Lightning Materia to Barret, so his bullets will deal extra damage to The Valkyrie throughout the fight. Since he's the only ranged fighter available, this will provide a steady source of damage even when The Valkyrie is out of reach.

Other combinations, like Synergy Materia + Lightning Materia, can also be helpful to stack on. 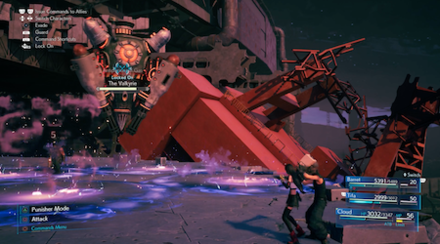 The Valkyrie's Antipersonnel Gas Ability can put your best fighters to Sleep in the middle of the fight. Its Poison effect can be remedied quickly, but it's best to ensure that you can avoid sleep using Accessories such as the Headband, or combinations like Warding Materia + Binding Materia which provide immunity to Sleep.

Hide Behind the Wall 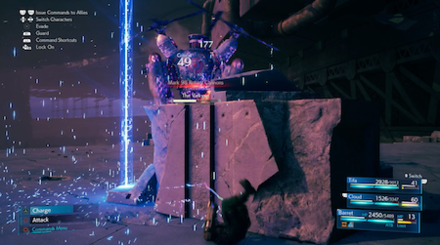 In the second phase of the fight, there will be a wall available which The Valkyrie's bullets can't penetrate. Use this when The Valkyrie is preparing an Ability, then come back around to fire off a stream of bullets with Barret.

That said, keep in mind that the wall can't protect from the laser attack from the satellite, so be sure to dodge this attack as it's charging up.

Pierce Limiter Override with the Laser 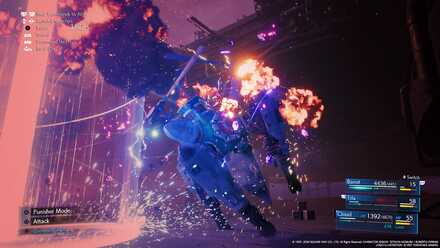 When The Valkyrie uses Limiter Override, it becomes resistant to all types of attacks, which also causes your attacks to have almost no effect on its stagger gauge.

Once the barrier is up, you can pierce it using its own laser satellite. Lure the satellite towards The Valkyrie until it starts to charge, then dodge to avoid receiving massive damage from the laser attack.

If the laser hits The Valkyrie, it will pop the Limiter Override barrier, deal a lot of damage to it, and will significantly fill its stagger gauge.

This is the most effective way to deal with the effects of Limiter Override as The Valkyrie will just use it again immediately once the effects of the previous barrier ends.

When it is using one of its attacks it will focus on the character you are controlling at the moment. You will be holding block most of the time otherwise so it is best to switch immediately and start attacking with your other party members.

Only Has Wind as Its Weakness

Unlike in normal mode, Valkyrie has no weakness to Lightning magic this time around. Make sure you have Wind materia equipped and time your spells right to make sure they hit!

The Valkryie fight functions very simiilarly to its Normal Mode counterpart so your main objective is still to hit its weakpoints and stagger it. However, the inability to use items to recover MP means you must be wary of your surroundings to minimize how much you use healing magic.

Be Sure To Bring Healing Materia

On Hard Mode, the Valkyrie's attacks are incredibly strong and can trap a character leading to their death, so be sure to have Healing and Revive Materia equipped to prepare for the worst case.

Be watchful for its Antipersonnel Gas as well, as it will inflict Sleep and Poison on whoever it hits. To combat this, have a Cleansing Materia equipped on one of your characters.

Stay Away From Its Laser!

The laser that appears on the battlefield during phase 3 can deal around 5000 damage to anyone it hits, possibly leading to death, so more than before make sure to keep away from it!

See more comments (5 Comments)
Opinions about an article or post go here.
Opinions about an article or post
We at Game8 thank you for your support.
In order for us to make the best articles possible, share your corrections, opinions, and thoughts about "How to Beat The Valkyrie | Boss Fight Guide (Normal & Hard)" with us!
When reporting a problem, please be as specific as possible in providing details such as what conditions the problem occurred under and what kind of effects it had.