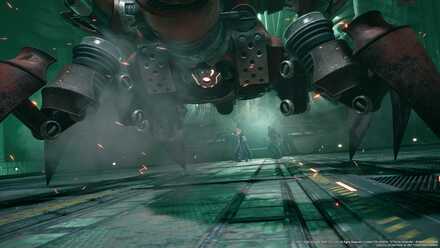 This is a guide to beating the boss Scorpion Sentinel from Chapter 1 of Final Fantasy 7 Remake. This article explains Scorpion Sentinel's attack patterns, weaknesses, and tips and strategies for defeating it on both Normal and Hard mode.

A large sentry weapon manufactured by Shinra's Advanced Weapon Division. Highly mobile due to its many legs and armed with an array of heavy weapons. Deployed at Mako Reactor 1 to protect the core.

Its stagger gauge does not fill while its force field is deployed.

No Enemy Skills can be learned from Scorpion Sentinel. 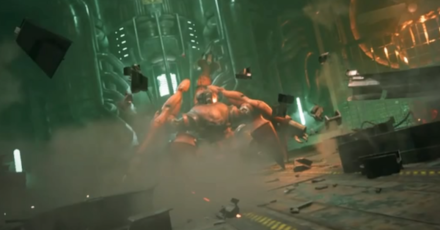 Each time Scorpion Sentinel takes a set amount of damage, it will change its form and its attack pattern. Keep in mind how to handle each of its forms before wrangling with it.

Summary of each form

How to Pressure Scorpion Sentinel

While you'll want to change to Cloud for the second phase when the barrier is up, Barret is the best character to control for this battle.

Use Barret to Avoid Getting Interrupted

Many of the Sentinel Scorpion attacks are close-ranged and will interrupt Cloud's attack if he's too close.

You can also continue attacking it when it's on the wall, so Barret has the clear upperhand with his range, Thunder and Cure.

Use Cloud for Phase 2 and During Stagger

During the second phase, when the barrier is up, the Sentinel Scorpion will take reduced damage from bullets and be immune to Thunder, so you should switch to Cloud and attack from behind.

If you manage to Stagger the boss, you'll also want to switch to Cloud and go into Punisher mode to deal out some serious damage.

Scorpion Sentinel's main weakness is Thunder Magic. Barret can use Thunder, so either switch to Barret and attack, or use the ◯ button to select the Thunder command.

Balancing attacking and defending is key 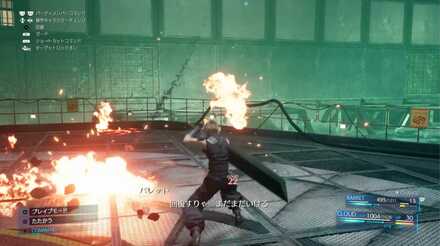 Scorpion Sentinel uses a variety of ranged attacks, and Cloud in particular can have his HP run ragged in a matter of moments. Instead of simply pushing hard offensively, it's important to Guard sometimes and play defensively to limit the amount of damage your party takes.

When bound, switch characters and attack 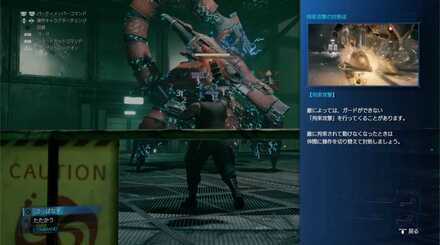 When the barrier is up, attack from behind 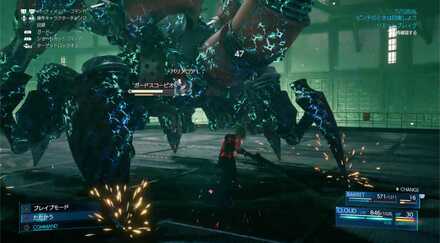 In Scorpion Sentinel's 2nd Phase, it will set up a barrier which can deflect attacks. On its tail end, the Field Generator will be visible, and is vulnerable to attacks. Use Abilities and Magic to deal damage.

Hide from Tail Laser behind debris 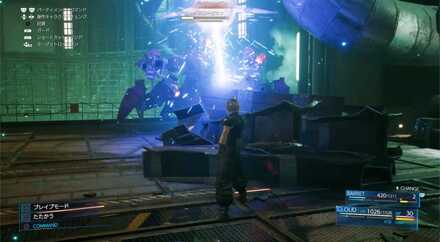 In its 3rd Phase, Scorpion Sentinel will repeatedly gather electricity and fire off its Tail Laser. It deals heavy damage, in Normal Mode averaging around 600. The scattered surrounding debris can protect you from the attack, so when the animation for the attack begins, be sure to start searching for a place to hide.

When it's on its last legs, destroy it 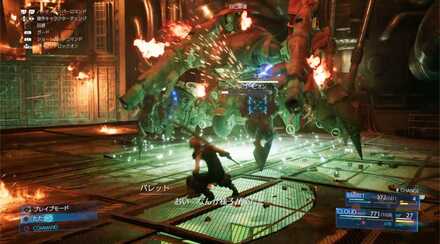 When Scorpion Sentinel has only a small amount of HP remaining, it will begin to heal itself while attacking in a frenzy. By destroying its left and right legs, you can cause it to falter and stop moving, so be sure to focus your most powerful Abilities on the legs.

Hard to fill its Focus Gauge 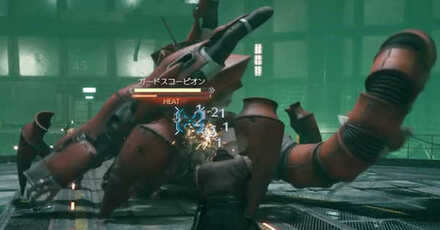 Scorpion Sentinel's Focus Gauge takes a long time to fill up. Simply attacking haphazardly will make the battle long and arduous – it's best to aim for a Stagger, which will provide an opening to pull ahead in the battle.

After it's staggered, lay on the damage 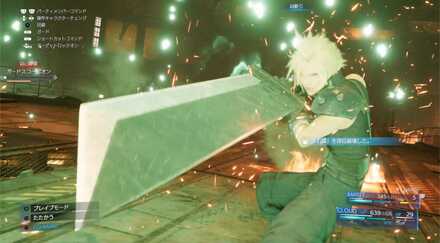 If you've pulled off the tough feat of Staggering Scorpion Sentinel, seize your chance to attack. When attacking with Cloud or Barret's Unique Ability, your ATB Gauge will be maxed out, so rain down hard on it with Abilities and Magic.

Don't forget – after you've Staggered an enemy, your Limit Gauge will fill up. When it's at max, you'll be able to do a mega-powerful Limit Break attack, so save up to unleash at the end of the fight.

As MP needs to be managed right and most of your attacks outside of Stagger will be standard attacks, it is best to rely on weapons with a balance of Physical Attack and Magic Attack. Weapons like Buster Sword and Gatling Gun are recommended. You can also use Big Bertha for more damage on Physical Attacks if you feel like you do not need the extra MP and Magic attack.

Supreme Bracers are encouraged for both Cloud and Barret, as Scoropion Sentinal's hard to avoid attacks are physical. You'll be blocking a lot of these attacks so increasing your defense is a must.

With Barret as your primary healer, Revival Earrings are a solid choice, as having Barret down can make the fight much more difficult as you can not use items to revive. Crescent Moon Charm can be good for Cloud as you will be using Barret for most of the battle. And Survival Vests are also solid choices to further up your party's Defense.

Having Elemental binded with Lightning for both Cloud and Barret is the best offensive choices. This will let you deal more damage without having to use any MP. Charkra is also a must have for them both. It will let you heal without consuming any MP. Revival is also important to have. Without Phoenix Down, this is the only way to revive any fallen teamamtes.

Steadfast Block is a good materia to have on Cloud as he will be tanking and blocking most of the damage. While ATB Assist will ensure Barret can follow up after Cloud uses Focused Thrust twice to stagger the Scorpion Sentinel. And ATB Boost will ensure Cloud will have enough ATB to do so. It can also be used after Staggering to use Infinity's End.

For Barret, he will need Healing binded with Magnify to be able to maximize the MP he uses for healing. Refocus is another great materia to have. It grants good stats and with its Refocus Limit will significantly boost Barret's damage output.

Fat Chocobo is good on Cloud as it will give him stats to make him tankier and Leviathan is a good summon to use against the Scorpion Sentinel.

In battle, control Barret and keep attacking with your basic attacks from afar. For the first phase, keep pelting it with attacks and wait for it to use Death Grip on Cloud, then use Thunder or any high damaging ability to save Cloud and to knock it off balance. When this happens use Focused Thrust and Focused Shot to put it into Stagger.

For the third phase, wait for it to use its Tail Laser, but beware: It shoots it twice in Hard mode. Use Thunder or high damaging abilities to knock it off balance, then use Focused Thrust and Focused Shot to put it into Stagger once more.

You will want to save some MP for the last phase. During the last phase use all your damaging abilities and Thunder to break its legs to put it into Stagger.

Can Receive One of Barret's Manuscripts 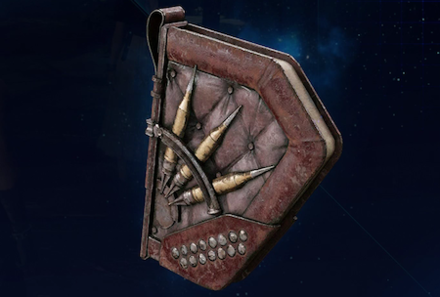 If you take down the Scorption Sentinel on Hard Mode, you will receive Barret's Manuscript, Sharpshooter's Companion Vol. IV. Every Hard Mode boss fight will drop a Manuscript for a character, so those looking to max out their skill points should give Hard Mode a go!

Use the Chakra Materia to Heal

While playing on Hard Mode you are unable to use items so preserving your MP becomes vital. You want to save your MP for filling the Scorpion Sentinel's focus gauge with lightning magic, so when you are low on HP use the Chakra materia instead.

You can also equip Cloud's Mythril Saber with its 50% MP Regeneration boost to go wild with magic.

Beware of its Second Tail Laser! 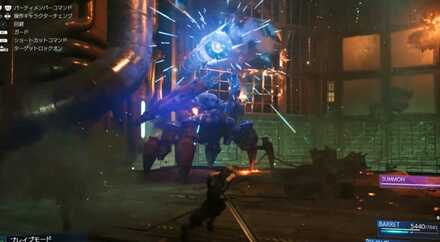 Another new addition on Hard Mode is that the Scorpion Sentinel will use its Tail Laser attack a second time immediately after the first. Just like with the first attack, quickly take cover again to avoid damage.

In order for us to make the best articles possible, share your corrections, opinions, and thoughts about 「How to Beat Scorpion Sentinel | Boss Fight Guide (Normal & Hard Mode) | FF7 Remake」 with us!