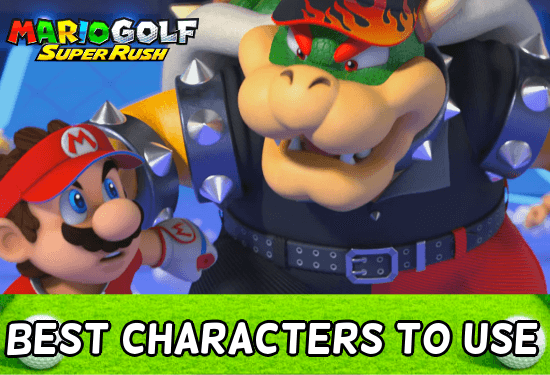 This is a guide to the best characters for every game mode in Mario Golf: Super Rush for the Nintendo Switch. Read on to learn who is the best character to use in Standard Golf, Speed Golf, and Battle Golf and view a complete tier list of all the characters!

This is a tier list of the best characters in Mario Golf: Super Rush. Find the best S-Tier golfers to conquer any course you come across. You can also test your golf skills by selecting one of our more challenging C-Tier characters.

Best Characters for Every Game Mode

Additionally, his Special Dash is easy to steer and has a good area of effect, which is ideal for beginners to make use of in modes such as Speed Golf and Battle Golf.

Just avoid using Bowser for complicated curve shots or in harsh weather conditions, and you should stomp on the competiton easily.

Rosalina is another great, aggressive choice for every game mode. Her base 223 drive is the strongest of any non-Power specialty character, which allows her a lot of range in all game modes. Her Stamina and Speed are also a decent level.

Control is her only below average stat, but utilizing her Special Shot's ability to disrupt ball trajectory and ball spin will make her opponents have even worse Control at crucial strokes.

Rosalina can also float over water and lava for a brief period of time, which would help prevent players from accidentally falling in.

How to Use Rosalina: Character Stats & Special Abilities

Mii Character Due to Customization

Of course, your Mii Character will be the best character for any game mode you customize its stats towards while playing the Golf Adventure story mode. It also helps that the Mii Character's Power level caps at 360, which is far beyond the max Super Star stat for any character currently playable in the game.

Due to the great movement of his Special Dash, Yoshi will definitely be one to look out for in the Battle Golf stadium and Speed Golf courses. While you can't use the Special Dash twice consecutively due to Yoshi's lower Stamina, Yoshi being the fastest character in the game does make up for that.

Once you unlock the star club sets of Boo through earning character points, he'd be a worthy selection in Standard Golf modes due to his Spin reaching the max level and the max number of twists. Spin specialty characters are only recommended for players who are proficient in curve shots or who want to learn how to add spin to their shots. It's a great golfer skill to develop with Boo.

The reason you'd want to choose Boo over Bowser Jr., the other Spin specialist, is due to Bowser Jr.'s completely lackluster Special Shot. Boo, on ther other hand, can disrupt opponent's ball trajectories on important strokes.

How to Use Boo: Characters Stats & Abilities

Register as a member and get all the information you want. (It's free!)
Login
Opinions about an article or post go here.
Opinions about an article or post
We at Game8 thank you for your support.
In order for us to make the best articles possible, share your corrections, opinions, and thoughts about "Best Character Tier List: The Best Character for Every Game Mode" with us!
When reporting a problem, please be as specific as possible in providing details such as what conditions the problem occurred under and what kind of effects it had.