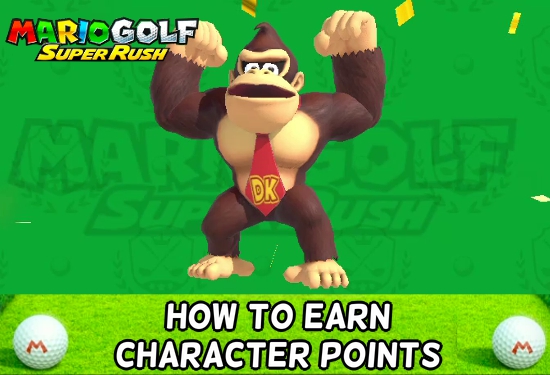 What Are Character Points? 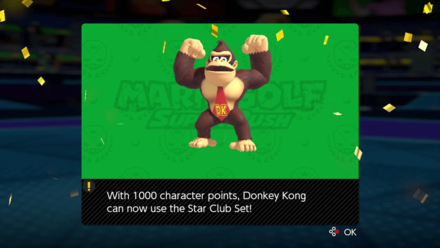 Character Points are earned from using a character in Standard, Speed, or Battle Golf in Mario Golf: Super Rush. Playing and investing time in each Mario character rewards the character with a star club sets that boosts the character's Power and Spin stats.

Each character starts off with the standard club set and has 2 star club sets for them to unlock. If the player wants to unlock a star club set for a character, they have to spend time earning character points as that character.

Below is the list of star club sets and the respective number of Character Points needed to unlock them:

How to Check Character Points 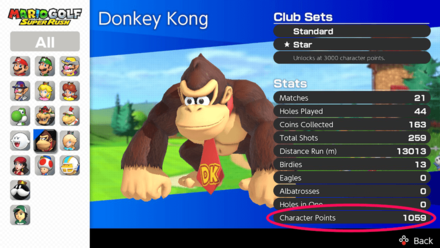 You can see the stats for each character, including the Character Points they have accumulated so far by accessing the Play Stats section from the Main Menu. Select Characters and then choose a character to see their Character Points listed at the bottom. 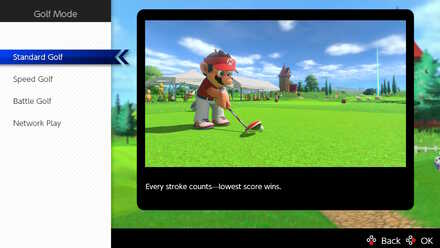 The main way to earn Character Points is through playing any Golf mode in the game including Standard Golf, Speed Golf, and Battle Golf. The Character Points you earn will only be transferred to the character that you played as, so it's best to decide first on which character you would want to grind Character Points.

Scoring in Each Hole 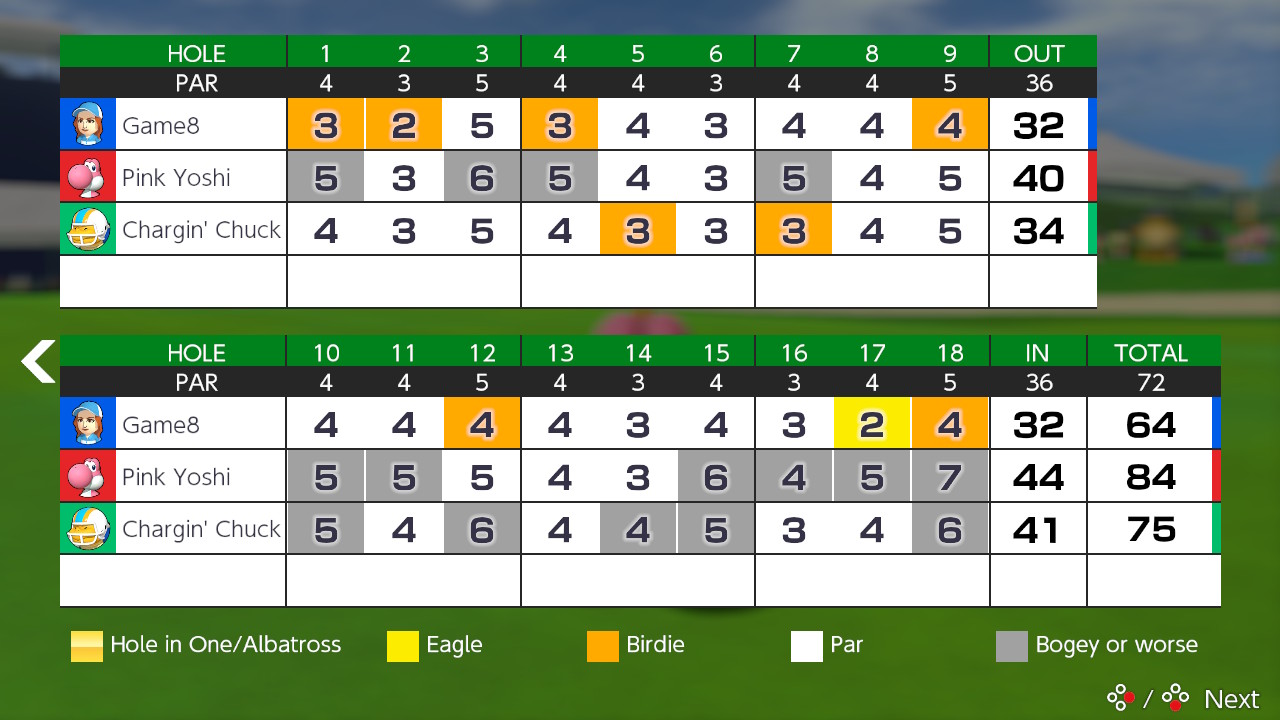 The amount of Character Points that you receive depends on your score at a hole. Earn character points by doing the following:

Solo Challenges can potentially give you more Character Points due to their length and opportunity to score as many points as you can. Solo Challenges are simple, but they can also make you better at the game while still rewarding you for using a character.

How to Farm Character Points

Do a Coin Run in Battle Golf 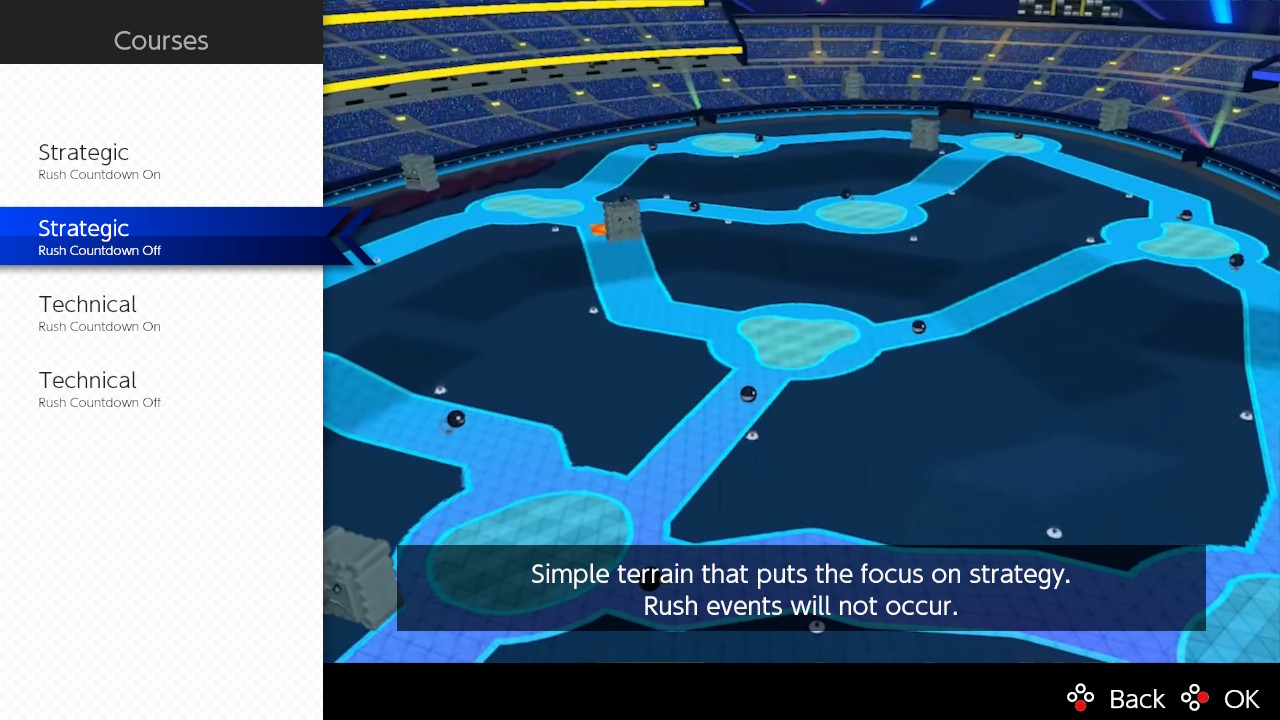 A quick way to farm character points is by playing Battle Golf and focusing only on collecting coins. Load up Battle Golf - Strategic Mode with No Rush Countdown Off. Rush events are randomly generated. They can give you a speed boost with immunity or they can make the floor slippery, so it's best to go balanced and just remove them. 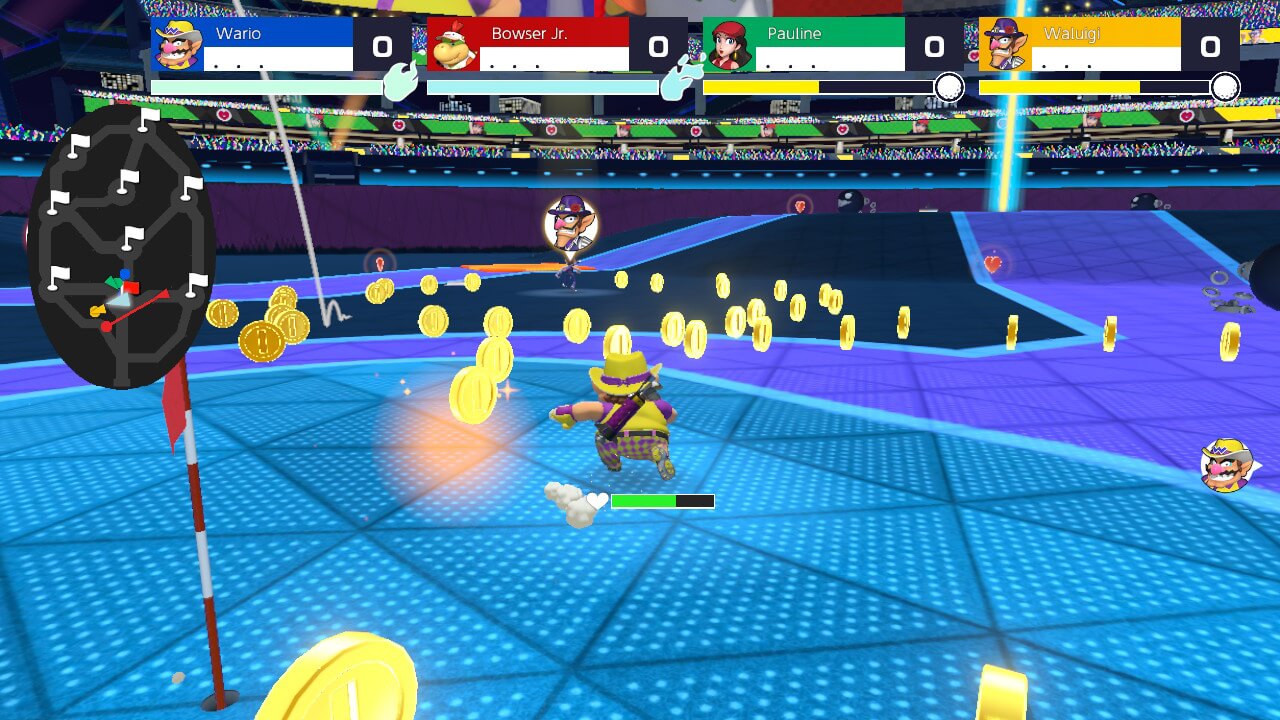 In Battle Golf - Strategic Mode, focus on knocking out your opponents and collecting the coins they drop. You can do this by going to the Bob-ombs lined around the arena and hitting them to your opponents. Your character automatically aims at the nearest target and hits multiple Bob-ombs if there are multiple targets in that direction. Opponents hit by Bob-ombs or other obstacles drop coins, which you can collect.

A round of Battle Golf with CPU should last around 3 mins. Doing this method, you earn around 400-600 character points, per round, for the Mario character you are playing as. Note that an opponent won't drop anymore coins after getting hit by an obstacle 4 times, so the maximum amount of coins each opponent drops only equates to 300 character points earned. 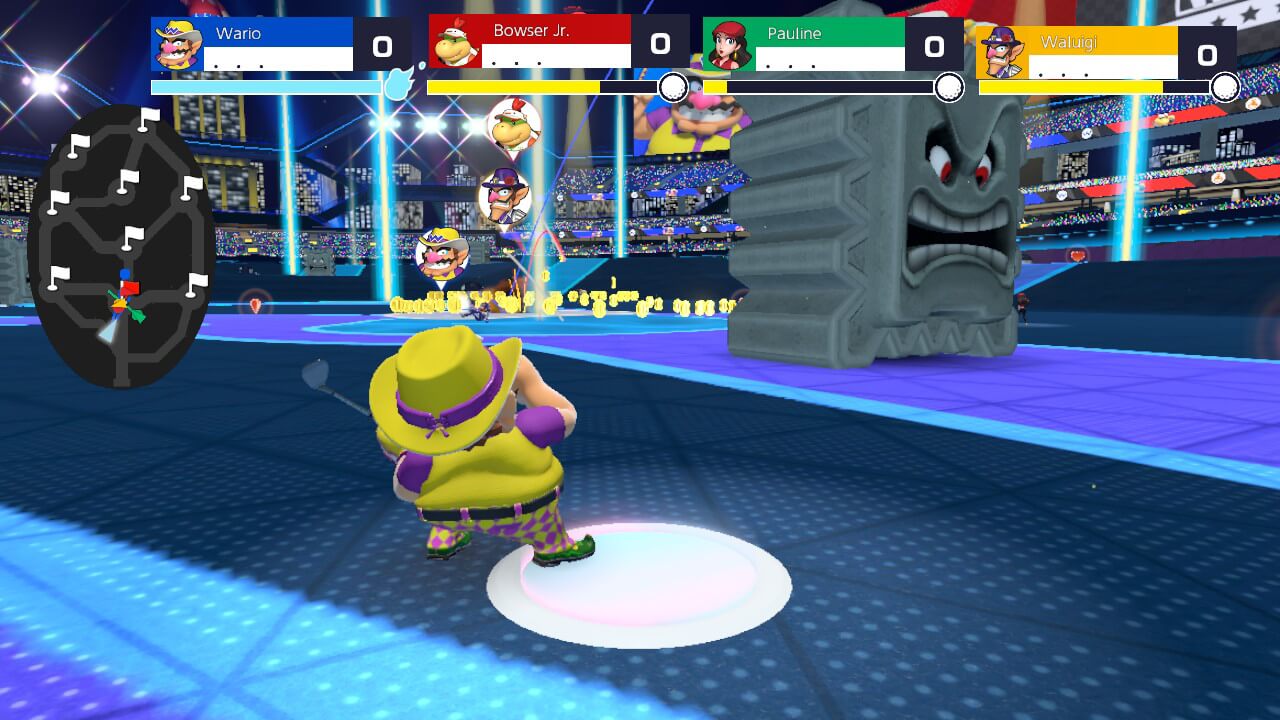 About half of the coins you will collect during a coin run of Battle Golf will be from the first hole, as the opponents split up in varying directions afterward.

If you have two controllers, you can farm without CPU 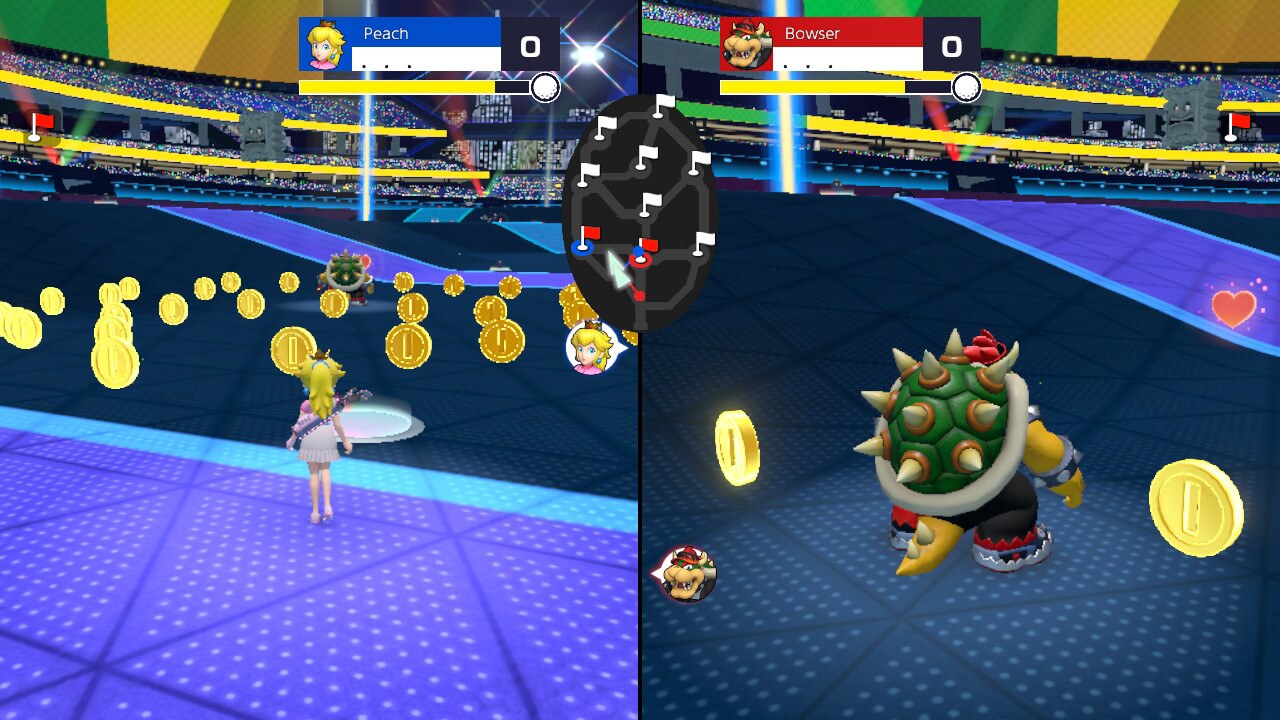 If available, select the two controllers option then limit the total number of players to 2, so that the game has no CPU. Doing so will allot you an unlimited amount of time to farm coins. With these settings, just have the 2 character farm coins from one another.

Hit 1 character up to 4 times with Bob-ombs and collect the coins they drop each time, and do the same with the other character. This method earns the 2 characters around 270-300 character points each.

Use the Restart Method 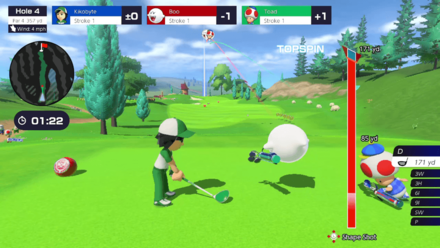 There is another faster (yet repetitive) method for earning Character Points quickly. First thing you'll have to do is select the Stroke Play option and to play Standard Golf on a simple course such as the Rookie Course or Bonny Greens. The rules don't really matter, but you have to have 4 HUMAN controlled players to make this method more efficient. Don't worry about the lack of controllers, as you can have 4 people play using the same controller anyways. Once the match starts, pause the game and choose to Restart from the First Hole option. 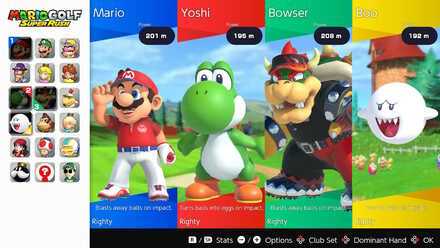 Each player controlled character earns 10 Character Points whenever they start a hole. Restarting the hole will grant the characters 10 points again. By repeatedly restarting the hole, you can rapidly earn Character Points for up to 4 characters at a time without so much as swinging your golf club. This means that assuming a character starts at 0 points, you'll need to restart the hole 100 times to obtain the Star Set, and an additional 200 times for the Super Star Set.

Aim for a Hole-in-One 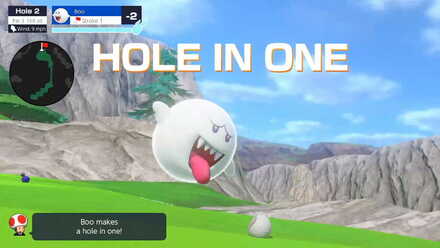 Scoring hole-in-ones is an alternative method to farming points since each hole-in-one gives a whopping 100 points. You'll want to play Standard Golf and start on a hole that has a short distance between you and the hole, making it possible to score the hole-in-one. If you fail to land the hole-in-one, just restart the hole so you'll get 10 points and another opportunity for the hole-in-one.

Set your starting hole to these courses. Aim for a hole-in-one on the first shot! If you don't make it, simply restart to gain 10 Character Points and try again! 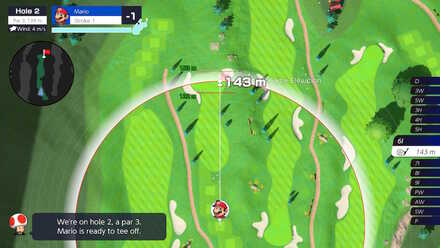 Tips for this Hole

Hole 2 is a short distance hole, so use the 6I for a potential hole-in-one, or at least put yourself in a good position for a Birdie on stroke 2. 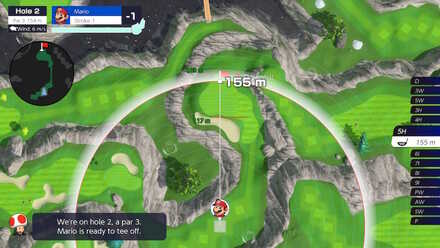 Tips for this Hole

Hole 2 is a short distance hole. Rather than curving the shot around the bend, aim straight for the hole with the 4H. Account for wind, put backspin on the ball, and with luck you can get a hole-in-one. If it misses, you can go for a Birdie on stroke 2.

Register as a member and get all the information you want. (It's free!)
Login
Opinions about an article or post go here.
Opinions about an article or post
We at Game8 thank you for your support.
In order for us to make the best articles possible, share your corrections, opinions, and thoughts about "How to Earn Character Points" with us!
When reporting a problem, please be as specific as possible in providing details such as what conditions the problem occurred under and what kind of effects it had.